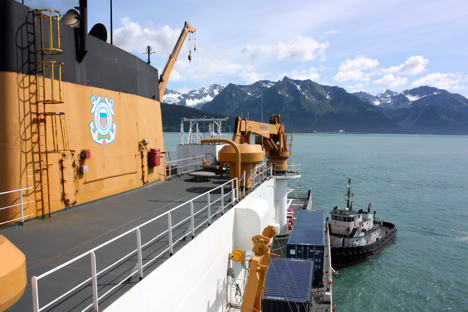 On July 29, 2011, The U.S. Coast Guard Cutter Healy docked in Seward, Alaska, marking the end to the field component of NASA’s ICESCAPE mission. The multidisciplinary group returns to their land-based labs to apply the data toward improving of space-based observations, and to finish piecing together the story of how sea ice and ocean systems impact Arctic ecology. Continue to follow the mission’s news at nasa.gov.

Before heading to the Anchorage airport, a few scientists on board shared some parting thoughts about the ICESCAPE mission. 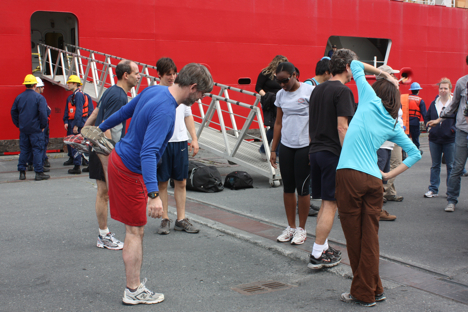 Scientists stretched their legs on land after disembarking from the Healy on July 29, 2011 after five weeks at sea. Credit: NASA/Kathryn Hansen

The most interesting thing I learned during ICESCAPE was the phytoplankton community could be represented by so many major algal groups, like diatoms, dinoflagellates, coccolithophorids, silicoflagellates and picoplankton. One thing I will never forget about ICESCAPE will be walking over the desolate ice in the Beaufort Sea (a truly surreal landscape) with almost 2 miles of water below me!

One thing I will never forget about ICESCAPE was that people liked my version of “Hotel California” much more than I had expected; And they were nice enough to tell me they liked it!

I finally got to sail on the Healy after ten years being away from oceanographic related work, which completes the trifecta of sailing on both polar class ships – Sea and Star and now the Healy.  It was a wonderful experience and the beauty was I could share things with friends and family in a timely fashion, since email was readily available. Ten years ago, it was NOT!!

One thing I will never forget about ICESCAPE is my experience taking a melt pond core and during the process having my boots flooded with ice cold water but I still enjoyed every moment of it!

One thing I will never forget about ICESCAPE is the crew of the USCGC  Healy.  Everyone from the Captain down to the non-rated personnel  displayed a tremendous dedication to the science mission.  The marine  science technicians had perhaps the most direct involvement with the  science team.  They would do everything from acting as liaisons between  the science team and the crew to pitching in with science operations  on the ice.  Members of the deck crew served as riggers and bear  watches to get our gear on and off the ice and make sure that we could  operate safely.  Science operations were conducted around the clock  with many science team members working in 12 hour shifts.  It was  always a huge boost to morale whenever a member of the galley crew  would stop by the main lab at 2:00AM carrying a tray of freshly baked  cookies.  Occasionally science equipment would break down or become  damaged while working in the Arctic.  Members of the EM shop were  always available to do what they could to help us repair instruments,  even going so far as to machine replacement parts for us.  Members of  the engineering division performed at the highest level of  professionalism to keep the engines running, and the power on so that  we could reach our science stations and run our instruments. Captain  Havlik and the senior officers took a personal interest in science  operations and worked closely with members of the science team to  identify suitable locations for ice stations and small boat  activities.  The science team is composed of many very smart and well- respected researchers but ultimately the success of the 2011 ICESCAPE  mission was the result of the shared sense of duty between members of  the science team and the ship’s crew. 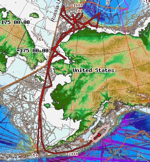