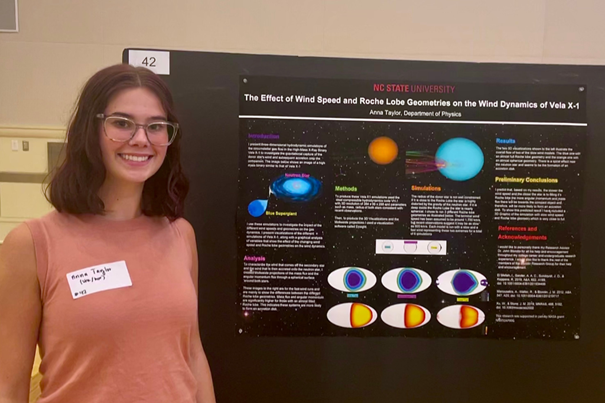 Anna Taylor standing next to a poster called “The Effect of Wind Speed and Roche Lobe Geometrics on the Wind Dynamics of Vela X-1″ from NC State University.Anna Taylor, a former NASA intern from the Goddard Space Flight Center in Maryland, wanted to know as much as she could about the sky full of stars she saw every night. In the 9th grade, Taylor competed in her first Science Olympiad, a premier team STEM competition, and realized that physics and astronomy was her ultimate passion.

The Stars are Aligning

“I believe in NASA’s initiative, and I want to contribute to our understanding of the universe,” Taylor said.

Currently, Anna Taylor is a senior at North Carolina State University where she is majoring in Physics and double minoring in Mathematics and Computer Science.

She worked with the Exoplanets and Stellar Astrophysics Lab which studies the formation and evolution of stars and planetary systems using advanced telescopes and theoretical techniques.

By identifying statistical trends linking stars to emissions, she would determine factors for the stars in the samples that she is given. Given this project, she would further NASA’s mission by researching these stars and help everyone understand how the universe is made, what else is out there, and how we all fit in.

“This internship not only means I get to do research in coding and astrophysics which are my passions but also gives me an opportunity to meet so many smart and interesting people and learn all about what they do at NASA,” Taylor said.

Take the next step in becoming a NASA intern like Anna and learn more about the opportunities NASA has. Additionally, feel free to find out more about other NASA interns, such as Shalya Wilhelm’s experience of learning how to create oxygen on the moon for astronauts using lunar soil!