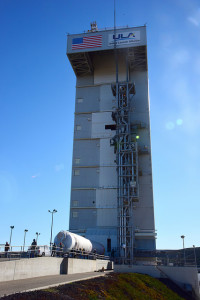 NASA’s Insight spacecraft is one step closer to beginning its journey to Mars now that it has arrived at Vandenberg Air Force Base in California. The lander was delivered last night aboard a U.S. Air Force transport aircraft, then was offloaded and moved to the Astrotech payload processing facility. Today it is being removed from its shipping container. Meanwhile, at Space Launch Complex 3, the United Launch Alliance Atlas V first stage booster (pictured, right, photo credit NASA/Mark Mackley) was hoisted from its transport trailer into vertical position within the pad gantry.

Insight, short for Interior Exploration using Seismic Investigations, Geodesy and Heat Transport, will study processes that formed and shaped Mars. Its findings will improve understanding about the evolution of our inner solar system’s rocky planets, including Earth. The lander will be the first mission to permanently deploy instruments directly onto Martian ground using a robotic arm. The mission is scheduled to launch from Vandenberg’s Space Launch Complex 3E in March 2016 and land on Mars in September 2016.