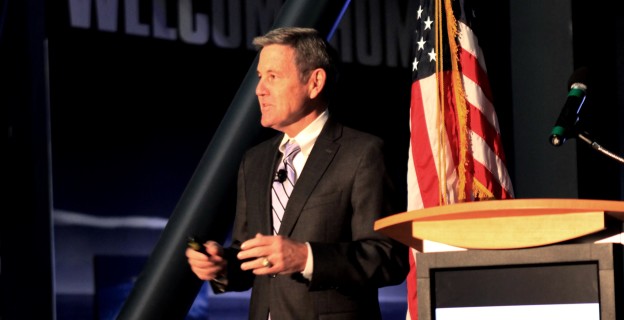 On March 1, Kennedy Space Center Director Bob Cabana presented an update on current and future activities at the Florida spaceport. His report was part of the annual Center Director’s Update to community leaders, which took place in the Space Shuttle Atlantis facility at Kennedy’s visitor complex. The event was attended by local government representatives, along with individuals from business and industry.

Cabana explained that the space center now is a 21st century, multi-user spaceport with a great deal of work going on in support of current and future space program initiatives.

“We are really starting to pick up speed,” he said. “We’ve turned the corner and we are moving off to an absolutely outstanding future.”

That theme was backed up with a video presentation on current work at Kennedy titled, “KSC is Go!”

Speaking under the shuttle Atlantis, Cabana noted that the Florida spaceport’s main focus has evolved from a center focused primarily on flying a vehicle to utilize space close to Earth and exploring beyond Earth, to establishing a permanent presence in space.

“When we went to the moon, we stayed for a couple of days and took some rocks home,” said Cabana, a former space shuttle astronaut. “We explored. But we want to be pioneers. Explorers leave a nice, safe environment, they go off to an extreme environment for a short period of time, gather information and return to that safe environment.”

With crews living and working aboard the International Space Station since 2000, Cabana pointed out that a presence in space has already been established.

“Exploration is challenging, it’s hard,” he said. “What we are doing in space with humans really is a challenge. But we want to go beyond low-Earth orbit. We want to go to Mars.”

“We don’t just want to go explore,” he said, “we want to pioneer, we want to establish a presence in the solar system.”

Cabana referenced the many directorates at Kennedy that are supporting ongoing and future efforts. He then invited guests to speak with experts working displays explaining work at the space center.