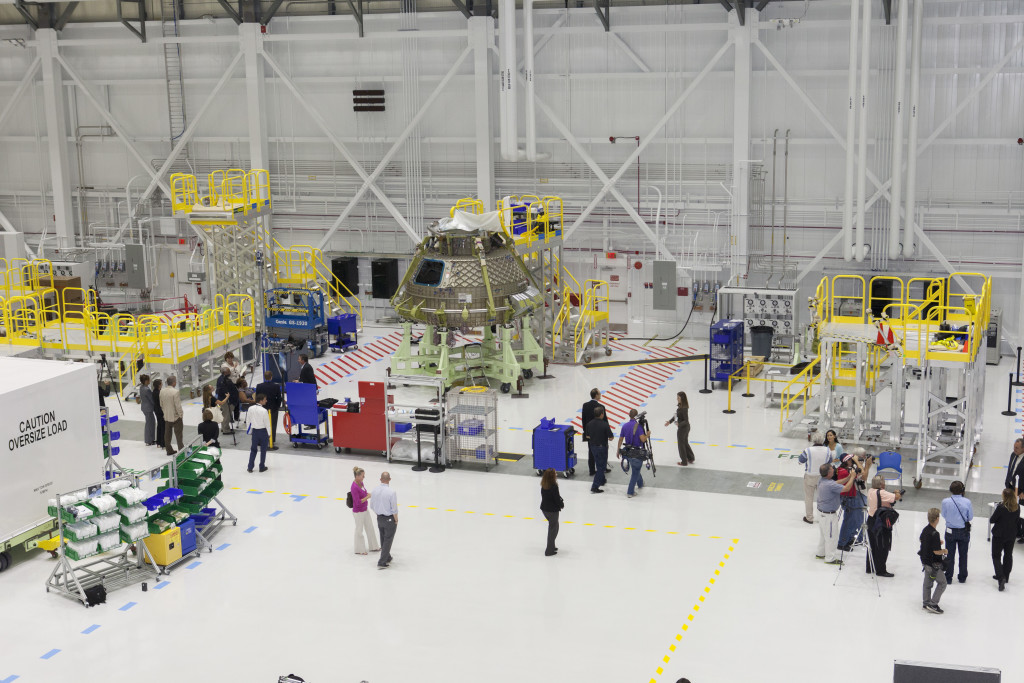 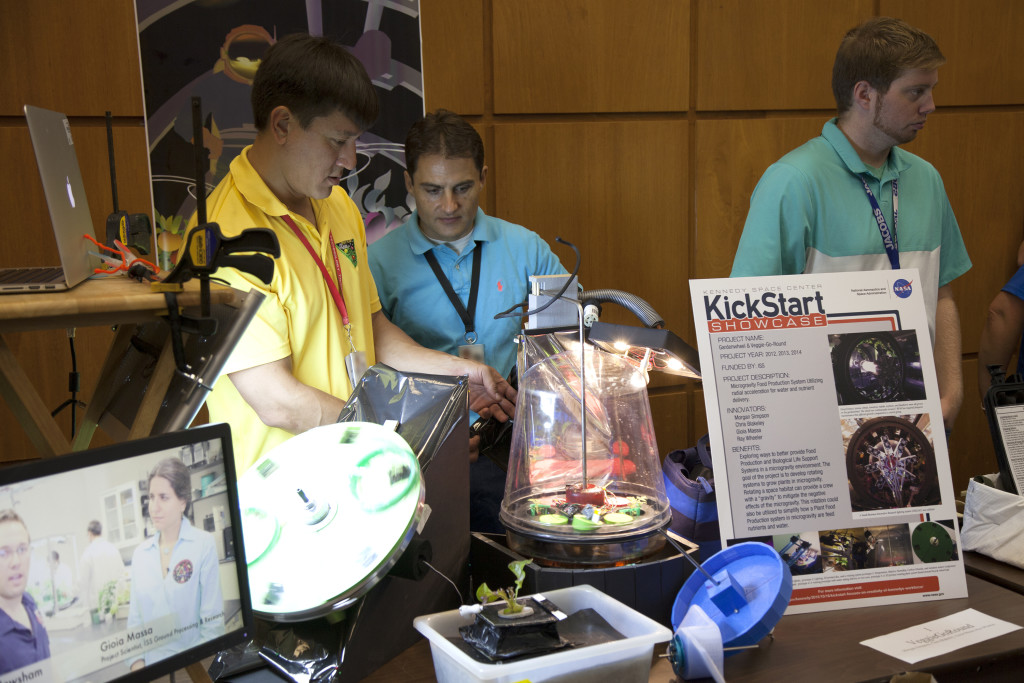 NASA’s accomplishments are built on a foundation of innovation. The seeds of new ideas and the painstaking development of new technologies are critically important to the agency and to Kennedy Space Center, which celebrated the spirit of innovation by hosting a KickStart Showcase on July 12. 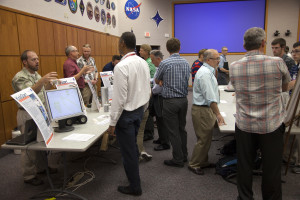 The KickStart Showcase was a roundup of the more than 50 winners of KickStart competitions since they began in 2012.

The purpose of the KickStart Showcase was to display all past and present KickStart projects. The showcase was the first of its kind, bringing together innovators from the past four years of competitions. The KickStart Competition is held annually at KSC’s Innovation Expo. The Competition gives teams a chance to compete for up to $5,000 to advance their innovative ideas.

During these annual competitions, innovators show off their technologies, and visitors in attendance vote for their favorite project(s). Each project received up to $5,000 to fund their innovative ideas. Funding has been provided by the following programs: International Space Station, Commercial Crew, Ground Systems Development and Operations, Launch Services, and Research and Technology (Royalty Funds).

Similar to the KickStart competition format, the KickStart Showcase encouraged visitors to vote for their favorite. The winners will have the opportunity to star in their own short video that will be shared throughout the agency.

The next KickStart Competition will be held in November in conjunction with Kennedy’s annual Innovation Expo.

A baker’s dozen of zinnia flowers that were grown on the International Space Station were unpacked and recently dissected inside the Veggie flight laboratory in the Space Station Processing Facility at NASA’s Kennedy Space Center in Florida. An additional dozen zinnias were given to the six crew members on the space station as souvenirs.

A team of NASA and contractor scientists in the ISS Ground Processing and Research Project Office carefully removed the seeds from each of the thirteen zinnia plants and the zinnias from a ground control experiment. The seeds were examined under a microscope and then packaged in small vials and labeled for further analysis.

At Kennedy, the seeds will undergo a microbial analysis and a germination test to determine if they could be sent to the space station for another growth cycle in the Veggie system.

The zinnia seeds were delivered to the space station as part of the Veg-01 experiment in April 2014. The plant pillows containing the zinnia seeds were activated Nov. 16, 2015, in the Veggie plant growth system by NASA astronaut Scott Kelly during his one-year mission. The zinnias were watered and their growth was monitored for 90 days. The plants were harvested on Feb. 14, 2016, packaged and returned to Earth on the SpaceX CRS-8 Commercial Resupply Services Mission. Funding for Veggie is provided by the Space Life and Physical Sciences Research Applications Division at NASA Headquarters.

NASA is maturing Veggie technology aboard the space station to provide future pioneers with a sustainable food supplement – a critical part of NASA’s Journey to Mars. As NASA moves toward long-duration exploration missions farther into the solar system, Veggie will be a resource for crew food growth and consumption. It also could be used by astronauts for recreational gardening activities during long-duration space missions.

Installation of new work platforms for NASA’s Space Launch System rocket and the journey to Mars reached the halfway point this week inside the Vehicle Assembly Building (VAB) at the agency’s Kennedy Space Center in Florida.

The F North and South platforms were lifted by crane from the transfer aisle floor of the VAB, slowly raised into position, and attached to rail beams on the north and south walls in High Bay 3 on July 15 and 19. The rail beams provide structural support and contain the drive mechanisms to retract and extend the platforms.

The F-level platforms will provide access to the SLS Core Stage (CS) Intertank and facilitate CS Intertank Umbilical mate operations. Located on Platform F, the “F-1” multi-level ground support equipment platform will be used to access the booster forward assemblies and the CS to booster forward attach points. The upper level of F-1 will be used to remove the lifting sling used to support forward assembly mate for booster stacking operations.

A total of 10 levels of work platforms, 20 platform halves altogether, will surround the SLS rocket and Orion spacecraft and enable testing and processing for the uncrewed Exploration Mission 1, and deep-space missions, including the journey to Mars. 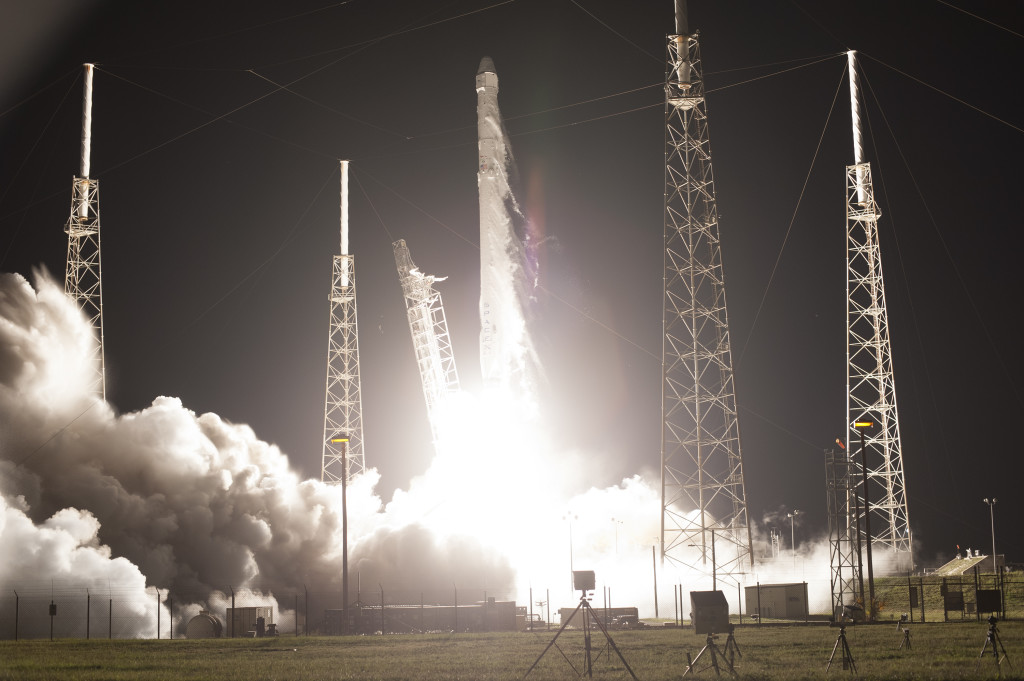 The SpaceX Falcon 9 rocket lifted off at 12:45:29 a.m. EDT and Dragon has begun its journey to the International Space Station with an arrival on Wednesday, July 20. (Photo credit: NASA/Tony Gray) 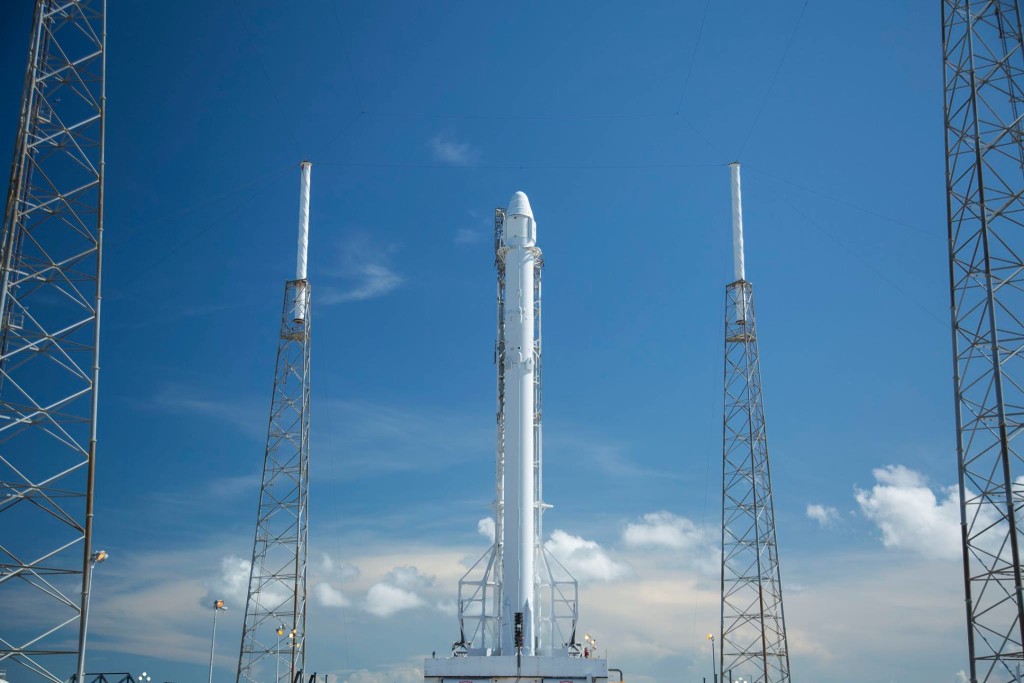 The SpaceX Falcon 9 rocket and Dragon spacecraft are standing today at Space Launch Complex 40 awaiting liftoff. Launch is scheduled for 12:45 a.m. EDT. The weather forecast calls for a 90 percent chance of acceptable conditions at launch time. Continuous countdown and launch coverage will begin at 11:30 p.m. EDT on the NASA Launch Blog and on NASA TV.

The Dragon spacecraft is loaded with about 5,000 pounds of experiments and materials for the International Space Station. The payloads include a docking adapter needed for future spacecraft headed to the station including those from partners Boeing and SpaceX for NASA’s Commercial Crew Program. The spacecraft also carries hardware and experiment elements needed for dozens of research investigations that will take place in orbit during Expeditions 48 and 49. You can read details about the experiments here and details about the docking adapter, IDA-2, here. Photo credit: SpaceX

For the latest information on launch status, visit NASA’s SpaceX Launch Blog or the Commercial Resupply website. Live countdown coverage begins at 11:30 p.m. Sunday, July 17 on NASA Television as well as on the blog.

The SpaceX Falcon 9 rocket is carrying the Dragon spacecraft, packed with nearly 5,000 pounds of supplies and payloads to the station, including critical materials to directly support dozens of the more than 250 science and research investigations that will occur during Expeditions 48 and 49. For more details about the mission, you can look over the press kit at https://www.nasa.gov/sites/default/files/atoms/files/spacex_crs9_press_kit.pdf. 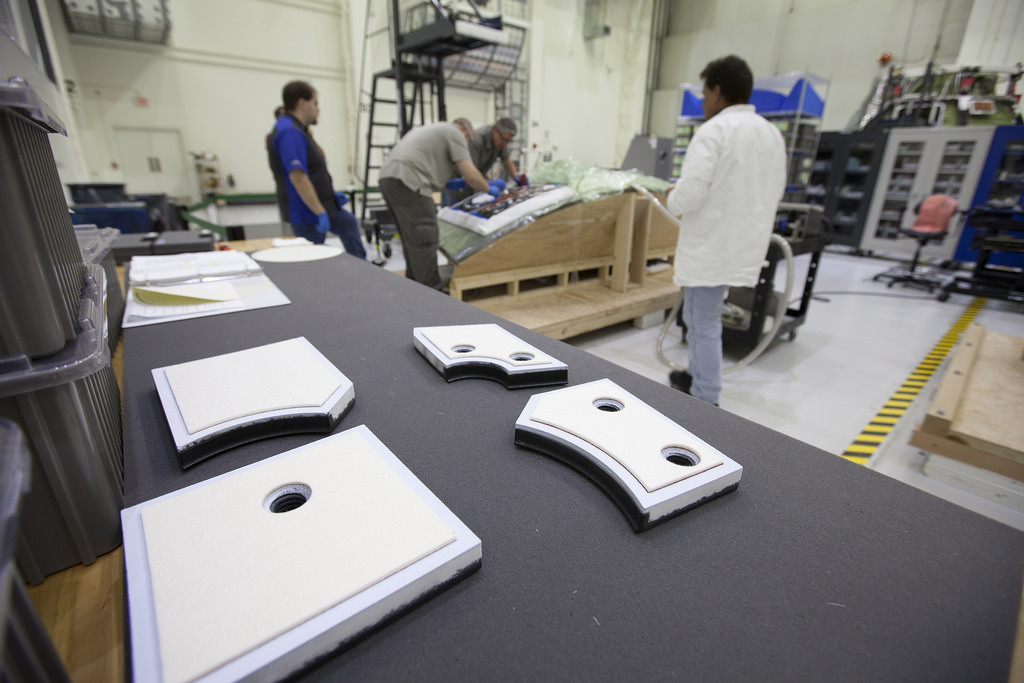 In the photo above, technicians prepare to bond thermal protection system tiles on the Orion crew module for the agency’s first uncrewed flight test with the Space Launch System (SLS) on NASA’s Journey to Mars. The work is taking place inside the Neil Armstrong Operations and Checkout Building at NASA’s Kennedy Space Center in Florida.

While similar to those used on the space shuttle, Orion only requires about 1,300 tiles compared to more than 24,000 on the shuttle. The tiles, along with the spacecraft’s heatshield, will protect Orion from the 5,000 degree Fahrenheit heat of re-entry.
Photo credit: NASA/Cory Huston 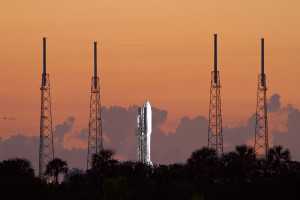 NASA’s Juno spacecraft is arriving at its destination with fanfare and fireworks.

In August 2007, a team led by NASA’s Launch Services Program based at Kennedy Space Center selected an Atlas V 551 rocket for the task of launching Juno. After four more years of mission integration and analysis, Juno was lofted into space with a nearly perfect ascent. At that point the Juno team at the Jet Propulsion Laboratory in Pasadena, Calif. took over control of the mission, deploying the spacecraft’s huge solar arrays and beginning a thorough checkout of all its systems and instruments to make sure all was well at the start of the long journey. 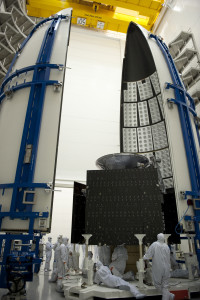 Now five years and some 1.75 billion miles later, Juno will enter into an orbit around Jupiter that gradually will get closer and closer to the planet during its mission lifetime. At about 9 p.m. Eastern Daylight Time on the Fourth of July, the spacecraft will fly within 2,900 miles of the cloud tops of Jupiter. It will conduct a 35-minute burn of its main engine, slowing by about 1,200 mph so it can enter the polar orbit of our solar system’s largest planet.

“I’m sure it will be a tense 35 minutes on July Fourth during the main engine firing necessary to slow Juno down enough to achieve orbit around Jupiter,” said John Calvert, Juno’s mission manager for the Launch Services Program (LSP) at Kennedy Space Center. “We are all excited to finally start revealing the mysteries of the origins and evolution of Jupiter.”

Juno’s goal is to understand the origin and evolution of Jupiter, look for a solid planetary core, map magnetic fields, measure water and ammonia in the deep atmosphere, and observe auroras.

For the latest status and information on Juno’s arrival at Jupiter, visit the mission’s website at https://www.nasa.gov/mission_pages/juno/main.