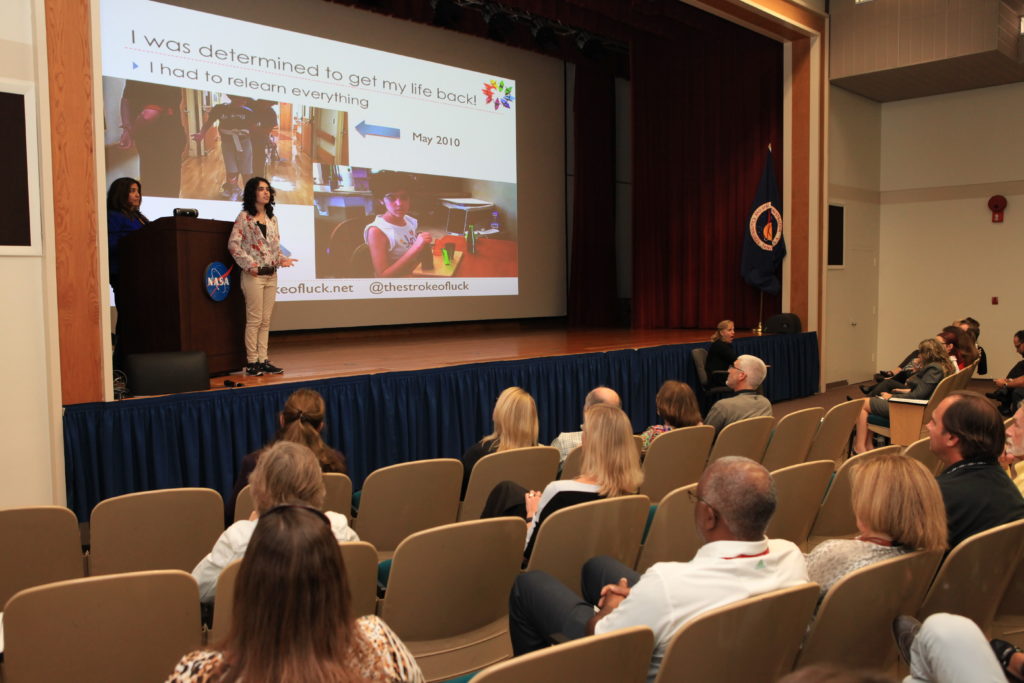 A woman who had to relearn everything about daily life following a nearly fatal stroke when she was 12 revealed to an audience at Kennedy some of the keys to her recovery and how she synthesized her own strengths with help from family and friends to graduate high school and then get into college.

As the keynote speaker for the event sponsored by Kennedy’s Disability Awareness and Action Working Group, or DAAWG, Alex and her mother, Juli Dixon, detailed Alex’s journey from age 4 – when she wanted to be a farmer so she could help animals – to pneumonia that struck her at age 10. The illness went away, but had set the stage for a stroke and coma that followed two years later. Since that occurrence, the pace of her learning slowed significantly and Alex had to re-learn everything from speech to how to work around paralysis in her right hand and other significant disabilities.

“I was determined that I would get better,” Alex Dixon said. “It’s slow, but you can do it. Failure isn’t just failure, there’s always something that improved. I just had to do it better next time.”

“We couldn’t give up,” Juli said of her family’s own determination to work with Alex. “We had to be satisfied with baby steps.”

After Alex Dixon graduated high school, her mother took to calling around to see what she could do to get Alex in to the University of Central Florida where Juli Dixon is a professor. “While I was busy calling around and finding out what I could do, Alex applied and got in completely on her own.”

Alex Dixon beamed at the memory and pointed to her college enrollment as the achievement she is most proud of. It’s also the environment that gave her considerable insight into the way people cope with disabilities, and what others do around them that helps them.