Processing activity at NASA’s Kennedy Space Center in Florida has ramped up in preparation for the agency’s launch of the Orion spacecraft atop the Space Launch System (SLS) rocket on its first deep space mission, Exploration Mission 1 (EM-1).

The Orion crew module adapter (CMA) for EM-1 was lifted for the first and only time, Nov. 11, during its processing flow inside the Neil Armstrong Operations and Checkout (O&C) Building high bay at the agency’s Kennedy Space Center in Florida. 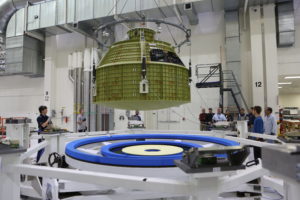 Technicians with Lockheed Martin, the Orion crew module manufacturer, lowered the adapter onto a test stand for secondary structure outfitting. The CMA will be moved into a temporary clean room at the end of the month for propellant and environmental control and life support system tube installation and welding.

The adapter will connect the Orion crew module to the European Space Agency-provided service module. The Orion spacecraft will launch on the SLS rocket on EM-1 scheduled for late 2018.

In the meantime, the Orion crew module structural test article (STA), pictured above right, arrived in its shipping container at Kennedy’s Shuttle Landing Facility aboard the agency’s Super Guppy aircraft Nov. 15 from the agency’s Stennis Space Center in Mississippi.  The test article was transported to Stennis from the Michoud Assembly Facility in New Orleans.

The container was offloaded and transported to the O&C on Nov. 16 where it was uncrated. Technicians removed the test module’s protective covering. Then it was lifted by crane and moved to a test tool called a birdcage where it was secured for further testing. The test article will undergo mechanical assembly for the next several months before being transported to Lockheed Martin in Denver for additional testing.