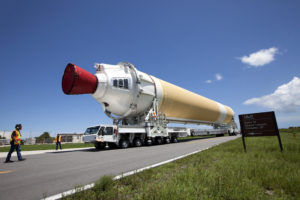 Two of the three common booster cores comprising the rocket’s first stage have arrived on the company’s Mariner ship, which delivered the components to Port Canaveral in Florida. From there the cores were offloaded and transported to the Horizontal Processing Facility at Cape Canaveral Air Force Station’s Space Launch Complex 37.