Teams of middle school-aged students from across the state of Florida gathered at NASA’s Kennedy Space Center on Friday, Aug. 11, to see their robot-programming skills put to the test aboard the International Space Station. The occasion: the finals of the Zero Robotics Middle School Summer Program national championship. 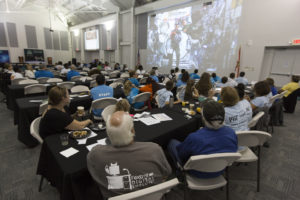 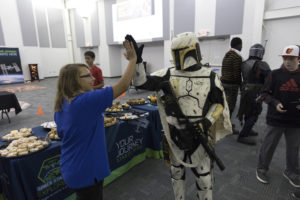 Adding to the fun were Sphero off-the-shelf programmable robots available for practice, a quantum levitation demonstration and a visit from Star Wars characters from the 501st Legion.

A total of 13 teams representing two countries and 12 states took part in the competition, with the winners hailing from West Virginia and Idaho.

Photos at right: Students and sponsors hear from astronauts aboard the International Space Station, shown on a big screen (top); a student high-fives a Star Wars character from the 501st Legion (bottom). Photo credits: NASA/Cory Huston