The spacecraft that revealed the remarkable planet Saturn to the world and sent back stunning images of its rings and nearby moons has completed its mission. NASA’s Cassini spacecraft made its final grand finale plunge into Saturn’s atmosphere Sept. 15, 2017.

The spacecraft and its attached Huygens probe launched aboard a Titan IVB/Centaur rocket on Oct. 15,1997, from Launch Complex 40 at Cape Canaveral Air Force Station in Florida, on its seven-year, 2.2-billion mile journey.

Cassini arrived in the Saturn system on June 30, 2004, and began a four-year mission to study the giant planet, its rings, moons and magnetosphere. The spacecraft made 22 weekly dives between the planet and its rings. It continued to beam back to Earth hundreds of gigabytes of scientific data. The Huygens probe made the first landing on a moon (Titan) in the outer solar system.

The Cassini-Huygens mission was a cooperative project of NASA, the European Space Agency and the Italian Space Agency. NASA’s Jet Propulsion Laboratory in Pasadena, California, managed the mission for the agency’s Science Mission Directorate. JPL designed, developed and assembled the Cassini orbiter.

Additional information for employees is available at http://kscsos.com.

The center’s damage assessment and recovery team has completed a 90 percent review of the center and continues to recover key systems throughout Kennedy.

The center currently is without potable water service, which is used for drinking, food preparation and cleaning.

The center and surrounding community remain under a boil water restriction.

The center’s chillers rely on industrial water and are unaffected by the water restriction.  The center will re-open following restoration of full water service.

Kennedy Space Center will remain closed on Thursday, Sept. 14, as the center’s damage assessment and recovery team continues to survey the impacts of Hurricane Irma.

Facilities at NASA’s Kennedy Space Center in Florida sustained a variety of damage as powerful Hurricane Irma churned past the spaceport Sunday, Sept. 10.

Center Director Bob Cabana joined the center’s Damage Assessment and Recovery Team for a survey of the spaceport Tuesday. A damage assessment report will be compiled over the next several weeks after a full inspection of the center has been conducted.

The center currently is without water service.

Visit http://images.nasa.gov for photos taken during the damage assessment and recovery process.

An initial hurricane damage assessment is taking place at NASA’s Kennedy Space Center in Florida. The center will remain closed through Tuesday, Sept. 12, to all but essential personnel.

9:45 p.m. EDT–During today’s 6 o’clock hour, Irma packed sustained winds of 35 miles per hour, with gusts as high as 64 m.p.h. The storm’s eye is forecast to come within 116 miles of KSC, its closest proximity to the center, at 2 a.m. Monday, producing maximum sustained winds of 60 m.p.h. for approximately 3 hours. Gusts as high as 74 m.p.h. are possible. Rainfall of 8 – 12” rain is expected, with 15 to 18” possible in isolated areas. A 1- to 3-foot storm surge remains forecast. Irma is expected to exit our immediate area by mid-day Monday, Sept. 11.

Final decisions from the Damage Assessment and Recovery Team, and the center’s return to work, are expected to be made during a 9 a.m. briefing Monday, Sept. 11.

NASA’s Kennedy Space Center in Florida is closing Friday, Sept. 8 through at least Monday, Sept. 11, due to the approach of Hurricane Irma. The storm currently is expected to make its closest approach to the Kennedy/Cape Canaveral Air Force Station area during the weekend. Currently a Category 5 hurricane, Irma could potentially bring heavy rain and strong winds to the spaceport. 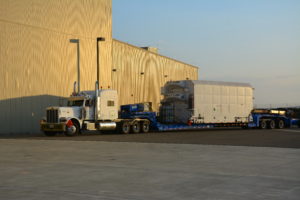 After its arrival, the JPSS-1 spacecraft was pulled from its shipping container, and is being prepared for encapsulation on top of the United Launch Alliance Delta II rocket that will take it to its polar orbit at an altitude of 512 miles (824 km) above Earth. JPSS-1 is scheduled for launch from Vandenberg’s Space Launch Complex-2 on Nov. 10 at 1:47 a.m. PST.