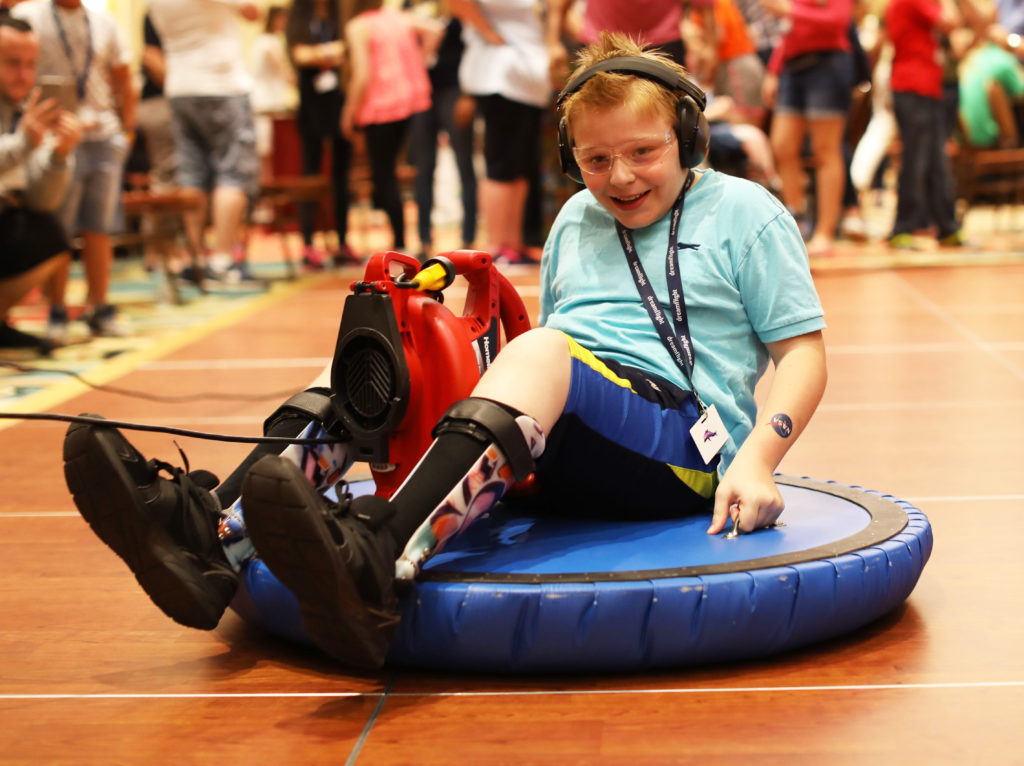 A group of seriously ill or disabled children and their caregivers from the United Kingdom recently had an opportunity for a special vacation in Orlando, Florida. For the past 30 years, UK-based Dreamflight has chartered a 747 jumbo jet for 192 children facing a disability. The children spent 10 days in exciting events, including an evening of space-themed activities with NASA.

While in Central Florida, the children, ages 8 to 14, spent time at Orlando’s theme and water parks. For the past five years, NASA has been part of the experience for these youngsters with an interactive NASA Night created by volunteers from NASA’s Kennedy Space Center.

Dreamflight was co-founded in 1986 by Patricia Pearce and Derek Pereira, both of whom worked for British Airways. They began raising funds to take deserving children to Orlando theme parks and Dreamflight was born. The program’s goal is to change the kids’ young lives. But to the Kennedy employees who spent a few hours with these special children, Dreamflight and the children made a lasting impact.

Peter Karikas is 14 years old and is a member of the Stargazing Club at his school in Scotland. He stated that NASA Night was his favorite activity of the entire trip.

“I would love to work for NASA – that’s my dream job,” he said. “I’m quite interested in this as I aspire to do something like that,”

While there were many fun activities, the young people were thrilled to hear from someone who had flown aboard the space shuttle. Florida Tech professor of physics and space sciences, Dr. Sam Durrance, gave a presentation called “Astronaut Talk.” He was a payload specialist on STS-35 in 1990 and STS-67 in 1995.

Karikas said he enjoyed meeting and talking to Durrance.

“I loved hearing his stories and seeing the pictures from space,” he said. “There is so much out there to do and learn about. It’s all fascinating to me.”

After hearing about what it’s like to fly in space, the young people participated in a virtual reality demonstration, gee-whiz science presentation, rode a hovercraft and had their picture taken with the “SpacePerson” from the Kennedy visitor complex.

Dreamflight team leader Jason Beamish-Knight has been volunteering with the organization for 15 years.

“I enjoy the satisfaction of working with the kids,” he said. “It’s all about helping them have the holiday of a lifetime.”