Next Commercial Resupply Services Mission: SpaceX CRS-14
Launch Time and Date: 4:30 p.m., Monday, April 2, 2018
Lift Off: Space Launch Complex 40 at Cape Canaveral Air Force Station in Florida
Launch Vehicle: SpaceX Falcon 9, 230 feet-tall
Spacecraft: Dragon, 20 feet high, 12 feet-in diameter
Payload: Dragon will deliver cargo and material to support science investigations aboard the International Space Station.
Return to Earth: After about one month attached to the space station, Dragon will return with results of earlier experiments, splashing down in the Pacific Ocean off the coast of Baja California.
Payloads on Board: https://go.nasa.gov/2Isu6rt

Nearly the last of several large connection lines, called umbilicals, was installed on the mobile launcher at NASA’s Kennedy Space Center in Florida. The umbilical was lifted by crane and attached high on the tower of the mobile launcher at about the 240-foot level, bringing the steel structure one step closer to supporting processing and launch of NASA’s Orion spacecraft and Space Launch System (SLS) rocket. The launcher is designed to support the assembly, testing, check out and servicing of the rocket, as well as transfer it to the pad and provide the platform from which it will launch.

This particular umbilical will supply propellants, environmental control systems, pneumatics and electrical connections to the interim cryogenic propulsion stage (ICPS) of the SLS rocket and will swing away before launch. The umbilical also will provide hazardous gas leak detection while the rocket is on the pad. The ICPS is located between the core stage of the rocket and the Orion capsule, and will provide propulsion for Orion while in space and give the spacecraft the big push needed to fly beyond the moon.

To install the umbilical, construction workers with JP Donovan prepared the rigging lines and attached the umbilical to a large crane. The ICPS umbilical was slowly lifted up and bolted to the mobile launcher. The entire process took about four hours.

With the umbilical in place, workers will install additional equipment on the tower, as well as electrical wiring, environmental control system tubing, hydraulics and other commodities will be routed to the umbilical arm before testing. Tests of the swing arm also will be performed as part of the verification and validation process.

Exploration Ground Systems is overseeing installation of the launch umbilicals and launch accessories on the mobile launcher to prepare for the first integrated test flight of Orion atop the SLS on Exploration Mission-1. A pair of tail service mast umbilicals are slated for installation later this year and will be the last of the twenty umbilicals and launch accessories to be installed on the mobile launcher. With this test flight, NASA is preparing for missions to send astronauts to deep space destinations, including the Moon, Mars and beyond.

Led by Kennedy Space Center Director Bob Cabana, spaceport employees took part in an annual tradition Tuesday, March 13: the KSC Walk Run. It’s NASA’s version of the community fun run, but the race course – the Shuttle Landing Facility – is one of a kind.

Runners may choose between 10K, 5K and 2-mile options and take off down the runway alongside their colleagues in the spirit of friendly competition.

Open only to badged spaceport employees and their guests, the KSC Walk Run is a part of Safety and Health Days, a week-long event dedicated to fostering a culture of safety and wellness both at work and at home. A safe workplace and healthy workforce are key ingredients to successful missions.

The first growth test of crops in the Advanced Plant Habitat aboard the International Space Station yielded great results this week. Arabidopsis seeds – small flowering plants related to cabbage and mustard – grew for about six weeks, and the dwarf wheat for five weeks.

This growth test was a precursor to the start of an investigation known as PH-01, which will grow five different types of Arabidopsis and is scheduled to launch in May on Orbital ATK’s ninth commercial resupply mission to the space station.

The plant habitat is now ready to support large plant testing on the space station. A fully enclosed, closed-loop system with an environmentally controlled growth chamber, it uses red, blue and green LED lights, as well as broad-spectrum white LED lights. The system’s more than 180 sensors will relay real-time information, including temperature, oxygen content and moisture levels back to the team on the ground at NASA Kennedy.

A memorial quilt commemorating Columbia and the seven crew members of STS-107 has been officially turned over for display in the Columbia Preservation Room inside the Vehicle Assembly Building at NASA’s Kennedy Space Center in Florida.

The quilt was received by Mike Ciannilli, the Apollo, Challenger, Columbia Lessons Learned Program (ACCLLP) manager. Janet Phillips, property custodian in Kennedy’s Office of Procurement, presented the quilt, along with a certificate, during the turnover ceremony. Both will be preserved and added to NASA’s collection of more than 80,000 artifacts in the Columbia Preservation Room.

“Art often can be used to powerfully convey emotion,” Ciannilli said. “This quilt, this work of art, does just that. It shares the pain, support and comfort of the American people for our nation’s loss of Columbia and her heroic crew.”

The 10-by16-foot quilt was designed by Katherine Walsh, originally from Kentucky, now residing in Dover, New Jersey. Walsh is a lifelong fan of NASA and the space program. After space shuttle Columbia and the crew were lost, she had an idea to create the quilt. Beginning in early February 2003, she sent out requests to the quilting community to create and send her quilt squares. By May, she had received fabric donations from adults and children in 13 states.

Walsh worked on the quilt for seven months. During a family vacation to Florida, she handed over the finished quilt at the Kennedy Space Center Visitor Complex on Oct. 8, 2003. The quilt made its way to the center. Phillips recently located it and worked to get it transferred from the Office of Procurement to the Columbia Preservation Room.

“I am thrilled to know that all of my research and perseverance paid off with the culmination of the Columbia Preservation Room transfer ceremony,” Phillips said. “We’ve preserved history, not just for Kennedy, but for the entire agency and the nation.”

Called the Aircraft Mishap Preparedness and Contingency Plan, the operation was designed to validate several updated techniques the center’s first responders would follow should they need to rescue a crew in case of a real accident.

Personnel from NASA’s fire, security and emergency management were joined by team members from center Safety and Mission Assurance departments and Space Florida, the state agency that operates the Shuttle Landing Facility for NASA, to participate in the simulation and communication tests.

The drill began with a distress call from the helicopter “crash site,” near the northwest end of the Shuttle Landing Facility runway to the facility’s control tower. The pilot, still inside the aircraft, was injured and his colleague unconscious.

The exercise was performed to gauge reaction times and identify and correct possible deficiencies in coordination and communications.

The operation concluded with the successful recovery of both pilots from the crash simulation area. The helicopter was left at the site to allow additional training for mishap investigators. 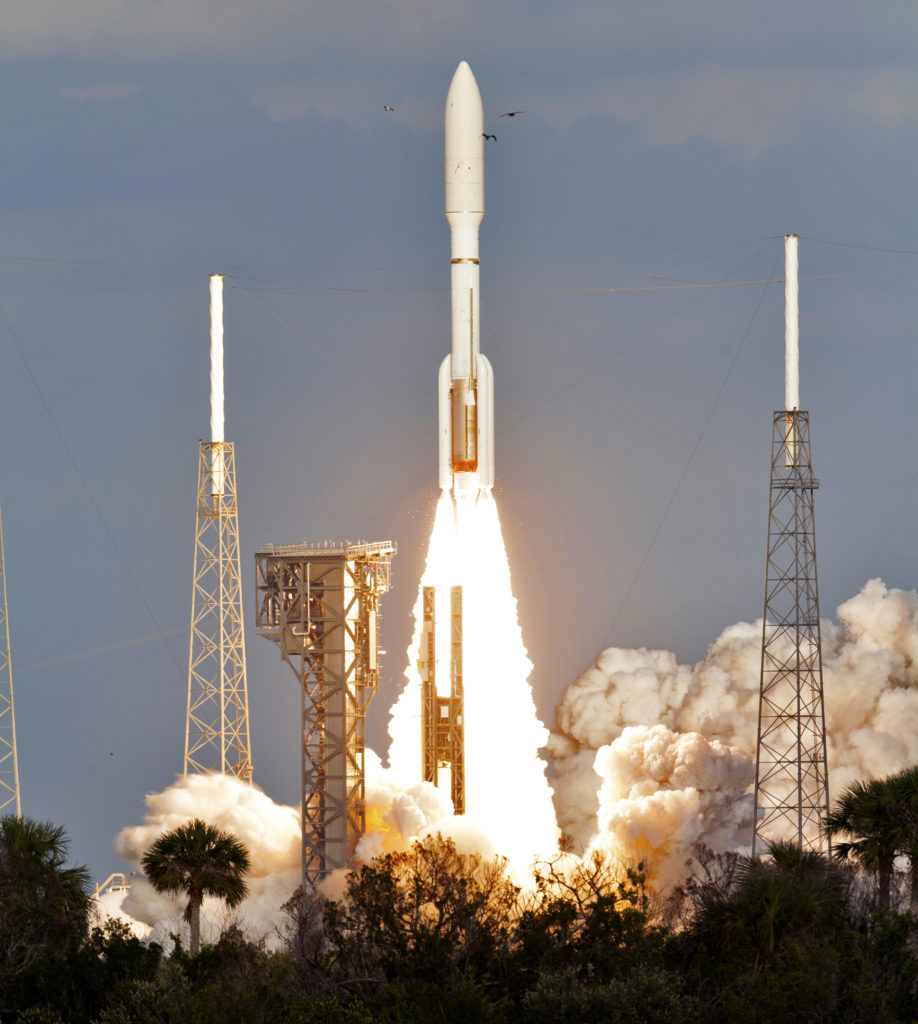 A United Launch Alliance Atlas V rocket lifts off from Space Launch Complex 41 at Cape Canaveral Air Force Station carrying the NOAA Geostationary Operational Environmental Satellite, or GOES-S. Liftoff was at 5:02 p.m. EST. GOES-S is the second satellite in a series of next-generation weather satellites. It will launch to a geostationary position over the U.S. to provide images of storms and help predict weather forecasts, severe weather outlooks, watches, warnings, lightning conditions and longer-term forecasting. For more information as the mission continues, go to: www.nasa.gov/goes
Photo credit: NASA/Bill White

In celebration of Introduce a Girl to Engineering Day, thousands of students from throughout the nation participated in a virtual gathering that featured several female NASA scientists and technical experts.

The event was anchored at Kennedy Space Center in Florida, but hosted in “classrooms” on the agency’s Digital Expansion to Engage the Public (DEEP) network, allowing students to speak with and ask questions of women working on the leading edge of science and technology. Among the NASA experts making presentations were Janet Petro, Kennedy’s deputy director; Dr. Gioia Massa, life science project scientist for the Vegetable Production System (Veggie); and Janet Gobaira, Kennedy flight systems engineer, who also engaged with Spanish-speaking students.

“NASA recognizes the need to empower women and to utilize the full range of talented students across our country that will someday enter the workforce,” Petro said.

“Women are already making huge contributions to STEM fields. Through this event, we are hoping to introduce students to just a few of the women at NASA who are making contributions and provide a behind the scenes glimpse of what it is like to be a woman working in STEM field.”

Held Feb. 22, Introduce a Girl to Engineering Day was a part of National Engineers Week (Feb. 18-24) and coincided with the worldwide celebration of Girl Day.