NASA’s next Mars lander is one significant step closer to beginning its journey. Secured inside its payload fairing, the agency’s Interior Exploration using Seismic Investigations, Geodesy and Heat Transport (InSight) spacecraft was transported from the Astrotech facility to Space Launch Complex 3 at Vandenberg Air Force Base in California.

The payload fairing was hoisted up inside the Vertical Integration Facility and attached to the United Launch Alliance Atlas V rocket. Liftoff is scheduled for May 5, 2018.

InSight will be the first mission to look deep beneath the Martian surface. It will study the planet’s interior by measuring its heat output and listening for marsquakes. InSight will use the seismic waves generated by marsquakes to develop a map of the Red Planet’s deep interior. The resulting insight into Mars’ formation will provide a better understanding of how other rocky planets, including Earth, were created.

NASA’s Jet Propulsion Laboratory in Pasadena, California, manages the InSight mission for the agency’s Science Mission Directorate. InSight is part of NASA’s Discovery Program, managed by its Marshall Space Flight Center in Huntsville, Alabama. The spacecraft, including cruise stage and lander, was built and tested by Lockheed Martin Space in Denver. Several European partners, including France’s space agency, the Centre National d’Étude Spatiales, and the German Aerospace Center, are supporting the mission. United Launch Alliance of Centennial, Colorado, is providing the Atlas V launch service. NASA’s Launch Services Program, based at its Kennedy Space Center in Florida, is responsible for launch management.

The two-day event was held at two spaceport locations – one day at the Kennedy Space Center Visitor Complex, the next at the center’s Space Station Processing Facility – offering up plenty of opportunities for guests and employees alike to learn more about new, Earth-friendly technologies we can use to improve our own lives at work and at home.

“Our Earth Day celebration is one of several means to educate and encourage the workforce to make environmentally sound decisions,” said Dan Clark, NASA Kennedy’s Sustainability Team lead. “Doing so reduces mission risk, saves money, and makes for a healthier place to live and work. For these reasons, both the White House and NASA HQ are supportive of center participation in outreach activities like this.”

The event featured an expo highlighted by 50 exhibitors who were ready to share their expertise on a wide range of topics, including electric vehicles, sustainable lighting, renewable energy, Florida-friendly landscaping tips, Florida’s biking trails and more.

Kennedy’s sustainability programs and initiatives improve green practices that have an environmental impact or benefit on center. These sustainability efforts help preserve, enhance and strengthen Kennedy’s ability to carry out its missions.

NASA will have a new tool in the search for habitable planets.

The agency’s Transiting Exoplanet Survey Satellite was delivered to space this evening aboard a SpaceX Falcon 9 rocket that lifted off from Space Launch Complex 40 at Cape Canaveral Air Force Station in Florida. Launch occurred right on time at 6:51 p.m. EDT following an uneventful countdown highlighted by excellent weather and healthy hardware.

“Liftoff of the SpaceX Falcon 9 rocket carrying TESS, a planet-hunting spacecraft that will search for new worlds beyond our solar system,” NASA Launch Commentator Josh Finch said as the rocket thundered away from the launch complex.

TESS will be the first space-based, all-sky surveyor to search for exoplanets – planets outside of our own solar system. However, the spacecraft isn’t looking for just any planets. It’s specifically searching for those that are Earth-like, and close enough to our own celestial neighborhood that scientists can study them further.

“We are thrilled TESS is on its way to help us discover worlds we have yet to imagine, worlds that could possibly be habitable, or harbor life,” said Thomas Zurbuchen, associate administrator of NASA’s Science Mission Directorate in Washington.

How will it find these planets? Like the Kepler mission before it, TESS will use the transit method – that is, it will stare intently at the stars in a given section of the sky, watching for the telltale flicker of a passing (transiting) planet. (Learn more about TESS and the transit method on the TESS Overview.) Kepler, which launched in 2009, focused on one portion of the sky and sought to find Earth-like planets. TESS, on the other hand, will look for stars 30 to 100 times brighter than those observed by Kepler. It also will scan a far larger area.

But first, TESS had to get off the ground. After liftoff, the Falcon 9 rocket performed well, sending the spacecraft on its way to orbit. At 7:53 p.m., the twin solar arrays that will power the spacecraft successfully deployed.

“Wow, are we excited. We just had a perfect countdown and perfect launch of the TESS mission,” said Tim Dunn of NASA’s Launch Services Program. “The Falcon 9 continues to demonstrate what a reliable vehicle it has become,” Dunn said.

Over the course of several weeks, TESS will use six thruster burns to travel in a series of progressively elongated orbits to reach the Moon, which will provide a gravitational assist so that TESS can transfer into its 13.7-day final science orbit around Earth. After approximately 60 days of check-out and instrument testing, the spacecraft will begin its work.

NASA and SpaceX are targeting the launch of NASA’s Transiting Exoplanet Survey Satellite, or TESS, on a Falcon 9 rocket from Space Launch Complex 40 at Cape Canaveral Air Force Station for no earlier than 6:51 p.m. EDT.

Frequent updates from the countdown will begin at 6:30 p.m. on the TESS blog. You can also watch at http://www.nasa.gov/live.

TESS is the next step in the search for planets outside of our solar system. The mission will find exoplanets that periodically block part of the light from their host stars, events called transits. TESS will survey the nearest and brightest stars for two years to search for transiting exoplanets.

Launch teams are standing down today to conduct additional Guidance Navigation and Control analysis, and teams are now working towards a targeted launch of the Transiting Exoplanet Survey Satellite (TESS) on Wednesday, April 18. The TESS spacecraft is in excellent health, and remains ready for launch. TESS will launch on a Falcon 9 rocket from Space Launch Complex 40 at Cape Canaveral Air Force Station in Florida.

In just a few hours, a NASA spacecraft is expected to launch on a mission to search the skies for the nearest terrestrial planets outside our solar system. The Transiting Exoplanet Survey Satellite, or TESS, is scheduled to lift off aboard a SpaceX Falcon 9 rocket at 6:32 p.m. EDT from Space Launch Complex 40 at Florida’s Cape Canaveral Air Force Station.

Follow NASA’s TESS Blog beginning at 6 p.m. for frequent updates from the countdown.

Today, NASA’s Kennedy Space Center is hosting several events to be broadcast live on NASA TV. View the TESS Briefings and Events page for the full list of event participants. 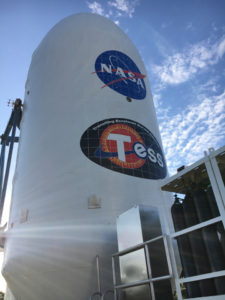 NASA’s Transiting Exoplanet Survey Satellite, or TESS, is making strides toward its upcoming liftoff. The planet-hunting spacecraft is slated to launch from Cape Canaveral Air Force Station’s Space Launch Complex 40 on Monday, April 16, aboard a SpaceX Falcon 9 rocket.  Inside Kennedy Space Center’s Payload Hazardous Servicing Facility, the TESS spacecraft was sealed within the Falcon 9 payload fairing in preparation for its move to the launch pad.

The satellite is the next step in NASA’s search for planets outside our solar system, known as exoplanets.

TESS is a NASA Astrophysics Explorer mission led and operated by MIT in Cambridge, Massachusetts, and managed by NASA’s Goddard Space Flight Center in Greenbelt, Maryland. Dr. George Ricker of MIT’s Kavli Institute for Astrophysics and Space Research serves as principal investigator for the mission. Additional partners include Orbital ATK, NASA’s Ames Research Center, the Harvard-Smithsonian Center for Astrophysics and the Space Telescope Science Institute. More than a dozen universities, research institutes and observatories worldwide are participants in the mission. NASA’s Launch Services Program is responsible for launch management.