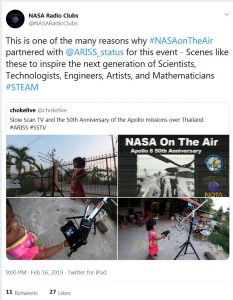 Richard G. Smith, a former director of NASA’s Kennedy Space Center in Florida, passed away March 14, 2019, in Decatur, Alabama. He was 89 years old.

Smith served as director of Kennedy from Sept. 26, 1979 to Aug. 2, 1986. During his years as director, the buildup of the space shuttle was completed, 25 space shuttle missions were launched and planning efforts began for the International Space Station.

At the beginning of his career, Smith became a member of the rocket research and development team at Redstone Arsenal in Alabama in 1951. He transferred to NASA in July 1960 when the Development Operations Division of the Army Ballistic Missile Agency became the nucleus for the establishment of the George C. Marshall Space Flight Center in Huntsville.

Smith served in various positions at Marshall, including in the former Guidance and Control Laboratory and in the Systems Engineering Office prior to being appointed deputy manager and later manager of the Saturn Program. In 1974, Smith was named deputy director of the Marshall Center.

In August 1978, Smith accepted a one-year assignment as deputy associate administrator for Space Transportation Systems at NASA Headquarters in Washington. He served as director of the Skylab Task Force, appointed by the NASA administrator to represent NASA preceding and following the re-entry of Skylab.

He is survived by his wife of close to 66 years, Louise Self Smith, two daughters, two grandchildren and four great-grandchildren.

The SpaceX Crew Dragon spacecraft splashed down at 8:45 a.m. EST about 200 miles off Florida’s east coast, returning from the uncrewed Demo-1 flight test to the International Space Station and the company’s inaugural flight with NASA’s Commercial Crew Program.

Crew Dragon will remain docked to the International Space Station until approximately 2:30 a.m. on Friday, March 8. The spacecraft is expected to return to Earth hours later, with a splashdown in the Atlantic Ocean at approximately 8:45 a.m.

The Demo-1 uncrewed flight test to the International Space Station, SpaceX’s inaugural flight with NASA’s Commercial Crew Program, is underway following the successful launch Saturday morning of the company’s Falcon 9 rocket and Crew Dragon spacecraft. The first-of-its-kind mission, planned to be a full demonstration of the spacecraft and its systems, launched on time at 2:49 a.m. EST from Launch Complex 39A at the agency’s Kennedy Space Center in

In addition to 400 pounds of supplies and equipment, Crew Dragon is carrying Ripley, an anthropomorphic test device outfitted with sensors to gather important data about what an astronaut flying aboard the spacecraft would experience throughout the mission.

Crew Dragon will carry out a series of phasing maneuvers as it pursues the space station during approach. The spacecraft is scheduled to autonomously dock with the orbiting laboratory tomorrow morning, March 3, at about 6 a.m. EST, and remain docked until approximately 2:30 a.m. on Friday, March 8. Crew Dragon is expected to return to Earth with a splashdown in the Atlantic Ocean at approximately 8:45 a.m., a little more than six hours after departing the space station.