Even the toughest vehicles need regular maintenance to function at their best. Recently, William Vardaman and Pat Brown, both working under the Jacobs contracting team, performed engine maintenance on NASA’s crawler-transporter 2 in the crawler yard located in the agency’s Kennedy Space Center’s Launch Complex 39 area in Florida. 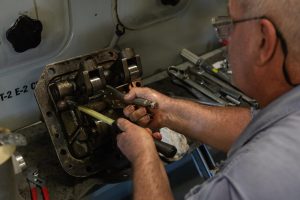 This is one of two crawler-transporters that carried rockets and spacecraft, including the Apollo/Saturn V and space shuttle, from the Vehicle Assembly Building (VAB) to the launch pad. Now, they’re getting ready for NASA’s accelerated return to the Moon.

Crawler-transporter 2 has been modified and upgraded to carry the mobile launcher and NASA’s Space Launch System rocket, topped by the Orion spacecraft, for Exploration Mission-1, which will launch in 2020. The agency’s Exploration Ground Systems oversaw extensive upgrades to crawler-transporter 2, including new generators, gear assemblies, roller bearings and brakes, as well as the hydraulic jacking, equalization and leveling (JEL) cylinders that keep its carrying surface level.

Learn more about the crawlers at https://www.nasa.gov/content/the-crawlers