Due to arrive at the International Space Station on July 27, the Dragon spacecraft contains multiple supplies, equipment and material critical for supporting science and research investigations at the space station.

Emergency Location Markers (ELMs) have been installed on Kennedy Space Center federal property at Playalinda Beach, the Merritt Island National Wildlife Refuge and at both KARS Parks to provide the emergency phone number and geolocation information to Kennedy visitors or employees.

The ELMs are national standardized signs that display U.S. National Grid (USNG) coordinates and were installed as a result of an Innovation without Boundaries award by the Chief Technology Office in 2018. Fifty-nine ELMs and 25 information signs that explain the system were installed in areas where members of the public may have difficulty describing their location in an emergency.

Additionally, free web applications FindMeSAR.com and USNGAPP.org allow any user to determine their location anywhere via USNG, known as the “language of location.” These apps may be used routinely to geolocate infrastructure, such as hydrants or culverts, as another example.

The launch of SpaceX’s 18th Commercial Resupply Services mission to the International Space Station – scheduled for this evening – has scrubbed due to unfavorable weather conditions.

Launch is now scheduled for Thursday, July 25, at 6:01 p.m. EDT. Launch coverage will begin at 5:45 p.m. on NASA TV and the agency’s website. A launch on Thursday would result in the Dragon spacecraft arriving to the space station Saturday, July 27.

The launch of SpaceX’s 18th commercial resupply services mission to the International Space Station for NASA is scheduled for 6:24 p.m. EDT with an instantaneous launch window. The SpaceX Falcon 9 rocket and Dragon spacecraft have been moved to the vertical launch position. Launch coverage will begin at 6 p.m. on NASA Television and the agency’s launch blog.

Packed with more than 5,000 pounds of research, crew supplies and hardware, the Dragon spacecraft will launch on a Falcon 9 rocket from Space Launch Complex 40 at Cape Canaveral Air Force Station in Florida.

Pence, who chairs the National Space Council, is visiting the Florida spaceport on the 50th anniversary of the Apollo 11 mission, which landed the first two humans on the Moon.

Accompanied by NASA Administrator Jim Bridenstine, Pence visited Launch Complex 39A, the site of the historic Apollo 11 launch on July 16, 1969, before giving a speech at the Florida spaceport’s Neil Armstrong Operations and Checkout Building.

NASA and SpaceX now are targeting 6:24 p.m. EDT on Wednesday, July 24, for the company’s 18th cargo resupply mission to the International Space Station. The Dragon spacecraft will launch from Space Launch Complex 40 at Cape Canaveral Air Force Station in Florida, and arrive at the space station on Friday, July 26, filled with about 5,500 pounds of science, cargo and crew supplies for the microgravity laboratory.

The vice president and second lady Karen Pence will arrive in Air Force Two at Kennedy’s Shuttle Landing Facility. The next stop is Launch Complex 39A, the site of the historic Apollo 11 launch on July 16, 1969.

Pence, who chairs the National Space Council, will address invited guests, elected officials and NASA, Lockheed Martin and other industry leaders at Kennedy’s Neil Armstrong Operations and Checkout Building (O&C). The vice president will recognize NASA’s history in honoring the Apollo 11 heroes, while examining NASA’s future plans, including the Artemis missions that are part of the agency’s Moon to Mars human space exploration efforts.

Tune in to NASA TV or the agency’s website at 1:05 p.m. to view Pence’s speech live from the O&C.

Kennedy Space Center continues its celebration of Apollo 11’s 50th anniversary with “NASA’s Giant Leaps: Past and Future” – a show honoring the heroes of Apollo and highlighting the agency’s future space exploration plans. Watch live on NASA TV or the agency’s website Friday, July 19, from 1 to 3 p.m.

Hosted from Kennedy’s Apollo/Saturn V Center in Florida, the show will include segments at Washington D.C.; Johnson Space Center in Houston, Texas; the U.S. Space and Rocket Center near the agency’s Marshall Space Flight Center in Huntsville, Alabama; Neil Armstrong’s hometown of Wapakoneta, Ohio; and the Museum of Flight in Seattle, Washington.

Immediately following “NASA’s Giant Leaps: Past and Future,” stay tuned for “STEM Forward to the Moon,” also streaming on NASA TV and the agency’s website. The show, airing from 3 to 3:30 p.m., will feature kids participating in Moon landing simulations and segments of activity demonstrations at the following museums across the nation: 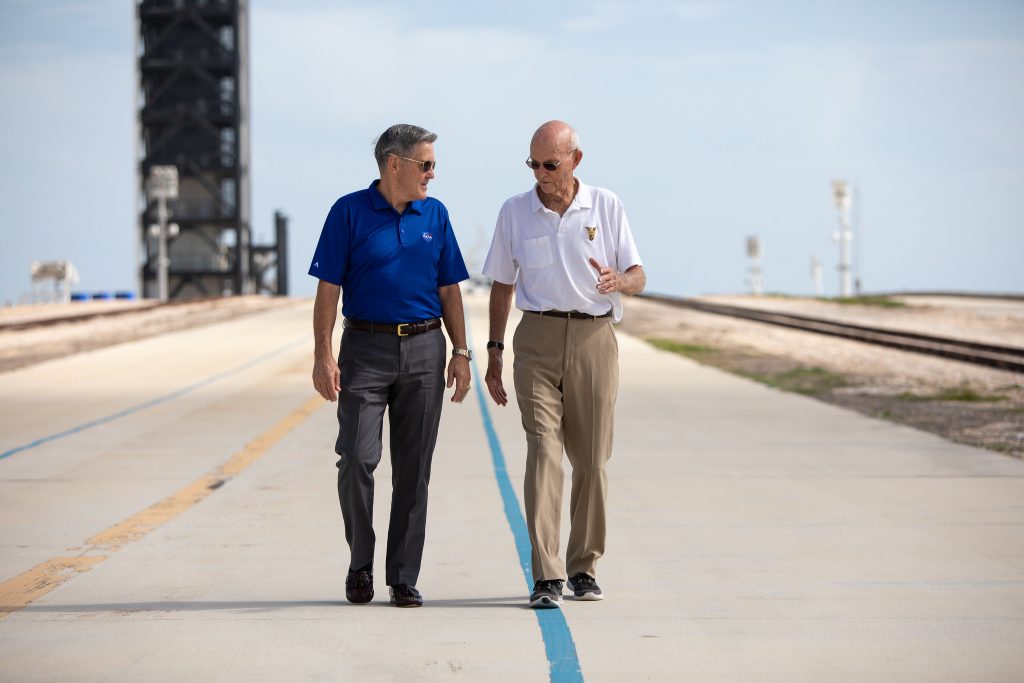 Fifty years ago this week, the world watched and celebrated as the crew of Apollo 11 made history. Commander Neil Armstrong and Lunar Module Pilot Buzz Aldrin became the first two people to set foot on the Moon as Command Module Pilot Michael Collins orbited above the lunar surface.

On July 16, 2019, the 50th anniversary of the Apollo 11 launch, astronaut Michael Collins, right, visited Kennedy Space Center and toured Launch Complex 39A, the site of the launch, with Kennedy Center Director Bob Cabana. During his visit to the Florida spaceport, Collins discussed the moments leading up to launch at 9:32 a.m. on July 16, 1969, and what it was like to be part of the first crew to land on the Moon.