The United Launch Alliance (ULA) Atlas V booster that will launch the Solar Orbiter on its upcoming mission to study the Sun has arrived at the Florida spaceport, while the spacecraft is beginning launch preparations of its own.

The company’s cargo vessel, Rocketship – formerly known as Mariner – delivered the Atlas V first stage and Centaur upper stage to Port Canaveral on Nov. 20, 2019, after traveling from the booster’s manufacturing facility at Decatur, Alabama. Upon arrival at the port, the launch hardware was trucked to separate facilities at nearby Cape Canaveral Air Force Station: the booster to ULA’s Atlas Spaceflight Operations Center (ASOC) and the Centaur to a separate facility. Both stages will undergo preflight checkouts before the components are stacked for launch at the Space Launch Complex 41 Vertical Integration Facility closer to liftoff.

Meanwhile, the Solar Orbiter spacecraft has been removed from its shipping container for the start of its own prelaunch preparations at the Astrotech Space Operations Facility in Titusville, Florida. The spacecraft was uncrated Nov. 15 and rotated to vertical on Nov. 18, paving the way for upcoming processing and checkouts, including tests of the spacecraft and its suite of science instruments, as well as its propellant pressurization system.

Solar Orbiter is a European Space Agency mission with strong NASA participation. The mission aims to study the Sun, its outer atmosphere and solar winds. The spacecraft will provide the first images of the Sun’s poles. NASA’s Launch Services Program based at Kennedy is managing the launch. Liftoff is scheduled for Feb. 5, 2020, from Cape Canaveral Air Force Station’s Space Launch Complex 41 aboard the ULA Atlas V launch vehicle.

The Boeing CST-100 Starliner spacecraft that will launch to the International Space Station on the company’s uncrewed Orbital Flight Test for NASA’s Commercial Crew Program (CCP) has taken a significant step toward launch. Starliner rolled out of Boeing’s Commercial Crew and Cargo Processing Facility at NASA’s Kennedy Space Center in Florida on Nov. 21, making the trek on a transport vehicle to Space Launch Complex 41 at Cape Canaveral Air Force Station.

At the pad, Starliner was hoisted up at the Vertical Integration Facility and secured atop a United Launch Alliance Atlas V rocket for the flight test to the space station.

The Atlas V rocket that will carry Starliner comprises a booster stage and dual-engine Centaur upper stage, as well as a pair of solid rocket boosters.

The uncrewed flight test, targeted to launch Dec. 17, will provide valuable data on the end-to-end performance of the Atlas V rocket, Starliner spacecraft and ground systems, as well as in-orbit, docking and landing operations.

The data will be used as part of NASA’s process of certifying Boeing’s crew transportation system for carrying astronauts to and from the space station.

NASA is working in partnership with Boeing and SpaceX to launch astronauts on American rockets and spacecraft from American soil for the first time since 2011. Safe, reliable and cost-effective human transportation to and from the space station will allow for additional research time and increase the opportunity for discovery aboard humanity’s testbed for exploration. 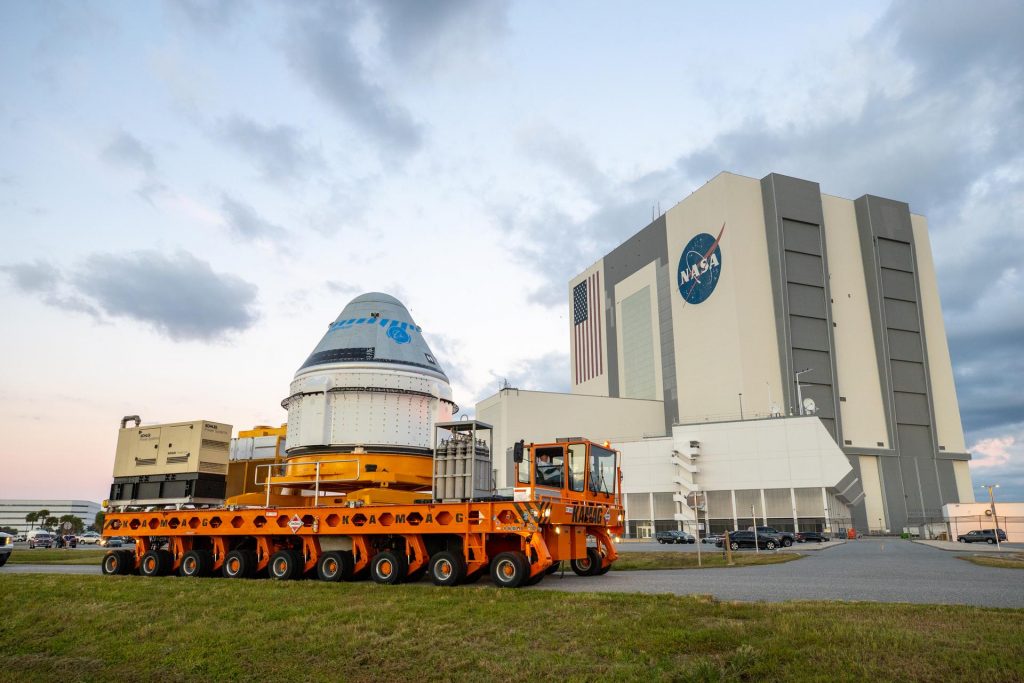 NASA and Boeing are preparing for the next step in NASA’s Commercial Crew Program on Thursday, Nov. 21, as the CST-100 Starliner spacecraft begins its transport for integration on a United Launch Alliance (ULA) Atlas V rocket ahead of Boeing’s uncrewed Orbital Flight Test to the International Space Station.

During the operation, the fueled Starliner will be moved from Boeing’s Commercial Crew and Cargo Processing Facility at Kennedy to ULA’s Space Launch Complex 41 Vertical Integration Facility on Cape Canaveral Air Force Station. Later the same day, the spacecraft will be stacked on top of an Atlas V rocket for final processing ahead of the launch.

Boeing’s uncrewed flight test, which is targeted for Dec. 17, will provide valuable data on the end-to-end performance of the rocket, spacecraft and ground systems, as well as, in-orbit and landing operations. The data will be used toward certification of Boeing’s crew transportation system for carrying astronauts to and from the space station.

NASA’s Commercial Crew Program is working with the American aerospace industry through public-private partnerships to launch astronauts on American rockets and spacecraft from American soil for the first time since 2011. The goal of the program is safe, reliable and cost-effective human space transportation to and from the International Space Station. This could allow for additional research time aboard the station and increase the opportunity for discovery aboard humanity’s testbed for exploration, which includes sending astronauts to the Moon and Mars.

During a media event held in the Florida spaceport’s Space Station Processing Facility high bay, former NASA astronaut and current Senior Vice President of Strategy for Sierra Nevada Corporation (SNC) Space Systems Steve Lindsey revealed the name of the cargo module that will attach to the back of the company’s Dream Chaser spacecraft: Shooting Star.

“It’s an exciting day for us,” said Lindsey, a veteran of five NASA shuttle missions.

Shooting Star is a 15-foot-long cargo module that will attach to the back of the 30-foot-long Dream Chaser. It will be used to deliver more than 12,000 pounds of supplies and other cargo for NASA to the International Space Station as part of the Commercial Resupply Services-2 (CRS-2) contract. Its first flight is scheduled to launch from Kennedy in fall 2021.

Dream Chaser will fly back to Earth and land on the runway at Kennedy’s Launch and Landing Facility, formerly the Shuttle Landing Facility. Shooting Star will have a different fate. It will carry unwanted cargo from the space station, disposing of it while burning up upon re-entry into Earth’s atmosphere. The process of “burning up” is where the Shooting Star name came from, Lindsey explained.

“The cargo module is really interesting because it’s kind of the unsung hero of the whole Dream Chaser cargo system design,” Lindsey said, while standing in front of a Shooting Star testing mockup. “It has a very unique shape — notice how it angles in as you go higher. It’s shaped to handle external and internal payloads.”

Payload capability includes pressurized and unpressurized cargo. Though it was designed specifically for cargo resupply services to the space station, Shooting Star can have many other applications, Lindsey said, including carrying crew, operating as a free-flying satellite and going from low-Earth to lunar orbit.

“It’s a pretty versatile system,” Lindsey said, “and the more we worked on it, the more we realized there are multiple applications for it.”

The Shooting Star mockup was recently delivered to Kennedy from SNC’s facility in Colorado. It will remain at the Florida spaceport, Lindsey said, for testing, processing and training of flight controllers.

NASA selected Dream Chaser for the CRS-2 contract, which involves launching six cargo missions to the space station by 2024.

The United Launch Alliance (ULA) Atlas V rocket set to launch Boeing’s CST-100 Starliner on its maiden voyage to the International Space Station for NASA’s Commercial Crew Program is ready for the mating of Starliner to the top of the launch vehicle.

On Monday, Nov. 4, the Atlas V’s first stage was lifted to the vertical position inside the Vertical Integration Facility at Space Launch Complex 41 at Cape Canaveral Air Force Station in Florida, followed by the mating of two solid rocket boosters to the booster. ULA teams then attached the Centaur upper stage and launch vehicle adapter atop the Atlas V first stage.

As aerospace industry providers Boeing and SpaceX begin to make regular flights to the space station, NASA will continue to advance its mission to go beyond low-Earth orbit and establish a human presence on the Moon with the ultimate goal of sending astronauts to Mars.

The European Space Agency’s (ESA) Solar Orbiter spacecraft arrived at the Launch and Landing Facility, formerly known as the Shuttle Landing Facility, at NASA’s Kennedy Space Center in Florida aboard an Antonov cargo plane from Munich, Germany, on Nov. 1. Upon arrival at the Florida spaceport, the spacecraft was offloaded and transported to the Astrotech Space Operations facility in nearby Titusville, where it will spend the next few months undergoing final preparations, tests and checkouts for liftoff.

Solar Orbiter is an ESA mission that will study the Sun, its outer atmosphere and solar winds. Using high spatial resolution telescopes, the spacecraft will observe the Sun’s atmosphere up close and compare these observations with measurements taken around the spacecraft. Due to its unique orbit, Solar Orbiter will provide the first images of the Sun’s poles. NASA’s Launch Services Program based at Kennedy is managing the launch.

Although developed independently, ESA’s Solar Orbiter and NASA’s Parker Solar Probe, which launched Aug. 12, 2018, are natural teammates. Solar Orbiter’s comprehensive science instruments and unique orbit will help scientists place NASA’s Parker Solar Probe’s measurements in context. By working together in this way, the two spacecraft will collect complementary data sets allowing more science to be gathered from the two missions than either could manage on its own.

The spacecraft’s mission to the Sun is planned for launch on a United Launch Alliance Atlas V-411 rocket from SLC-41 at Cape Canaveral Air Force Station in Florida on Feb. 5, 2020, at 11:15 p.m. EST.