NASA and SpaceX are preparing to launch the final, major test before astronauts fly aboard the Crew Dragon spacecraft and Falcon 9 rocket to the International Space Station as part of the agency’s Commercial Crew Program. The test, known as in-flight abort, will demonstrate the spacecraft’s escape capabilities — showing that the crew system can protect astronauts even in the unlikely event of an emergency during launch. The uncrewed flight test is targeted for 8 a.m. EST Saturday, Jan. 18, at the start of a four-hour test window, from Launch Complex 39A in Florida.

SpaceX performed a full-duration static test Saturday, Jan. 11, of the Falcon 9 and completed a static fire of the Crew Dragon on Nov. 13 setting the stage for the critical flight test.

Prior to launch, SpaceX and NASA teams will practice launch day end-to-end operations with NASA astronauts, including final spacecraft inspections and side hatch closeout. Additionally, SpaceX and NASA flight controllers along with support teams will be staged as they will for future Crew Dragon missions, helping the integrated launch team gain additional experience beyond existing simulations and training events.

After liftoff, Falcon 9’s ascent will follow a trajectory that will mimic a Crew Dragon mission to the International Space Station matching the physical environments the rocket and spacecraft will encounter during a normal ascent. 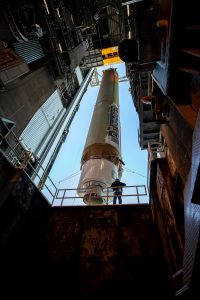 The rocket that will launch a new spacecraft to study the Sun is beginning to take shape at Space Launch Complex 41 at Cape Canaveral Air Force Station in Florida. The first-stage booster for the United Launch Alliance Atlas V rocket is “on stand,” meaning it has been raised to a vertical position inside the complex’s Vertical Integration Facility. In the coming days, the one solid rocket booster needed for the mission will be added to the booster, followed by the single-engine Centaur upper stage.

Solar Orbiter is an international cooperative mission between ESA (European Space Agency) and NASA. The mission aims to study the Sun, its outer atmosphere and solar wind. The spacecraft will provide the first images of the Sun’s poles. NASA’s Launch Services Program based at Kennedy Space Center in Florida is managing the launch. Liftoff is scheduled for Feb. 5, 2020.

NASA’s Launch Services Program (LSP) is ringing in the New Year with three planned science missions in 2020, aimed at studying the Sun, Mars and our oceans. The first two missions will be launching from Cape Canaveral Air Force Station in Florida, while the third will launch from Vandenberg Air Force Base in California.

Launching in February, Solar Orbiter is a collaborative mission between the European Space Agency (ESA) and NASA, which will study the Sun, its outer atmosphere and the solar wind. The spacecraft, developed by Airbus Defence and Space, will provide the first-ever images of the Sun’s poles. The Solar Orbiter spacecraft will launch aboard a United Launch Alliance (ULA) Atlas V 411 rocket, and liftoff is scheduled for Feb. 5. LSP will manage the launch.

NASA’s Mars 2020 mission is targeting to launch in July. Established under the agency’s Mars Exploration Program, the mission will send a rover to the Red Planet to search for signs of ancient microbial life. It also will help us better understand the planet’s geology, collect rock and soil samples that can later be returned to Earth and test new technologies that could pave the way for future human exploration of Mars.

The rover is being manufactured at the agency’s Jet Propulsion Laboratory in California and will be sent to NASA’s Kennedy Space Center in mid-February. The rover will launch on a ULA Atlas V 541 rocket, procured by LSP, and is expected to land on Mars on Feb. 18, 2021.

Sentinel-6/Jason CS (Continuity of Service), the final mission of 2020, is projected to launch later in the year and will observe global sea level changes. The mission – a collaboration between ESA and NASA – aims to collect high-precision ocean altimetry measurements using two consecutive and identical satellites. The Sentinel-6 mission will launch from California on a SpaceX Falcon 9 rocket.