NASA’s virtual passport program started in 2020 as a way for the public to commemorate its virtual engagement in NASA launches and milestones with the NASA Virtual Guest Program. 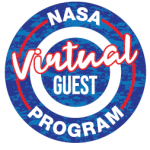 The stamp for the NASA SpaceX 22nd commercial resupply mission will be the eighth stamp offered through the program and the fourth stamp for a launch from Kennedy Space Center.

The Falcon-9 rocket with Cargo Dragon spacecraft will lift off from Kennedy’s Launch Complex 39A on June 3, carrying supplies and science payloads to the International Space Station. 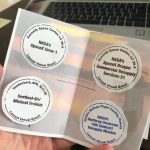 Anyone can receive a stamp by registering to let NASA know they’re participating virtually. Those who register will receive emails with curated launch resources, notifications about NASA activities, and updates on any launch time or date changes.

NASA and SpaceX are targeting 1:29 p.m. EDT on Thursday, June 3, for the company’s 22nd commercial resupply services mission to the International Space Station. The SpaceX Falcon 9 rocket, topped by the uncrewed Cargo Dragon spacecraft, is scheduled to lift off from Launch Complex 39A at NASA’s Kennedy Space Center in Florida.

This will be the second SpaceX mission to deliver science investigations, supplies, and equipment for NASA under the agency’s second Commercial Resupply Services contract. To date, SpaceX has completed 21 cargo resupply missions to and from the space station, providing more than 100,000 pounds of supplies and approximately 80,000 pounds of return mass.

Tune in to NASA TV and the agency’s website for live coverage, beginning Wednesday, June 2, with prelaunch activities.

To learn more about the mission, visit https://www.nasa.gov/spacex.

The Orion spacecraft receives another iconic NASA “worm” logo ahead of the Artemis I mission. On April 28 teams with the agency’s Exploration Ground Systems and lead contractor Jacobs completed painting the retro insignia on the outboard wall of the spacecraft’s crew module adapter (CMA) – the piece of hardware connecting the crew module to the European-built service module – inside the Multi-Payload Processing Facility (MPPF) at NASA’s Kennedy Space Center in Florida.

While a decal of the historic logo was added to the underside of the CMA in September 2020, having it painted on the siding of the spacecraft will make it visible as the spacecraft is poised atop the Space Launch System (SLS) rocket, awaiting liftoff from Kennedy’s Launch Pad 39B.

The worm logo was officially introduced in 1975, retired in 1992, and then made a comeback in 2020, just as NASA entered a new era of human spaceflight. In addition to its appearance on the CMA, the bright red logo also was painted on the SLS twin solid rocket boosters in August 2020.

The Orion spacecraft and Interim Cryogenic Propulsion Stage (ICPS) – the upper stage of the rocket responsible for sending Orion on its journey around the Moon – are currently being fueled and serviced in the MPPF. Once fueling is complete, Orion will move to the Launch Abort System Facility for integration of its launch abort system, while the ICPS will move to the Vehicle Assembly Building to be stacked on the mobile launcher.

Artemis I will be the first integrated test of SLS and Orion and will pave the way for landing the first woman and first person of color on the lunar surface. The mission will be a stepping stone for deep space exploration, leading the agency’s efforts under the Artemis program for a sustainable presence on the Moon and preparing for human missions to Mars.

Click here for a video of the logo being added to the CMA.

What goes into telling the NASA story? At the agency’s Kennedy Space Center, it’s more than pointing a camera and letting it roll. Behind the cameras are dedicated men and women continuously preparing to tell captivating stories like never before. With astronauts once again launching from American soil through the Commercial Crew Program, and preparations underway to send the first woman and first person of color to the Moon as part of the Artemis program, we want you to have a first-class seat to all the action!

NASA has remained committed to capturing and sharing some of our nation’s greatest achievements with the rest of the world, and recent technology upgrades have allowed us to bring those to you in a whole new way.

A new fiber circuit, connecting video feeds from Kennedy’s historic Launch Complex 39A to the NASA News Center, provides different camera views to better showcase human spaceflight and future launches. Along with being the first launch of astronauts from U.S. soil in nearly a decade, the agency’s SpaceX Demo-2 mission in May 2020 also marked the first time this circuit was used. Additionally, teams at Kennedy implemented a live feed system just before launch, providing live footage of NASA astronauts Robert Behnken and Douglas Hurley on their 10-mile ride to the launch pad prior to liftoff.

New fiber optic communication lines allow us to bring you UHD (ultra-high definition) coverage from unique locations, such as the Launch Control Center, countdown clock, crew quarters, crew walkout, Banana Creek viewing site, and even the launch pads. With these connections in place, commentators can host launch broadcasts and briefings outdoors in 4K resolution, placing you right in the middle of the action. We’ve used exterior sets to bring you some of our biggest launches, including Boeing’s Orbital Flight Test, NASA’s Mars 2020 launch, SpaceX’s Demo-1 mission – which earned NASA and SpaceX an Emmy – as well as Demo-2, Crew-1, and Crew-2.

Additional video and visual upgrades include a UHDTV video router that supports existing HD and future UHDTV imagery, painting a crystal-clear picture of everything going on, and a character generator that TV crews can use to create and display graphics showcasing the health of the rockets in real-time. Extra circuits also provide KSCTV (Kennedy Space Center TV) personnel with UHD video feeds of launch crews and VIP guest interviews.

While the visuals are important, what you see isn’t the whole story. More partnerships and collaborations throughout the country make behind-the-scenes communication critical to providing seamless coverage. With an expanded intercom system, we’re now able to communicate with teams at remote locations such as NASA’s Johnson Space Center in Houston or SpaceX’s headquarters in Hawthorne, California. The system connects the TV producer, on-camera talent, camera operators, and master control team to bring you joint coverage from every angle.

Through these expanded capabilities, people all over the world can observe and be a part of NASA launches, missions, and scientific discoveries – an experience that is truly out of this world. This may not be rocket science, but it brings the rocket science to the palm of your hand.