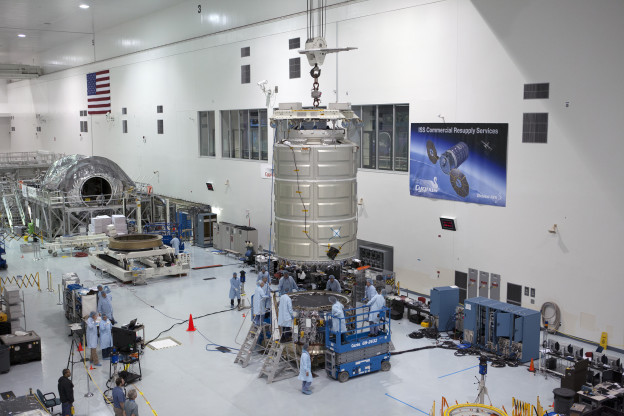 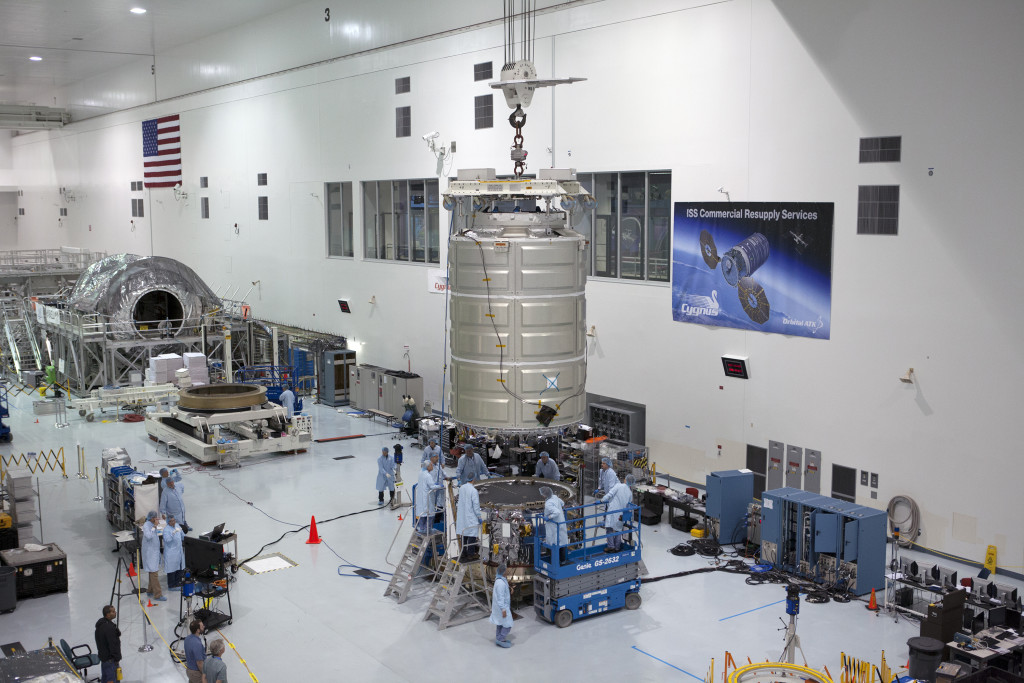 Engineers completed connecting the Pressurized Cargo Module with the Service Module to form the Cygnus spacecraft that will ferry more than 7,000 pounds of supplies, equipment and experiments to the International Space Station during its December mission.

Working inside the Space Station Processing Facility at NASA’s Kennedy Space Center in Florida, crews lifted the cargo module off its work stand and lowered it precisely onto the service module before completing the connections of fasteners and systems. The service module contains the power-producing solar arrays, propulsion system and instrumentation to steer the spacecraft once it reaches orbit.

Not carrying any crew, the Cygnus will fly autonomously to the station where astronauts there will use the robotic arm to latch onto the spacecraft and berth it to a port for unloading. A United Launch Alliance Atlas V will lift the Cygnus into space from Space Launch Complex 41. 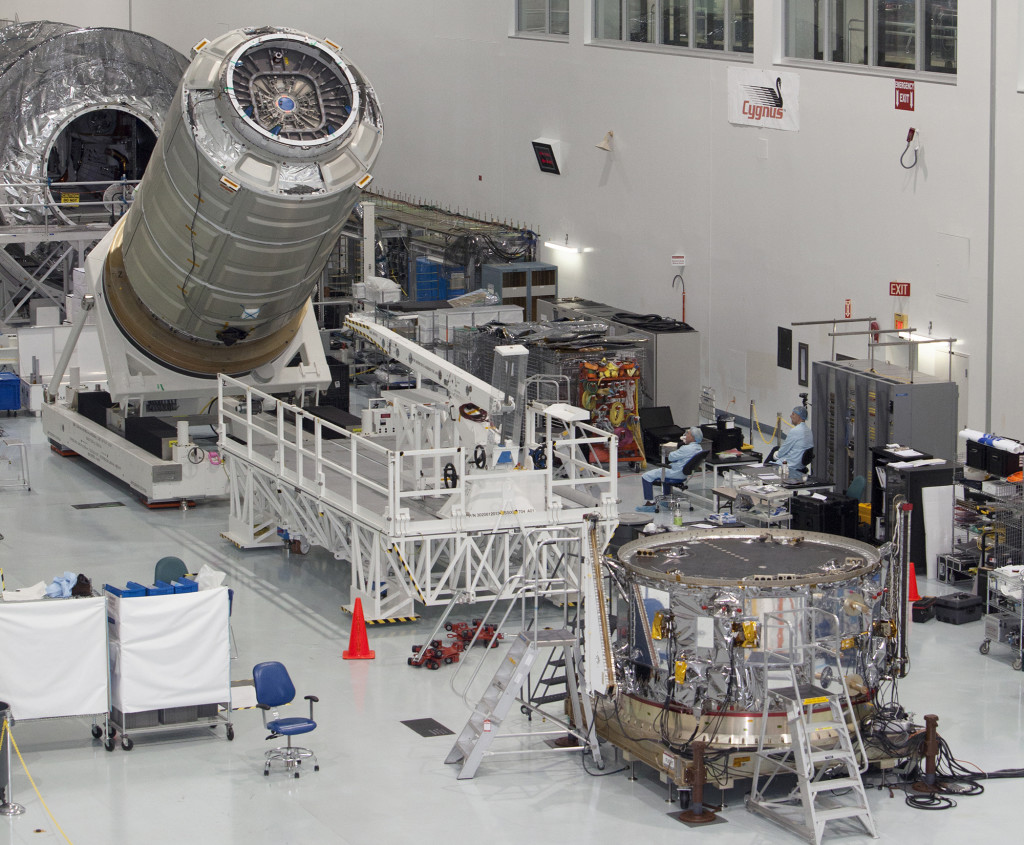 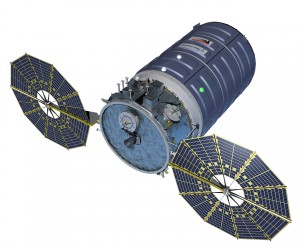 The next cargo module slated to deliver supplies to the International Space Station crew is loaded and is being connected to its propulsion and service module today at Kennedy.

Called Cygnus and built by Orbital ATK, the module is a two-piece spacecraft that when finished will be launched Dec. 3 atop a United Launch Alliance Atlas V to take a host of scientific gear, supplies and other equipment needed aboard the orbiting laboratory.

Engineers and technicians spent the last several days packing the pressurized portion of the spacecraft before rotating the cylindrical module upright so it can be lifted to join the service module. The service module holds the solar arrays and propulsion unit plus other instrumentation that will allow the Cygnus to fly to the station safely without a crew onboard. Ground controllers and astronauts will use the robotic arm on the station to grab the Cygnus and berth it to a port where its supplies can be unloaded and put to their prescribed uses. After about three weeks in space, Cygnus will be released and will fly itself into Earth’s atmosphere to burn up. 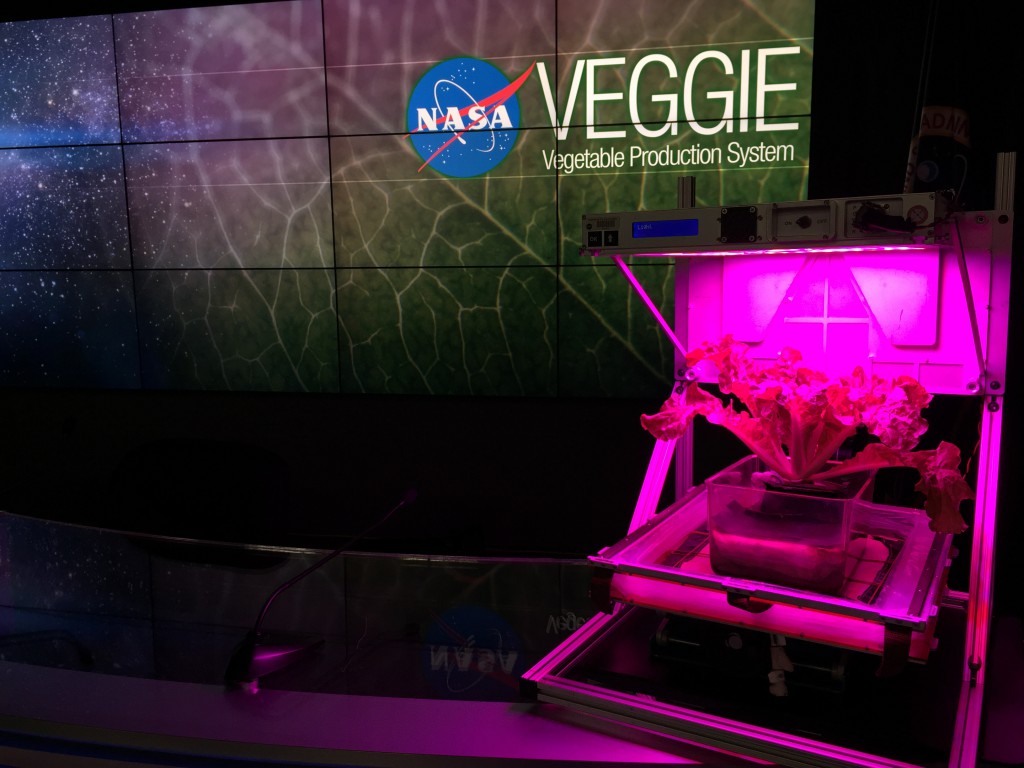 The future for space gardening is bright. And while the ability to grow food in microgravity is an important step on the path to Mars, it also has big implications for farmers – and eaters – here on Earth.

Astronauts Scott Kelly, Kjell Lindgren and Kimiya Yui got the first taste of space-grown food Aug. 10 when they harvested and then sampled lettuce leaves grown on the International Space Station. The “Outredgeous” red romaine lettuce was cultivated in orbit inside the Veggie plant growth system. This morning, the Veggie team at NASA’s Kennedy Space Center harvested lettuce from a ground-based system that otherwise was identical to the small crop grown on the station.

“Veggie has shown us we can grow plants in space pretty darn similarly to how we do on Earth,” Dr. Gioia Massa, the Veggie lead scientist for NASA at Kennedy, said at an employee briefing that included several members of the Veggie team.

“NASA has a huge heritage and legacy of innovation; we have a culture of innovation,” said the center’s deputy director, Janet Petro. “We know the ISS is a great research platform in low-Earth orbit. As we move out to Mars we’re going to have to be ‘Earth-independent.’”

In addition to the benefit to future space explorers, there are clear benefits on Earth, too. As the global population increases, the capability to grow more food crops in tighter spaces becomes more and more important.

“NASA’s Commercial Crew Program is working hand-in-hand, connected with the research aboard ISS and the agency’s efforts to take humans to Mars,” said Lisa Colloredo, associate director of the program. She pointed out that once commercial spacecraft are flying people to the station, the four-person crews will extend the amount time astronauts will be able to spend on research.

Veggie’s success up to this point has provided a lot of confidence that it is possible for space crews to grow their own food, Massa added. Future crews on the International Space Station and on an eventual journey to Mars will be able to rely on freshly grown produce to enhance their diet and provide the psychological boost that comes from tending to a small crop in the otherwise sterile environment of a spacecraft.

“It’s off the Earth, for the Earth – and for the future,” Massa said.

That’s one small bite for a man, one giant leaf for mankind: Astronauts Scott Kelly, Kjell Lindgren and Kimiya Yui of Japan sample the fruits of their labor after harvesting a crop of “Outredgeous” red romaine lettuce from the Veggie plant growth system on the International Space Station.

Learn more about Veggie and its implications for future spaceflight at:
https://www.nasa.gov/mission_pages/station/research/news/meals_ready_to_eat