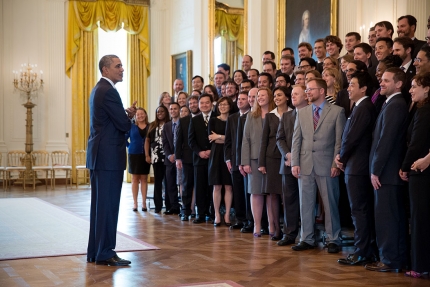 This week I had the honor of meeting five members of the NASA family who are helping the agency reach new heights and reveal the unknown. They are winners of the 2012 Presidential Early Career Awards for Scientists and Engineers (PECASE), the highest honor bestowed by the U.S. government on scientists and engineers beginning their research careers.

Today Drs. Joshua Alwood, Douglas Hoffman, Randall McEntaffer, Tamlin Pavelsky, and Patrick Taylor are visiting agency headquarters with their families to give us a glimpse of the groundbreaking research they are doing. Associate Administrator for the Science Mission Directorate, John Grunsfeld, and others will join me to recognize and celebrate their achievement. Yesterday, these five individuals were recognized in a ceremony at the United States Department of Agriculture along with 97 fellow award recipients from across the Federal government.

NASA research literally spans the universe: from finding planets around other stars, to exploring the diverse worlds of our solar system, to studying our changing climate, to preparing humans to move beyond low Earth orbit. The work of these five emerging leaders reflects the breadth of NASA’s work, and demonstrates how that work benefits life on Earth:

They are studying how advanced manufacturing techniques perform in microgravity, and building precision x-ray gratings for astronomy.

They are using NASA satellite data to better map the Earth’s rivers, and researching the complex impact of clouds and cloud feedback on the Earth’s climate.

They are studying the effects of weightlessness and space radiation on the human body – a critical step in preparing NASA’s future explorers to travel to and from Mars safely.

In addition to their stellar research, the PECASE award recognizes the recipients’ commitment to community service through professional leadership, education or community outreach. This is a particular passion of mine, and something I always enourage early career scientists throughout the agency to incorporate in their busy schedules.  By devoting their time to mentoring and informing the world about the important work we do here at NASA and at our partner institutions, these individuals are making an impact that will be felt for years to come.

The PECASE awards were originally created to foster innovative developments in science and technology, increase awareness of careers in science and engineering, give recognition to the scientific missions of participating agencies, enhance connections between fundamental research and many of the grand challenges facing the nation, and highlight the importance of science and technology for America’s future.

This is a tall order! I am confident that Drs. Alwood, Hoffman, McEntaffer, Pavelsky, and Taylor are up to the task. They represent some of the best and brightest talent in our agency and our university partners, and their work will benefit our nation and advance the frontiers of science.  I am inspired by what they have already accomplished at this early stage in their careers. I look forward to seeing more great achievements from them in the future.

The author is NASA’s Chief Scientist.

NASA‘s human exploration plan employs a building-block approach which begins in low-Earth orbit, with the International Space Station, then takes us around and beyond the moon in early uses of capabilities to take humans to Mars – and safely return them! Central to this plan is how we test capabilities and prepare for long duration deep space travel.

The Asteroid Redirect Mission (ARM) will provide an early use of several important required technologies and capabilities, including the Space Launch System (SLS), Orion, advanced solar electric propulsion, rendezvous and docking, and deep space extra-vehicular activity.  Collaboration across the Agency in science, technology and human space flight will align these activities in a compelling mission to redirect a small asteroid to a stable orbit about the moon, followed by astronauts aboard the Orion spacecraft exploring the asteroid and returning to Earth with samples.

This mission will utilize foundational capabilities for human and robotic exploration.  We will travel beyond LEO to the proving ground of cis-lunar space, further than humans have ever traveled before, where we will expand and test our capabilities in a rendezvous with the redirected asteroid in lunar orbit.  These steps will build the foundation for further deep-space exploration.  With the technologies and techniques we develop, we will enable expeditions to multiple destinations, ultimately allowing us to pioneer Mars.

On Monday and Tuesday this week, I joined dozens of engineers and scientists from around the country for a workshop on the Asteroid Redirect Mission (ARM) at Caltech’s Keck Institute for Space Studies. A Keck study in 2012 that proposed an asteroid redirect mission and this follow-on study is examining future applications of mission technologies. Since the Keck study report release in 2012, NASA has made enormous strides developing potential mission concepts, identifying candidate target asteroids, and challenging the public to submit their ideas. Two weeks ago, we hosted an Asteroid Forum that provided an update on ARM concepts and new opportunities for public participation.

This week’s Keck Institute meeting focused on ways the ARM mission could create new opportunities for exploration and industry. NASA will certainly use ARM systems and technologies in putting Mars within our grasp for human exploration. Other groups are interested in the potential of ARM technologies for such things as science investigations, planetary defense against potential asteroid threats, and commercial mining of asteroids.

It also speaks to a larger story of American human spaceflight. As NASA sets it sights on getting to Mars, it’s creating new opportunities for the nation. And as we pull together as a nation to create these new opportunities, we’ll do amazing things to expand human presence farther into the solar system. I invite you to follow our progress as ARM takes shape and we step closer to human missions into deep space onto Mars: www.nasa.gov/exploration.