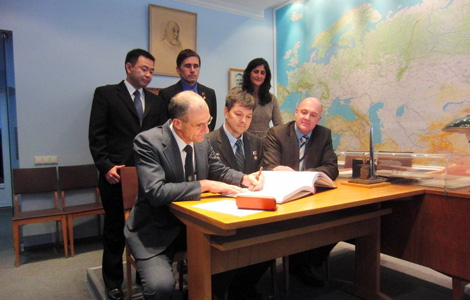 Space Station expeditions are planned for six months. Some may be a fewweeks shorter, some longer. Malfunctions in your spacecraft can impactthe mission duration either way by two months or more.

There is more to your mission than just the time in orbit, however.Launching on the Russian Soyuz rocket, the only current means to get toand from Station, requires crews to be in Russia two months beforelaunch. And there is that last week of ESA training with our Europeancolleagues that is tacked onto the beginning of the trip.

Upon your return to the confines of earth’s gravity, there could be arehabilitation period of up to a week, living in crew quarters underthe watchful eye of the flight doctors. The length of door-to-door timeaway from home easily extends the mission to eight and a half months.Then, once you are home, the next month does not belong to you (or yourfamily). Your body is subjected to post-flight medical experiments; allare necessary to complete the before, during, and after science that isextracted from your soul. So it’s more like 10 months before you aretruly able to relax.

Still, thanks to radio, video, and Internet, our ability to stayconnected with our families and mission control while in space isunparalleled. We may no longer be on the planet, but we have notvanished from Earth. Compared to the historic exploration experience, wehave it good.

Expectations are important. Expedition 6 in 2002 was going to be oneof the shortest missions to date, somewhere between 1½ and 2½ months.Because of the Space Shuttle Columbia disaster, which happenedwhile we were on orbit, our mission was extended to nearly 6 months. Asmy commander told me before launch, “When going to space station, it iswise to be mentally prepared to be gone for a year.”  It turns out hewas half right.