On space station, we have a closet module. Its prosaic name is PMM, an acronym that has metamorphosed beyond the original assemblage of words to become a noun on its own, pronounced pee-em-em (only at NASA can we create new words without vowels). In a former life, it was an MPLM (another vowel-less word), a special transport container that flew up and down to space station in the back of the Space Shuttle. Made in Italy for NASA, the PMM was formally christened Leonardo—obviously named after a Teenage Mutant Ninja Turtle.

On my STS-126 Shuttle flight, I had the pleasure of moving Leonardo from the Shuttle payload bay and berthing it to the nadir hatchway on the station’s Node 2, using the Canadian robotic arm. Operating the Canada arm is a bit like working with a fancy backhoe, and requires its own skills. Once the module was berthed, we opened the hatch and unloaded many tons of much-needed equipment and supplies over the next 12 days.

For its return voyage, we loaded it up with garbage and trash. Included in the trash were bags of urine left over from human physiological experiments. These weren’t ordinary bags of urine; these were eight-month-old bags of urine. I did not need to read the label—my nose could identify the contents. We brought garbage-laden Leonardo home, but due to bad weather at the Cape, we landed at Edwards in California. It took another week before the Shuttle was transported home, and another week after that before Leonardo was removed from the payload bay and placed in its holding fixture. That was followed by the Christmas holiday. By the time folks got around to opening Leonardo, it had been sitting for well over a month, and some of the bags had leaked all over the inside of the module. I happened to be at the Cape the day after the technicians opened the hatch. It was not a pretty sight. I felt partly responsible, since I had been the one who did the orbital packing. I offered, but the technicians would not let me help clean up the mess. 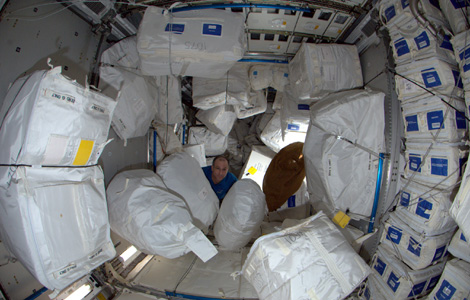 In orbit, the Leonardo module is for me a special place. It is cool, quiet, soothing—a good place to reflect and recharge. But like most closets on Earth, the PMM is a total mess. The crew is so busy maintaining and utilizing space station that no one has time to properly arrange things, despite our good intentions. A typical clutter-creating scenario might go like this: Say you are in the middle of working on the station’s control system. Swapping out motherboards is a delicate task, akin to doing computer brain surgery. If you bend a pin while inserting a card, you can fry the whole works, and there are precious few spare parts. In the midst of this intensity your stomach starts rumbling, with the associated low blood sugar shakes. Your watch shows that you have been at this for hours without a break. So you fly over to Node 1 and dive into the module where the primary stocks are located, only to find that the pantry is down to vegetables and tofudibeast. You need meat and potatoes to keep going, so you float over to the PMM and pull out a new “meats in pouches” package. At the galley, you cut open a meat pouch, only to have a big bloop of gravy squirt out and make a mess. Reaching for the wipes, you discover that the last one had been dispensed to clean up the previous gravy squirt. Flying to PMA 1 (the connecting tunnel between the U.S. and Russian segments), where the hygiene supplies are kept, you find that the staging bag for dry wipes is empty. Once again you dive into the PMM, searching for the mother lode of dry wipes. You refill the PMA 1 staging bag, and clean up your mess.

All of these packages have a nine-digit bar code. We are required to log these in our inventory management system, but often the bar code reader does not work. For this case of 20 dry wipe packages and a meats-in-pouches package, you have to write down 189 alpha-numeric characters (without a mistake). These numbers must later be typed up in a crew note or called down to mission control. So you think, “I will do all this inventory paperwork later.”

That’s how the PMM gets to be a mess.

When spare moments present themselves, I will go into the PMM and straighten up the clutter. Floating among the bags undulating on their anchor chords, I have the sensation of scuba diving in a kelp bed thicket. Then I catch up on the inventory paperwork. With luck, I’m able to scribble down all those nine-digit bar code numbers correctly.