The sky is not the limit for producing artistic compositions. Put a camera on a tripod, point at a dark starry sky, and hold the shutter open for about 10 minutes, and the image will show stars as circular arcs. Normally, these star trails are created as the Earth rotates on its axis, with the center being close to either Polaris, the north star, or the Southern Cross, depending on which hemisphere you are in. 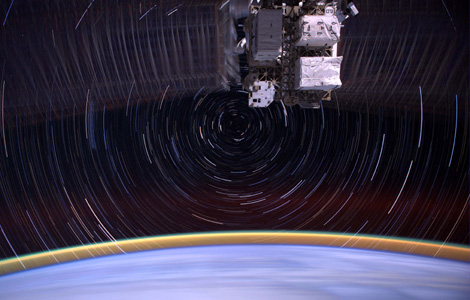 I got the idea to do the same thing from Space Station; however, the physics of orbit adds a special twist. As Space Station orbits, it keeps one side always facing the Earth (the nadir direction from our point of view). This requires the Station to complete one revolution about its axis each orbit, just like the Moon. ISS rotates about its center of mass, which happens to be in the Unity, or Node 1 module. So it rotates almost aligned with the Station’s long, backbone-like truss.

Space Station makes one revolution every 90 minutes (the Moon takes 28 days). As a result, long-exposure pictures taken from the Station show star trails as circular arcs, with the center of rotation being the poles of Space Station (perpendicular to our orbital plane). Space Station is inclined 51.6° from Earth’s equator, so the “poles” are now at 38.4°.

My star trail images are made by taking a time exposure of about 10 to 15 minutes. However, with modern digital cameras, 30 seconds is about the longest exposure possible, due to electronic detector noise effectively snowing out the image. To achieve the longer exposures I do what many amateur astronomers do. I take multiple 30-second exposures, then “stack” them using imaging software, thus producing the longer exposure.

Due to our altitude, it is possible to see both the north and south axis of our orbit at the same time. This makes possible star trail images with two circles defined by arcs with opposite inflections. This geometry is hard to arrange from only one window so I use a fisheye lens, one with a full 180° image circle, to make this composition.

In addition to the star trails, many other phenomena of nature can be seen. But I’ll save that topic for another post. 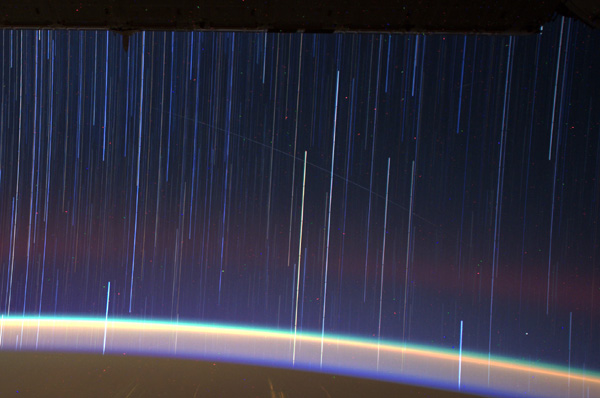 14 thoughts on “On the Trails of Stars”