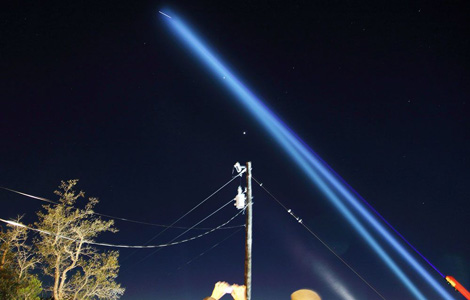 There’s more to that recent Space Station flash by an amateur astronomy group than may have met the eye, so here are a few more details.

Lasers produce not only monochromatic light, but also a unique intensity profile. If you take a cross-section of the beam and plot the intensity, it is far from uniform. Mathematically, the profile takes the form of what’s known as a Gaussian distribution, or bell curve. This vastly simplifies calculations for the beam propagation. The divergence of a laser beam—how quickly it spreads—is much less than for an equivalent beam of broad-spectrum white light, such as the one produced by a spotlight.

If you project a typical two-millimeter-diameter laser beam 400 kilometers, or 240 miles (the altitude of Space Station), the resultant beam diameter is about 1 kilometer. This has two significant impacts. First, precise tracking is needed to keep this 1-kilometer spot on the 200- meter cross-section of Space Station from a distance of 400 kilometers. This is no small feat, as the Station is a moving target in the sky. Second, the intensity of the laser beam falls in proportion to its cross-sectional area. In this case, an initial beam of 2 millimeters expanded to 1 kilometer, reducing the intensity by a factor of about 250 billion. The rated output of the laser also will be reduced by this factor when viewed by the crew on Space Station, and so does not pose a threat to human eyesight. Please note the calculations are different when flashing an airplane, something that must be avoided. For the Space Station flash, the San Antonio astronomers used a one-watt laser and a gang of two 850-watt mercury-argon arc lamps. Both were clearly visible from my vantage point.

5 thoughts on “More About That Flash”