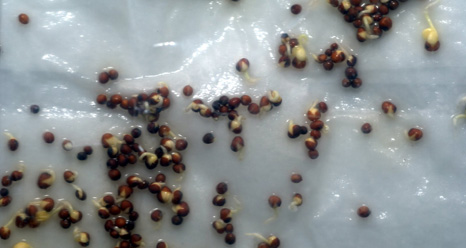 We have two new crewmates, Sunflower and Broccoli.  Sunflower has a long stem for the size of his leaves.  He is standing tall.  Broccoli is small and weak.  His sprout is so small that without the normal gravitational signals, surface tension forces keep his cotyledons from breaking free from the damp pigmat medium.  Effectively, his first two leaves are glued down to a wet layer.  Within a day or two mold takes over and the poor sprout dies.  It grieves me to see them die.  Life can be tough on the frontier.

Gardener picked one sprout out from the damp pigmat and stood him up with a piece of Kapton tape.  An experiment he said it was.  After a few days Broccoli was strong enough to stand on his own.  He is still very weak and may not survive.

Sunflower is becoming a slackard.  He is lazy.  His stem is now about 40 centimeters long but is so thin and spindly that on Earth he would not be able to stand.  A small breeze would cause his stem to buckle.  But here in weightlessness, his stem does not need support so he is doing very little to strengthen it.  The same thing happens to Gardener.  He has two stems and they are getting spindly as well.  But he is working hard to keep his strength.  I know this because he takes me to the exercise machine when he works out and I get to drink real sunlight from the cupola windows while he pushes against heavy forces that simulate weightlifting on Earth.  My gardener works out on this machine for two hours every day.  Are we exploring the frontier or at health camp?  Maybe a bit of both.  Most of his effort is focused on his stems with exercises called squats and deadlifts.  His stems may be thin but he is keeping them strong.

Broccoli survived the surface tension forces and the mold.  He is now 10 centimeters tall and has deep rich green leaves.  He must like drinking the compost tea.   I still find it sour and not to my liking.  My gardener also likes to put his nose close to Broccoli.  I am not jealous, he has told me that I am still his favorite.

22 thoughts on “Diary Of A Space Zucchini”