In space I see things that are not there. Flashes in my eyes, likeluminous dancing fairies, give a subtle display of light that is easy tooverlook when I’m consumed by normal tasks. But in the dark confines ofmy sleep station, with the droopy eyelids of pending sleep, I see theflashing fairies. As I drift off, I wonder how many can dance on thehead of an orbital pin.

The retina is an amazing structure. It’s more impressive than film ora CCD camera chip, and it reacts to more than just light. It alsoreacts to cosmic rays, which are plentiful in space.

Cosmic rays are fragments of atoms—some the pieces of farawayexploded stars, some leftover debris from when the universe formed.These atomic fragments move at high speeds, and like X-rays, penetratedeep into material where they are eventually absorbed. Fortunately, ouratmosphere absorbs most of them, so they do not pose significantproblems for Earth dwellers (except for the many unfortunate effects toour bodies that we have collectively named “the aging process”). 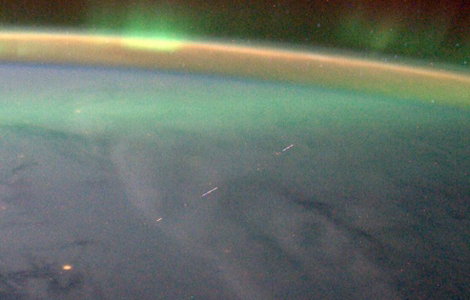 Space is different. Free from the protection offered by theatmosphere, cosmic rays bombard us within Space Station, penetrating thehull almost as if it was not there. They zap everything inside, causingsuch mischief as locking up our laptop computers and knocking pixelsout of whack in our cameras. The computers recover with a reboot; thecameras suffer permanent damage. After about a year, the images theyproduce look like they are covered with electronic snow. Cosmic rayscontribute most of the radiation dose received by Space Station crews.We have defined lifetime limits, after which you fly a desk for the restof your career. No one has reached that dose level yet.

When a cosmic ray happens to pass through the retina it causes therods and cones to fire, and you perceive a flash of light that is reallynot there. The triggered cells are localized around the spot where thecosmic ray passes, so the flash has some structure. A perpendicular rayappears as a fuzzy dot. A ray at an angle appears as a segmented line.Sometimes the tracks have side branches, giving the impression of anelectric spark. The retina functions as a miniature Wilson cloud chamber where the recording of a cosmic ray is displayed by a trail left in its wake.

The rate or frequency at which these flashes are seen varies withorbital position. There is a radiation hot spot in orbit, a place wherethe flux of cosmic rays is 10 to 100 times greater than the rest of theorbital path. Situated southeast of Argentina, this region (called theSouth Atlantic Anomaly) extends about halfway across the Atlantic Ocean.As we pass through this region, eye flashes will increase from one ortwo every 10 minutes to several per minute.

Our brain interprets its sensory input and creates a map of reality.Philosophers have for centuries contemplated this question. As Platowrote, we see only the shadows of a larger and richer reality. On SpaceStation, I drift off to sleep, thinking of the nature of the “real”universe while observing my personal reality of dancing fairies.

13 thoughts on “Flashes of Reality”