TodayGardener and his crew will depart in their seed pod; the replacement crew is readyto carry on in their place.  He iswearing his space suit undergarments. Not too stylish but functional.  Hegave all of us an extra long smell.  Hisnose twitched with the slightest tickle from the leaf hairs on little Zuc.  He said that what will be is for thebest.  It has been a wonderful journey;one chapter is closing, another is opening.  He had tears in his eyes, not just a smalldrop at the corners but a pool that was making him blink.  He reached up and turned out the light.  In the frontier you should not be afraid ofthe dark. 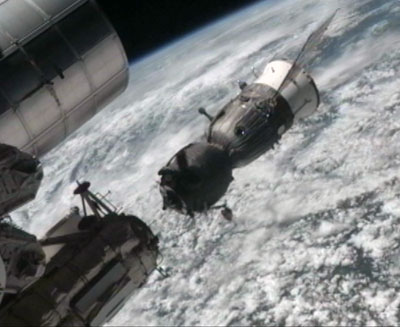 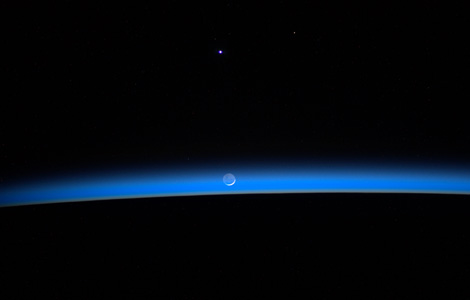 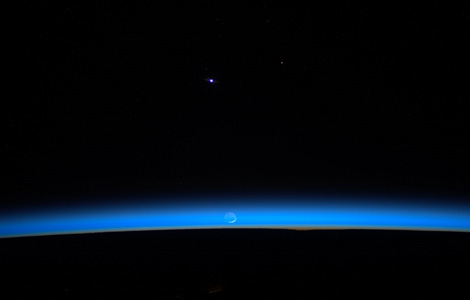 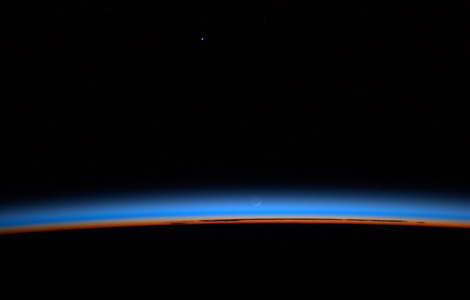 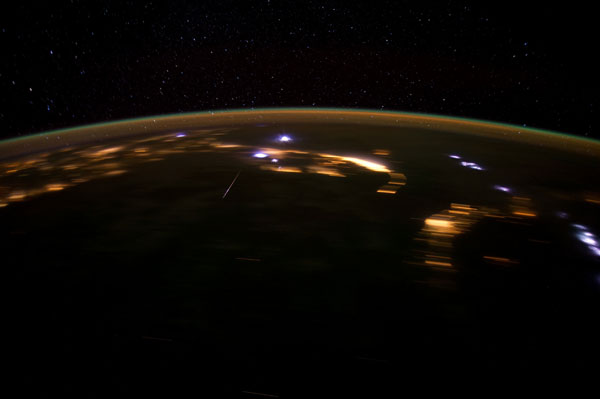 April22
Todaywas the peak of the Lyrid meteor shower. We set up four cameras in the cupola simultaneously takingpictures.  Gardener said there wereplaces on Earth that were doing the same and all these pictures taken togetherwill make a very interesting scientific data set.  Since I had been placed next to a window, Iwas living through 16 periods of day-night every 24 hours.  Jet-lagged, I could thus stay awake duringthe night and help in the observations.

May1
Gardenerhas been spending a lot of time playing a computer game.  His computer is near our grow light so we canwatch him.  He plays in the morningbefore works starts and in the evening after work is over.  He must find this relaxing.  The game he plays is called “Catch theDragon”.  The best part about this gameis that he does not have to put in any quarters. 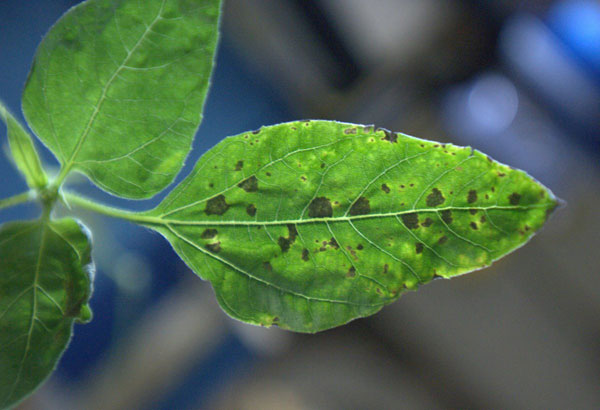 May5
Sunflowerhas brown patch.  His leaves are coveredwith dry, dark blotches.  He is nothappy.  Gardener says it looks like afungus.  I am afraid that if something isnot done we are going to lose Sunflower. The crew medical kit is designed for animals not plants so there are nomedications for this disease.  Gardeneris treating Sunflower with a disinfectant wipe that has an antibacterial agentcalled BZK (Benzalkonium chloride).  Wedo not know if this is going to work. Our spacecraft is designed for animals so life can be a struggle forplants.  On the frontier, the answers arenot found in the back of the book and sometimes you have to venture into theunknown and improvise. 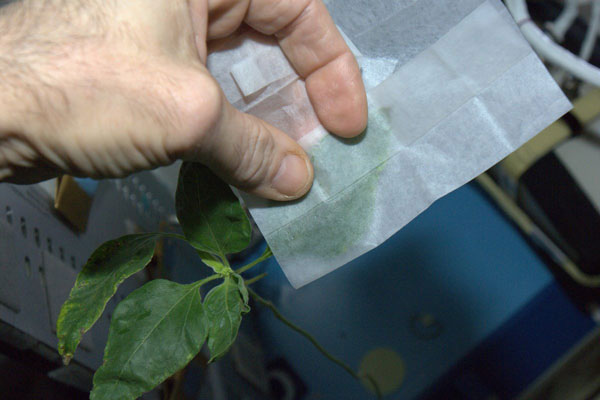 May11
TheBZK wipes seem to be helping.  Gardenerpats down Sunflower’s leaves every other day. He does this with the healthy new green ones as well.  Sunflower is beginning to smile again.  Broccoli and I seem resistant to this so heis not treating us. 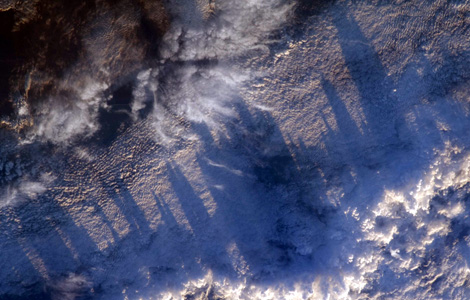 The day before launch

Your last day on Earth

Robbing the piggybank of time

to spend it onwhat ever you desire

We live in quarantine

a flower by anyother name

You know your crew well

I have said my good byes

andtime for a good cry

You eat anything you want

No one speaksof this as a last supper

You time your bathroom habits

do I drink mymorning coffee?

A solitary walk with nature

Focus on your duties

it won’t failbecause of me

the root toall my strength

Oh how does one spend your last day on Earth 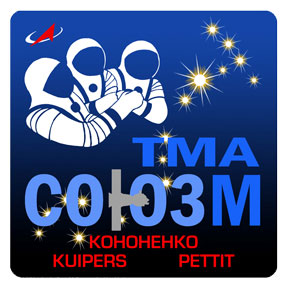 March 26
I havenew leaves!  I am no longer naked to thecosmos.  They are not as big as beforehowever they are just as green.  Broccoliand Sunflower have leaves as well and are vibrant.  We all have happy roots.  This is a hard to explain to a non-plant, butI am feeling very zucchini now. 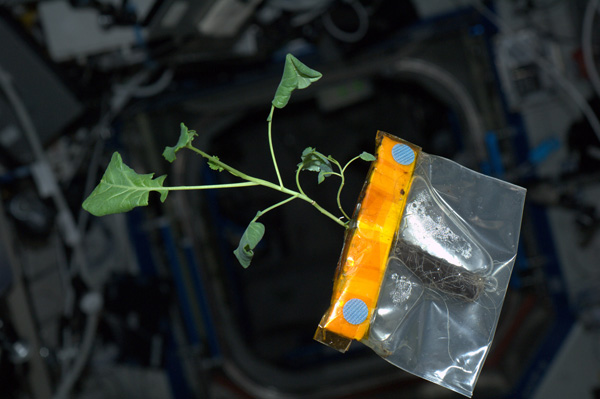 March 27
We areall back in the space flight game. Tomorrow is a big day.  Anunplanted spacecraft is arriving with a cargo of much needed supplies.  If the automatics fail,we as crew have to be prepared to take over in the final stages ofdocking.  I am ready; it will not failbecause of me.

March 28
Thecargo spacecraft arrived and docked without any problems.  We have had all this training, we haveprepared with leaf and stem just in case things go wrong.  There is a small voice inside that would likethe chance to use this training, thus saving the day in the face of amalady.  On the frontier of space, it isunwise to wish for malfunctions; you do not want to be a hero.

March31
We had along and tiring week.  There was muchactivity that took us well into Friday evening. We were all looking forward to some off duty time.  Gardener said he would treat us to somewindow time.  There is nothing likecatching a few rays to green up the foliage. Saturday morning, the big gardener that speaks from the wall told us thecargo vehicle had an electrical failure and might need to undergo a contingencyundock in the next day or two.  It wasplanned to stay docked for months where we could unpack the supplies in anorderly process over a three-week period. To save our precious supplies, we had one day to do three weeks ofwork.  With all the large bags floatingby, it was good to stay out of the way. Any one of them could have easily smash us into salad.  Later that evening, Gardener came by and wepresented him with our vibrant green and tickled his nose with our fresharoma.  When we saw a tired smile come tohis face, we knew we had done our part in this contingency.

smitten by the sight of Earth.

witha face of such beauty.

As to launcha thousand ships,

untilthey can take her as their own.

Notice that as the burn progresses, a halo of exhaustaccumulates that is visible when the thrusters fire for thrust corrections. 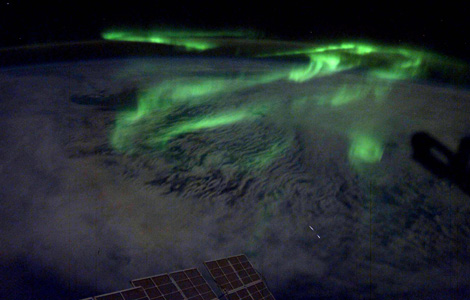 Seeing as how April is National Poetry Month….

Space is My Mistress

By mistake I had taken a picture in the Space Station Cupolathat showed the reflection of my face in all sevenwindows. So I set up to intentionally do this, with an artistic flair. Hereis the result. 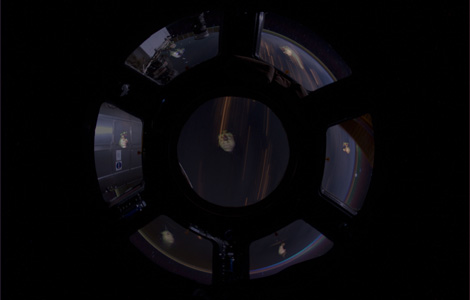