Cheers erupted in mission control at NASA’s Jet Propulsion Laboratory as controllers confirmed that NASA’s Perseverance rover, with the Ingenuity Mars Helicopter attached to its belly, has touched down safely on Mars. Engineers are analyzing the data flowing back from the spacecraft.

The entry, descent, and landing team started on console at mission control at NASA’s Jet Propulsion Laboratory at 8:30 a.m. EST (5:30 a.m. PST) this morning. They are preparing for the spacecraft to start blazing through the Martian atmosphere at around 3:48 p.m. EST (12:48 p.m. PST). At the time of landing, Mars will be 127 million miles (204 million kilometers) from Earth. At this distance, the one-way light time – the amount of time for a signal to get from Perseverance to Earth – is 11 minutes, 22 seconds.

And be sure to keep your eyes peeled, because cities around the country are celebrating the landing by lighting the town red. The Empire State Building in New York began lighting its tower red on Tuesday, Feb. 16, starting at sunset, the Los Angeles International Airport gateway pylons will glow red from sundown beginning today, Wednesday, Feb. 17. Other sites in the United States recognizing the upcoming landing include select buildings along the Chicago skyline, such as the Adler Planetarium.

During the cruise phase of the mission (the time between launch and landing), engineers on Earth have been keeping close tabs on the spacecraft. Major activities during cruise have included:

While Perseverance is getting ready to land this Thursday, Feb. 18, you can get ready, too! Use this toolkit to get the latest updates, download materials, and tune into programs as we get ready to #CountdownToMars. The first of many pre-landing news briefings begin Tuesday, Feb. 16, at 10 a.m. PST (1 p.m. EST). You can view the full schedule – including educational shows, news briefings, and landing-day commentary – at our “Watch Online” guide.

Launched on July 30 at 7:50 a.m. EDT (4:50 a.m. PDT), Mars 2020 entered a state called safe mode soon after it was placed on an interplanetary trajectory because a sensor indicated that part of the spacecraft was slightly colder than expected. When a spacecraft enters safe mode, all but essential systems are turned off until it receives new commands from mission control.

“With safe mode exit, the team is getting down to the business of interplanetary cruise,” said Mars 2020 deputy project manager Matt Wallace of NASA’s Jet Propulsion Laboratory. “Next stop, Jezero Crater.”

Managed by JPL, a division of Caltech in Pasadena, California, the Mars 2020 Perseverance rover is part of a larger program that includes missions to the Moon as a way to prepare for human exploration of the Red Planet. Charged with returning astronauts to the Moon by 2024, NASA will establish a sustained human presence on and around the Moon by 2028 through NASA’s Artemis program. 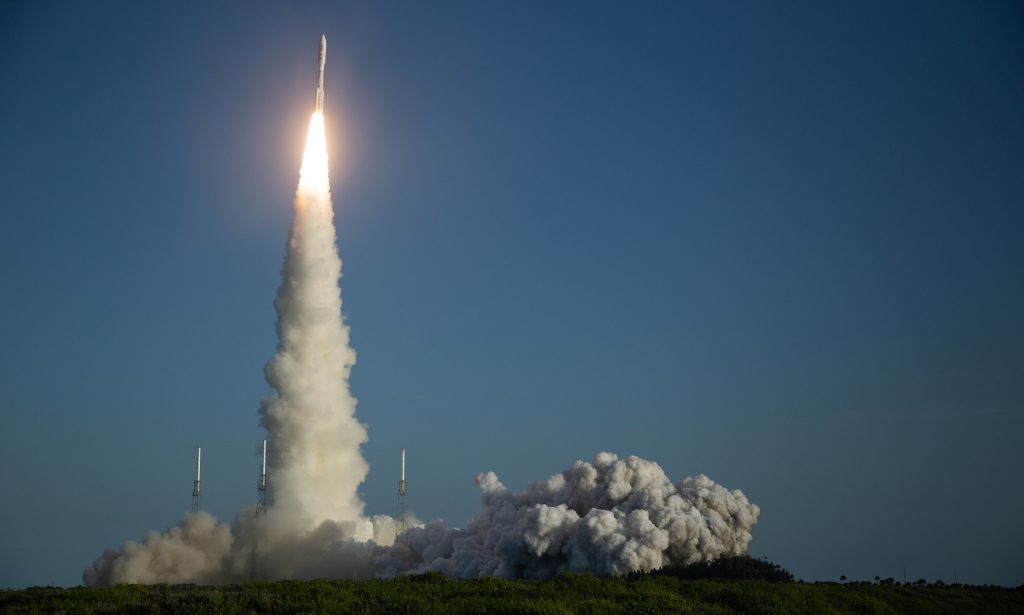 The team controlling NASA’s Mars 2020 Perseverance rover has received telemetry (detailed spacecraft data) down from the spacecraft and has also been able to send commands up to the spacecraft, according to Matt Wallace, the mission’s deputy project manager. The team, based at NASA’s Jet Propulsion Laboratory in Southern California, has confirmed that the spacecraft is healthy and on its way to Mars.

“First, the proximity of the spacecraft to Earth immediately after launch was saturating the ground station receivers of NASA’s Deep Space Network. This is a known issue that we have encountered on other planetary missions, including during the launch of NASA’s Curiosity rover in 2011. The Perseverance team worked through prepared mitigation strategies that included detuning the receivers and pointing the antennas slightly off-target from the spacecraft to bring the signal within an acceptable range. We are now in lock on telemetry after taking these actions.

“The second issue was a transient event involving temperature on the spacecraft. The mission uses a liquid freon loop to bring heat from the center of the spacecraft to radiators on the cruise stage (the part that helps fly the rover to Mars), which have a view to space. We monitor the difference in temperature between the warm inlet to the radiators and the cooler outlet from the radiators. As the spacecraft entered into Earth’s shadow, the Sun was temporary blocked by Earth, and the outlet temperature dropped. This caused the difference between the warm inlet and cooler outlet to increase. This transient differential tripped an alarm and caused the spacecraft to transition into the standby mode known as ‘safe mode.’

“Modeling by the team predicted something like this could happen during eclipse – the time when the spacecraft is in Earth’s shadow – but we could not create this exact environment for tests prior to launch. Nor did we have flight data from Curiosity, because its trajectory had no eclipse. We set the limits for the temperature differential conservatively tight for triggering a safe mode. The philosophy is that it is far better to trigger a safe mode event when not required, than miss one that is. Safe mode is a stable and acceptable mode for the spacecraft, and triggering safe mode during this transitional phase is not problematic for Mars 2020.

“With the understanding of the causes of these issues, we are conducting the operations necessary to move the spacecraft back out of safe mode and into normal cruise mode.”

With three days to go until liftoff of NASA’s Mars 2020 Perseverance rover, everything is on track for Thursday’s planned launch to the Red Planet.

“The launch readiness review is complete and we are indeed ‘go’ for launch,” NASA Administrator Jim Bridenstine said during Monday’s news conference at the agency’s Kennedy Space Center in Florida. “This has been an amazing team effort.”

The historic mission has remained on track, despite unprecedented challenges from a worldwide pandemic.

“We are in extraordinary times right now with the coronavirus pandemic, and yet we have, in fact, persevered,” Bridenstine said. “And we have protected this mission because it is so important.”

Perseverance, which will reach Mars on Feb. 18, 2021, is carrying seven different scientific instruments. The rover’s astrobiology mission, developed under NASA’s Mars Exploration Program, will search for signs of past microbial life. Ingenuity, a twin-rotor, solar-powered helicopter attached to the belly of the rover, will become the first aircraft to fly on another world.

“I just couldn’t be happier to be here today and have this amazing mission on top of a rocket and ready to go,” said Thomas Zurbuchen, associate administrator, NASA’s Science Mission Directorate. “From this launch readiness review … all the issues are addressed and we are in fact ready now; we’re just counting down and really celebrating with the team.”

Perseverance will collect samples from the Red Planet that could be returned to Earth on a future mission. These samples would provide unprecedented information about the Martian climate and weather.

The mission has involved thousands of people in a cross-agency effort that included scientists from around the world. In the U.S., flight hardware was built in 44 states, involving more than 550 cities, towns and communities.

“So no matter where you are in this country, you don’t have to go very far probably to find somebody who has been a part of this mission,” Wallace said. “It’s a tremendous team effort.”

Multiple events will be broadcast Tuesday on NASA Television and the agency’s website: NASA Edge Rollout show, from 10 to 11 a.m.; Mars 2020 Mars Sample Return briefing, from 2 to 3 p.m.; and Mars 2020 Mission Tech and Humans to Mars briefing, from 4 to 5 p.m.

Follow along at blogs.nasa.gov/Mars2020 for live countdown and launch coverage starting Thursday at 7 a.m.