You can watch the post-launch press conference under way on NASA TV.

“This is the result of the effort of a really tight team that’s been working really hard,” said NASA Administrator Charlie Bolden as he congratulated the MAVEN launch teams on Monday’s liftoff. “I hope this mission serves as a model for those that come after it.” 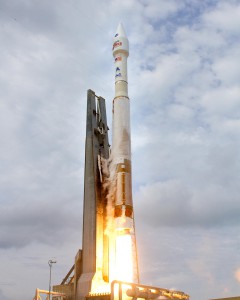 Another roar of applause today as MAVEN deployed its twin solar arrays. The gull-wing-shaped arrays are essential to generate electrical power for the spacecraft and recharge the spacecraft’s batteries.

MAVEN is on its own now, headed for Mars! Applause roared up from the control rooms.The Centaur is far behind the scientific spacecraft and getting farther behind. The Centaur will be maneuvered so it doesn’t interfere with MAVEN or Mars later. Next up for MAVEN is the unfurling of its gull wing solar arrays so it can begin recharging its onboard batteries in about 20 minutes.

The Centaur’s small thrusters are positioning the stage and MAVEN into the proper attitude before releasing the 5,410-pound spacecraft to fly on its own.

The Centaur engine shut down as planned after putting MAVEN on a proper course for Mars orbit. MAVEN, with its solar arrays still folded, will spring free of the Centaur stage in about six minutes.

Centaur’s RL-10 engine has ignited! This burn will last 5 1/2 minutes and put MAVEN on its final trajectory to Mars.

We are 3 minutes out from the re-ignition of the RL-10 engine on the Centaur upper stage that will push MAVEN onto its trajectory to Mars.