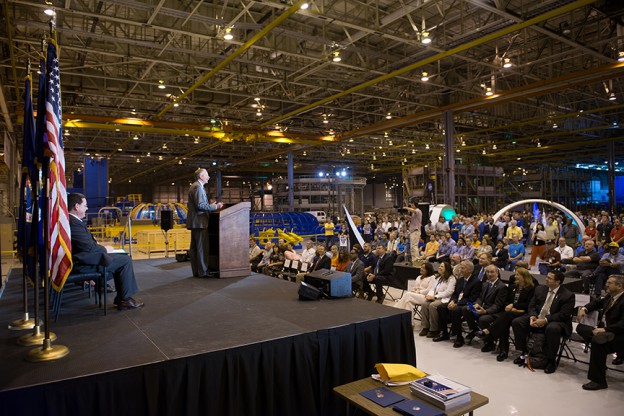 To kick off his visit at Michoud, Gerstenmaier held an all-hands meeting with Michoud employees. Roy Malone, Director of the NASA Michoud Assembly Facility, kicked off the event by introducing the speakers and welcoming the workforce. Gerstenmaier’s comments centered around his pride in Michoud’s workforce and the program successes our workforce has achieved.

“Before me, I see a team that will be putting together the next vehicle taking NASA beyond low Earth orbit and beyond the moon… each one of you here in this group will start that foundation and that movement,” he stated, “I have total confidence in your ability to get the job done safely, on time and within budget.”

Next, two teams were recognized for their exemplary performance. The Safety Insta-gators, represented on-stage by member Debbie Marino, were recognized for their work in identifying and mitigating safety issues at Michoud and emphasized the team’s dedication to building a culture of caring within the workforce.  The Launch Abort Systems (LAS) Fairing Manufacturing Team, represented by Jay Leighton, was lauded for their outstanding performance in the fabrication and delivery of the Orion Exploration Flight Test-1 LAS hardware.

Barnes commented, “This program is exceeding expectations on all of the plans… I’ve never seen a program perform this well at this stage.” She recognized the work force for their superior performance and unwavering support for the program.

After the ceremony, the participants were invited to tour the facility and view the progress being made on the SLS and Orion MPCV assembly line.