Today was the day!!! Wefinally performed our Combine System Test. In general, the test ran smoothly,and everything went as I expected. However, I have to confess, I could not helpbut feel anxious the entire time. I am not sure why. I have been doing pre-CST,and bench test for almost a month, but I believe every time is different.

Today, I was lucky tocount with the assistant of one of our engineers (Roger). He kept an eye on allmy movements, so I felt a little bit more confident, but still, I think anxietywon the battle.

Once the test finished,I finally could relax and have some fun! I was waiting to see the results fromthe computers. We usually can take a look at the data from our ground computerat any time, but sometimes, it is better to see the results from the aircraftcomputer (you know, if satellite communication fails, the aircraft computerstill contains most of the data). I cannot complain; the results from the testwere good. We were able to send commands from the ground and our instrumentexecuted them perfectly. We tested the heaters and the pumps. We did not takeany sample since we were on the ground. But we are confident that if theheaters and pumps worked, the canisters valves will also work!

Let’s just wait and see what will happenduring our Range flight! 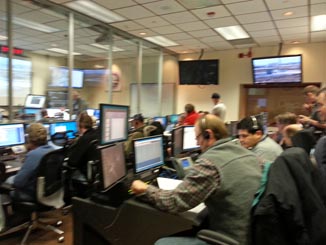 ATTREXteam at the Global Hawk Operation Center during CST. Roger (front row 3rdsit from left to right) keeping an eye on AWAS computer during CST. 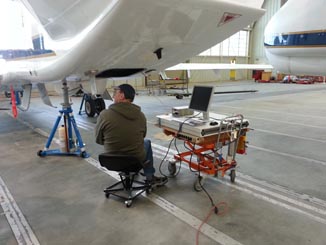 Rogergetting ready to collect the CST data from our instrument computer inside theaircraft.

I’m so excited;tomorrow will be our first time in the air. So, today we checked our instrumentone more time.  In our pre-flight, wecheck all bolts and electrical connections in our instrument (of course, wedon’t want the instrument to jump around during the flight).  We also set up the instrument computer insidethe aircraft, and pump the inlet to verify that there are not leaks.  The procedure takes like 45 min.

Rich and Roger werewith me during the pre-flight (I believe six eyes are better than two). Ipersonally can’t wait for tomorrow’s Range flight.  It would be a short flight (5 or 6 hours),but it will be the opportunity that I was waiting for. I will finally collectsome samples!!! 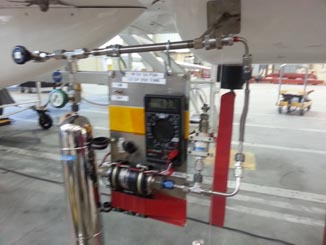 Our “home made” device to check the inletduring Pre-flight.

Today I woke up around3:40am to be ready to pick up Roger at 4:40 am (we had to be at the Global Hawkoperation Center at 5:00 am) Flight was scheduled to take off at 7:00 am.  Once we got to the Global Hawk we noticedsomething strange…not all the pilots were in the Flight Operation room, andthrough the screen, we just saw one person around the aircraft (there are usuallya lot of people around preparing the Global Hawk for takeoff) Thus, 5 min afterI set up my ground computer, one of the network engineers broke the news: FLIGHIS CANCELLED!…Whaaaaatttt???? But I was so ready for this flight (Bummeragain!!!), Well, it seem like the aircraft power pallet was not working and wecould not fly without that data information. Thus, the plan will be to fix thedevice and proceed with our Range flight tomorrow (same time, same place).

As Jochen (a member ofthe Mini Doas group) said: “It was a good drill”…ohh yes indeed!…now I knowhow terrible will be to wake up again at 3:00 am…but hey!, let’s  look at the bright side…did I mention howbeautiful  the sunrise is at Dryden? Hereare some pics…enjoy while I go back to sleep. 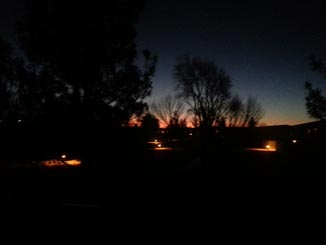 Well, here we areagain! Range Flight Day!…not too excited as I was yesterday, but ready to goONE MORE TIME.

I woke up pretty earlyin the morning (3:00 am), just to find out that the flight was delayed. Some documentationfor yesterday’s repair was needed before takeoff. Thus, while we waited,mechanics from Northrop Grumman checked the power pallet ONE MORE TIME.  After a couple of tests, they realized thatit was not working properly. They would need one hour more to complete thework. Well, after some time calculations, the Global Hawk Payload Manager (DaveFratello) realized that a delay in takeoff, would not allow us to land on time.Thus, our Range Flight was postponed ONE MORE TIME…

Hopefully we will be in the air tomorrowmorning. You know, third time’s the charm. 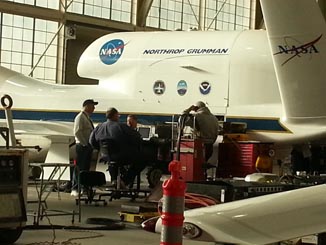 Finally, Range FlightDay!…More than excited, I just felt like I have to get this done. We havebeen trying to fly for three days, so it was time for me to get some airsamples.

While the aircraft wastaxiing, I started to feel really anxious. I was wondering if I did mypre-flight correctly. I was sure I did, but I could not help to have my doubts(I think it is normal when you feel so nervous). By the time we requested topower up our zone I decided to get rid of my fear and focus on my work. Yes,after we powered up the instrument, we started to get our “packets” through thesatellite; uffff… what a relief!

I took my first sampleapproximately 15 min after takeoff.   Ifelt really glad when I saw the plots on my computer and I noticed that Iactually drew some air into my canisters.

Since the flight wasreally short (5 hours) I had to take samples every 3 minutes in order tocollect the 90 samples that we usually collect during a science flight.However, during this flight, we also performed a power test, since the GlobalHawk managers needed to know the power consumption of each instrument. Thus, inthe middle of the flight, they decided to power down each of the aircraft zonesand take a look of the changes on currents. Unfortunately for us, ourinstrument is the one that consumes most of the power…this mean, that forsecurity issues with the aircraft, we will have to turn off AWAS every time theaircraft descends. To be honest, my team is a little concerned about it. Westill do not know how the instrument will behave with this sequential powerdown and ups. But we will figure it out in our next flight…so stay tuned. 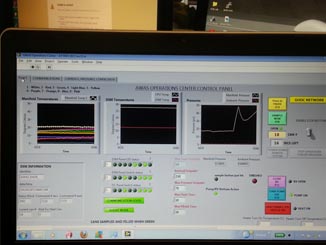 AWASground computer during sampling. See how the pressure changes (white line onthe 3rd plot from left to right) as the canister drew air. 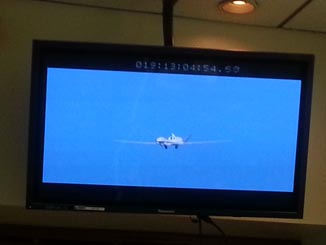 And now its time to seewhat I got!

One of the first thingswe do after each flight is to extract the data from the aircraft (part of ourpost-flight procedure). From the values collected by the aircraft computer Iverify if all canisters open and collect sample. However, there is a lot ofinformation that I need to gather from the data e.g. where the samples werecollected, how long it took to the canisters to fill up, what pressure eachcanister reached during sampling, etc. So I spend the next couple of dayslooking at the numbers and plotting the results.

During my preliminarydata analysis, I found out we missed one of the most important “packets”, theIWG1 (a text file that record aircraft information such as altitude, longitude,latitude, etc) , thus I also spend a lot of time exchanging e-mails with oursoftware engineer in order to solve this problem before our next flight.

There is a lot of workto do for the next couples of days, and this is really exciting!!!. First, weare going to test our analytical instrument (a Gas-chromatograph-MassSpectrometer) on the site. This instrument will allow us to know what compounds(and how much of them) are in the air samples collected. If the instrumentworks as we expected, we will save time (and $$), as for the followingcampaigns we won’t need to ship our canister back to Miami to performed thiswork. Thus, keep your fingers crossed (all of them!!!)