YES!, On Tuesday Feb 5around 7:52 am (PST) the Global Hawk 672 took off from Edwards Air Force Baseheading to West Pacific Ocean. I was extremely excited, my heart was beatingfast and my hands were sweating…it was amazing to see the aircraft finally in theair!

Two minutes aftertake-off, I started to warm up my instrument (pumps were on!), and 15 min laterI started to take our first sample…Yes, so far so good!!!

I kept sampling forseveral hours, but suddenly, when I was ready to draw some air inside canister33, the pressures in my instrument dropped…uh oh!!! What is going on…PANIC!!!This never happened before. I was glad that our instrument PI (principalinvestigator) was next to me, so he figured out that one of our pumps juststopped working.

Well, no more samplingfrom this flight (bummer!)…I was really disappointed, not only because I wouldmiss the fun of the sampling collection, but also, because I felt like Iletdown all my ATTREX team (In this kind of campaign, the data collection isreally valuable from other instrument teams since they can compare and validatetheir results)…but everybody kept telling me, and I knew, these things happen,and it is part of the science, which is based on precision and not onperfection (otherwise it would be so boring!).

Anyway, the worst partof this event was to know that we would have to stay in the Operation Centeruntil the end of the flight, yes,  24lovely hours doing almost nothing…just turning our instrument on (to keep it warmed)and turn it off for descending (remember, AWAS takes most of the power from theaircraft, and they need it during descending.)

Yes, what a night! Iwas only waiting for the aircraft to land to get inside it and determine thereason why my instrument had an unsuccessful flight. 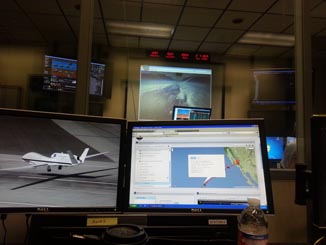 A view of my instrument screen before pumps failed

Ok, so my team hadaccess to the aircraft, and we found that indeed one of our pumps died duringflight. We took it out, opened it and found a frozen bearing. This is somethingfeasible, since temperatures at high altitudes are really cold. Thus, wereplaced the pump with a spare one (lucky that we packed it before coming toDryden) and reinstalled inside the aircraft.

To avoid furtherproblems and to verify our cold temperature suspicions, we decided to add a thermistor tomonitor the temperatures of the pumps for our next flight (yes, we scientistslove to know the reason for everything!)

Now, we are ready to goon ATTREX’s  second science flight.Preflight is done. Science meeting was held, and aircraft will be in air onSaturday, February 9th . Wish us luck! 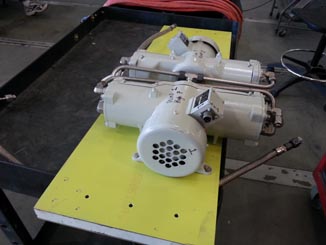 GWAS pumps outside of aircraft. (pump # 1 guilty as charge!) 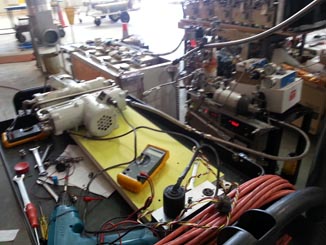 Yes, it is the weekend,but science never stops. Besides, someone told me that Global Hawk stands for Global Holiday And Weekend Killer (LoL!) and I’m starting to believe its true. Thus, are weready? Let’s Fly…

It is Saturday, Feb 9th,the Global Hawk 672 took off from Edwards Air Force Base heading to West Pacific Ocean and South to the Equator. I feltthe same excitement as I felt on Tuesday, although I was also worried about thebehavior of my pumps.

Well, this time Iwaited until the aircraft reached 40,000 ft. to start the pumps. So far sogood, the pressure reading was right, and temperatures were warmed. After 10min, I was ready to sample our first canister, so, I enabled the button tostart my sequence, but I did not see any response in my ground computer. At thesame moment I noticed we lost communication with the satellite, thus, I waiteda few minutes for it to recover.  Then,communication came back on, but my instrument was still in stand-by. Looking atanother screen I noticed there were no current values in our aircraft zone…uhoh AGAIN!!!, AWAS died one more time. But, this time was even worse since I wasnot able to collect any sample. My frustration reached a boiling point…howcould it happen? Did I miss-connect something during pre-flight? I wondered ifthe new pump thermistor working fine? Ohhh no!!! What a mess…

I decided to leave the Operation Center. I went back to the hotelwith tears in my eyes…I exercised, went out for a walk, talk with everyoneabout the problem just to try to vent my frustration, but it seems like it didnot work…I knew it was not the end of the world, but for me it was…Then Irealize what the problem was: I LOVE my job! And I care so much about it that Iwant it to do it well.

Well, here I am waitingfor the Global Hawk to land. The pressure is on. We will only have two days tofigure out what happened with our instrument and fix the problem before ourThird Science flight. Stay tuned.