Day41 to 43: A rollercoaster of emotions

After an unsuccessfulflight, we were ready to deal with the instrument to try to find a problem.

During three days I wasin a circle of happiness and disappointments. We performed several tests withour instrument which sometimes it worked fine, sometimes it crashed. We alsofelt the pressure of having our instrument ready in two days, just before ournext flight. So it was not the best way to start our week.

To summarize ourjourney, we took some parts out of the aircraft (computer, connections, andcontrol box) and all of them worked fine by themselves.  Just to play it safe, we decided to change theaircraft computer, assemble the instrument again and test it with an externalpower supply. The instrument also worked fine, but once we put the wholeinstrument back to the aircraft it failed. At this point, we figured outsomething could be wrong with the aircraft power, so we change our power zoneto another channel and the instrument performed well. Yes! That night I went tobed confident that the problem was solved.

The next day we triedto take a sample with our instrument just to prove that everything was in goodshape. However, the instrument failed when it was trying to open canister #1.

After several attemptsto determine where the problem was, we decided to jump canister # 1 and try tostart sample with canister #2. It looked like a miracle! The instrument worked.We kept going on testing the other canister, until we reached canister #11 andone more time the instrument died. We saw the same behavior for canister #31,and #41. So, something was wrong with the connections for the first canister ofeach module. One of our engineers checked the wires inside of the canisterconnections and found the problem: An electrical short with the connectorbackshell. YAY!!!! We fixed the connection and solved the problem for good. 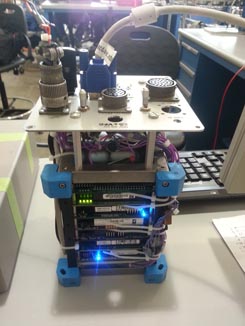 A look of GWAS computer outside of the aircraft

Here we are, February14th (Happy V-day!) around 9:48 am (PST) the Global Hawk 672 tookoff from Edwards Air Force Base heading to south of Hawaii. I have to confess,I was scared…would my instrument finally work and collect the 90 canisters weneed? Wow, I suffered the whole flight, I was sending the commands to collectour samples, but every time I pressed a button I felt like my heart stopped fora second. It wasn’t until I collected sample canister # 71 when I felt kind ofrelief (of course I was also tired. I was up for 19 hours straight and it wastime for me to go back to the hotel). Elliot kept working with the instrumentuntil the Global Hawk landed.  At thatpoint we got our 90 canister filled with air and ready for analysis. Yes, GWASfinally worked and we ROCKED! Great job GWAS team! I’m so proud of  working with you. I’m finally smiling again. 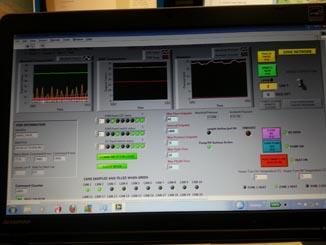 GWAS computer finally in action during a sample collection

Day46 and 48: Post-Flight, Data analysis and a well deserved break

This is exciting! I’mfinally looking at some numbers. Tons of numbers that provide temperatures, andpressure readings, times and locations of each sample collection. It is alot ofwork, but I never felt so happy. I also took the canister out of the aircraftand sent them to the lab for further analysis. Yes, what a great weekend.Besides, there was a programmed power outrage at Dryden so my weekend will be along one. I’m not only planning to take a look at this data, but I’m alsoplanning to go outside of base and have some fun with other members of ATTREXteam. First stop hiking at Tehachapi trail, then a trip to Sequoia National Park.  See you next week!