After a very nice breakwe are ready to keep working and preparing our instrument for our fourthscience flight. Once I finished our pre-flight, I needed to figure out ourflight plan for sampling. This plan is based on the information provided by ourscience team, who look at the weather conditions prior to each flight. Lookingat the flight path provided by the science team I thought about how much fun Iwould have on this flight. They planned 13 consecutives vertical profiles (ordives) which would mean to turn off GWAS before each descent. It was alsochallenging to plan how many samples we should collect during every ascent. So,after a couple of hours I came out with a good plan: collect 5 to 6 samplesduring ascent and just a few (3 to 4) at cruise altitude. In this way we couldhave a better look at the chemical composition of the vertical structure of ouratmosphere.

So, here we are,February 21th around 6:47 am (PST) the Global Hawk 672 took off fromEdwards Air Force Base heading to south of the equator for the second time. I’mnot going to lie, I was still nervous about the behavior of GWAS, but after ourfirst dive and noticed how GWAS recovered from its first power down, I feltmore relaxed. Besides, this time I took the later shift (from midnight untilthe aircraft landed) so I did not have to deal with the communication lostissues and the blind sampling strategy.

After 24.5 hours offlight the Global Hawk finally landed. Three hours later we were able to takethe canister out, collect the data from the aircraft computer and put the newset of canister to have them ready for pre-flight. 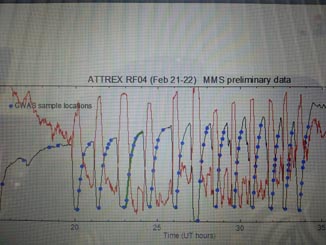 Day53: A visit from the students of PalmdaleAerospace AcademyMiddle School

Today, we hosted anevent for 99 Middle School students from the Palmdale AerospaceAcademy. Without a doubt,another of my FAVORITE experiences. How fun it was to explain to these kids howmy instrument works. It was not that easy, because I think I am used to using atechnical vocabulary for this, but I finally found the right words and Ibelieved they got the idea.

Even though they still have time to figure out whatcareer path to follow, many of them already know what they want to be. This isreally encouraging for our scientific community. It is nice to know that futuregenerations are already attracted by science. I wish them the best for theirfuture. Keep working hard kids. Remember that society makes progress by havinga skilled and creative work force.

Thanks for coming to Dryden. 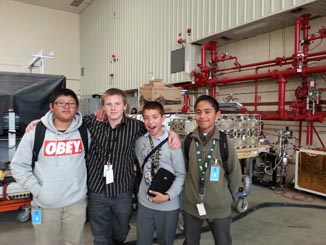 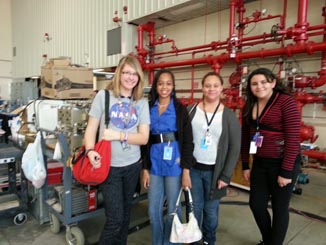 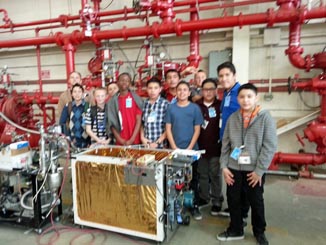