I am out here in Palmdale, CA, not for a SOFIA flight (yes Iknow that’s where most people’s interest peaks) but for a critical step calledline-ops, or operations on the flight line. Essentially we are going throughexactly what we plan to while the plane is at altitude and work on end-to-enddata testing, assessing observation timing, and communication, both among thedifferent people needed to complete the observation and also between we humansand the highly complex software subsystems.

Being on SOFIA is not like flying on a normal 747 jet. Ihope from the various photos in this blog entry and others, you’ll see it’s got“other things” like computer racks, a whole data collection and archivingserver farm on board (the MCCS), conference tables, and various electricalpanels needing access for maintenance or operation. It’s got airline seats(with the normal seatbelts) for takeoff and landing and places to store your laptopbags, but the similarities end there.

So last night we got through some key tests. We did a pupilcheck (to optimize alignment of the FORCAST instrument to the telescope). Nextwere a series of inspections of the telescope boresight (telescope centered ona star) and how that appeared on all the imaging (all filters) and spectroscopy(for all grism and slit combinations) modes. We learned we had a systematicoffset in our slits, but we updated the .ini file to address this. Then we didsome testing of the basic modes. We tested chop-nod-dither in the SIRF and ERFcoordinates. SIRF=Science Instrument Reference Frame (rows & columns on thedetector array). ERF=Equatorial Reference Frame (RA/DEC on the sky). There isalso a third coordinate system, the TARF=Telescope Assembly Reference Frame (elevation,x-elevationangles). Yes, astronomers love their coordinate systems.

Below is a photo of one of the chop-nod tests, on a bright targetstar. It’s chop-nod-match mode. Left is the Science Instrument Console withquick look software showing a reduced subtracted image (you see the positiveand negative star images). The right image shows a series of display for thetelescope guide camera and telescope display.

With the remaining hours for this night, we started probingthe space of the chopping throw vs. angle. Below is an example of a large chopthat was bumping up against a hardstop of the secondary, so we spent the restof the night investigating that issue. The scale bar on the lower left of thatguide star camera image is 1 arc minute. 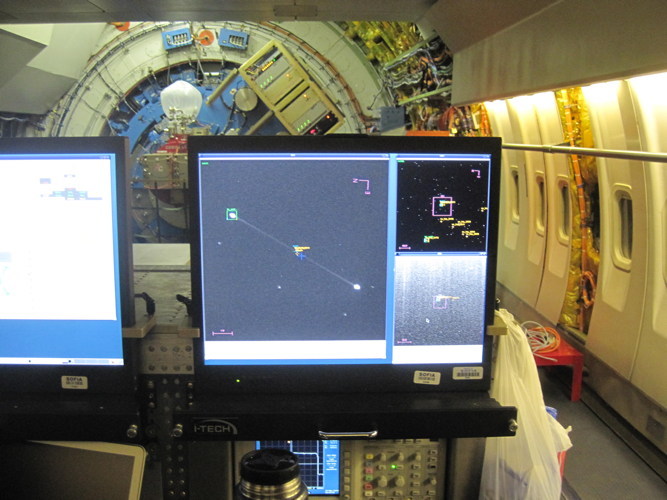 The telescope door was closed at 0500h. Sunrise was at0545h. We’ll regroup later tonight to address the series of tests for tonight.There will be a crew briefing at 2130h to assess readiness for tonight.

Oh, surprise to me, we had internet on lineops, soI was tweeting away in near-real time we did our testing and I also got someIDL coding done for the pipeline end-2-end tests.