Note: The pictures in this blog are taken from a recent line operations (when SOFIA is not in flight, but being operated on the runway) on May 23, 2013. As the program is in its iterative operations phase, these pictures capture the inside of SOFIA on this date. There will be additional preparations to enable the required safe readiness for the flights, the first set for May 30th.

At one level SOFIA is quite simple: you want to point the telescope at for target, hold there on the instrument sensor array for a set amount of time, maybe repeat the observation to allow for better signal-to-noise, and then move on to the next target. At another level, SOFIA is quite complicated as you have a moving observatory (in several degrees of freedom, i.e., forward, left, right) that is trying to target, “peak up” and stay on target for several minutes by which the observatory and/or the target has moved enough.

Mission Director: He/she is responsible for ensuring the flight meets the success criteria and is safe. They run the readiness reviews and summary the milestones for the flight campaigns. They also make decisions if needed to deviate from plan. They keep track of how well we are executing the plan.

The Flight Planner: On the plane he/she sits next to the Mission Director. Lots of work is done ahead of the actual flights to map out an optimized series of “flight legs” to maximize the time spent on target. As the telescope has a fixed position within the aircraft (aft-port), a leg towards the West (in the Northern Hemisphere) means the sky target is in the south; a leg towards the North means the sky target is in the west, etc. When SOFIA flies in the Southern Hemisphere, this gets reversed.

The Telescope Operators. Sitting close to the telescope, they monitor the telescope set-up and operations and real-time interfaces with the science instrument. Each science instrument will have different requests for the telescope assembly. They also perform the Line Of Sight rewinds periodically. Normally this is scoped out in advance but this is envisioned to be a manual operation performed with agreement the Instrument Scientist’s okay. For example, you don’t want to interrupted an observation, so you are watching the clock and the angles in real time to know when this activity is needed. 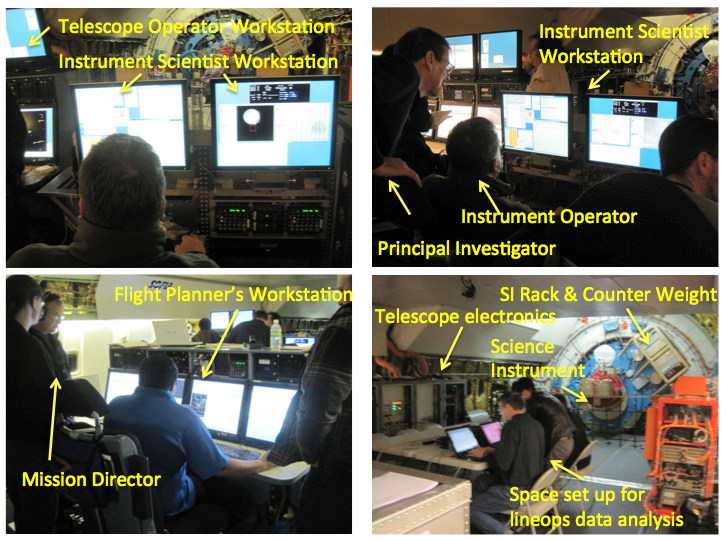 There is also a lead for the MCCS, the Mission Controls and Communication System, to supervise the performance of that critical subsystem. This software controls the communication between the science instrument and telescope as well as all the archiving of any data taken during the line ops or flight.

There is the Science Team who is on board for the in-real-time data reduction and assessment, in case an observation needs to be redone again or done differently,  a principal investigator who decides the priorities of the science observations for the flight and directs the science team and  two pilots and a flight engineer for flying the aircraft.

Finally, there is space allocated for ride-along teachers and other guests who can participate in SOFIA science.

2 thoughts on “Who's Sitting in the Driving Seat when you Fly the Infrared Friendly Skies?”