I’ve just completed my first flight on the StratosphericObservatory for Infrared Astronomy, SOFIA. Wow. What an interesting experience.I’ll break down my comments on this first flight into several shorter blogs.

When I awoke late morning (as I was trying to get onto anight shift), I obtained the list of targets planned for tonight’s flight. Weare still commissioning these “modes” on SOFIA so we chose bright, standardobjects that have been observed regularly by other instruments over the years.

Tonight’s targets were R Leo (a red giant star), NGC7027 (aplanetary nebula), alpha Boo (also known as Arcturus, a K1.5 IIIpe,orange giant star), R Cass (M-type, red giant variable star of MiraCet type) and T Mic (a M7-III giant, semi-regular pulsating star). Thetargets were taken from a list of calibrators we assembled and chosen becausethey were visible to a USA-domestic flight plan for SOFIA for the middle ofJune. If we flew at another time, we would have used other similar typeobjects. But these five objects would be our guides on this flight.

With the target list came a list of the specific measurementswe planned to make on each target. We’ve had to deviate from the original planI helped write months ago, only because the two previous flights had been cutshort. So this revised plan tackled the largest holes we needed to address.

At 5:25pm local time, I attended the Crew Briefing. Here theMission Director Charlie Kaminski did a roll call of all the people to flyaboard SOFIA tonight. There were 5 staff (pilot, co-pilot, flight engineer andtwo safety techs), three telescope operators (only two are needed, and one wasin training), the FORCAST science instrument support team (for both imaging andgrism modes, about 9 of us), Dana Bachman (SOFIA EPO lead) and 4 SOFIA AirborneAmbassadors, Beth Hagenauer (NASA Dryden PAO) who was shepherding a televisioncrew (about 4-5 people), Tom Rolling (NASA Ames) who ran an EMI test betweenhis water vapor monitor facility and the FORCAST instrument, the support stafffor the on-board MCCS system, and the Mission Director and Flight Planner. Allin all, thee were about 30 folks on this flight, a complement typical for theseearly flights where lots of activities are occurring simultaneously.

Next we had a briefing about the weather, with emphasis onexpected areas of turbulence. Granted it’s never clear when you will hit unevenair, but it was a good mental exercise to think through each flight leg to seewhat might get dropped if the turbulence got too rough to control thetelescope. So we were expecting to have “weather” when we flew over northernMontana, Nebraska and Missouri due to the summer thunderstorms. The timelinefrom doors closed to data transfer at end of flight was discussed. And each keysystem: aircraft, telescope, and science instrument, reported on theirreadiness.

Upon inspection of the flight plan, it was remarked “You areall going into Canada” and we all inspected that yes the transition from Leg 8to Leg 9 did cross at the Montana/Canadian boarder.  In flight, the Flight Planner actually announcedaround 12am PDT (07:00 UTC) when SOFIA entered into international airspace,even if just for a few minutes. That was very cool, eh? 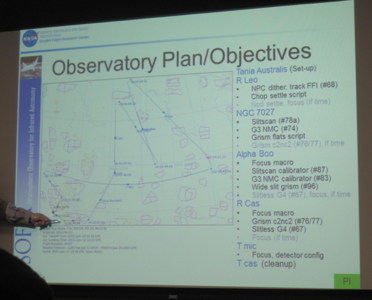 A SOFIA flight is highly orchestrated. For this particularflight, as we were using specific targets for calibration, we dedicated singlelegs to one object.  Within minutes afterthe crew briefing ended, it was time to walk over to SOFIA, which had beenmoved out onto the tarmac, and climb aboard! 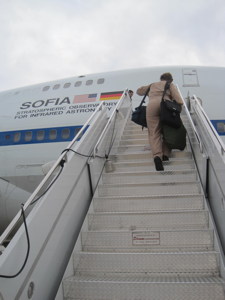 We board SOFIA from the taxi-way. The plane had beenrefueled and ready to go hours before our take-off.

Oh, a special surprise! A friend from a leadershipdevelopment program we did together about 3 years ago (my, has time flown!), EdTeets, a meteorologist & atmospheric physicist from NASA Dryden, came togive the pre-flight weather briefing. That was awesome Ed! 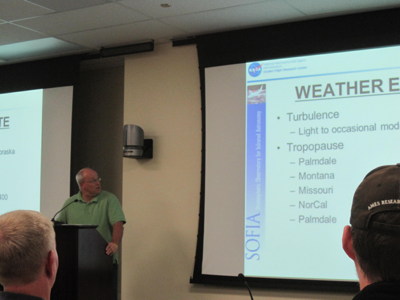 My friend Ed Teets, atmospheric physicist, from NASADryden given the weather briefing for SOFIA Flight #105.