After boarding, we had some time before the doors closed. Asafety briefing was held. Upon entry to SOFIA, one objective, as this was arelatively “full flight” with 30 people, was to stake out a seat for take off(a comment was even made of the ‘Southwest Airlines’ way). Seats are scatteredabout the airplane for specific purposes and prior to this flight, mycolleagues and I had worked out our seating. We could only send one representative to the “conference table” seatingarea, so Martin Garay (a student at Ithaca College) and I were sentto business class, while Luke Keller (our grism lead, astronomy professor atIthaca College) sat at the “conference table” midway along thetelescope deck. 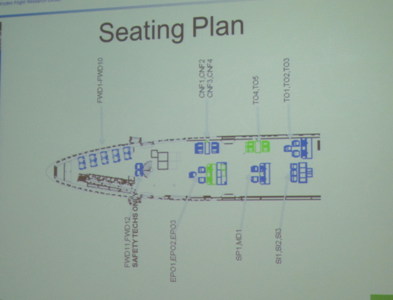 Sketch of the seatingon the telescope deck on SOFIA. There are additional seats on the upper deck.

During the prep for takeoff, I took the moment to inspectthe on-board safety information card. It re-iterated what we learned in egresstraining and what was described as we boarded. Indeed the inside of this 747SPis very different from your normal airline experience and being aware of yoursurroundings wherever you are is important. 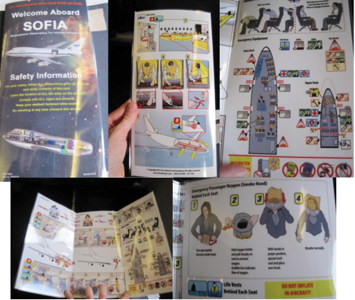 The engines started at 715pm PDT (local time), and we tookoff around 7:27pm PDT. It was a good 50 seconds for takeoff. And essentially, itfelt like a normal jet takeoff sitting up in the business class section.However, unlike a normal airline ride, within a few minutes we were allowed toget out of our seats. It was just so surreal to be walking down/up the planeduring the descent. It sort of felt wrong, as we are accustomed to the strict ruleson commercial aircraft, but it was so important to use any leg designed tobring the aircraft to the 40,000 ft science altitude, to do non-science thingslike setting up computers and testing connections between the systems. On thisflight, every second counts! And that theme was certainly reiterated throughoutthe night.

And at 825pm PDT, the telescope door opened! Within minutes,Joe Adams, the FORCAST lead instrument scientist, had started his first scriptto check out the detector frame rate settings. 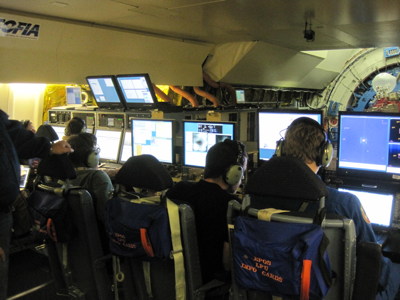 One of the first data acquisitionsof SOFIA Flight #105. Target is R Leo.

We hit pockets of turbulence during ascent and near the“weather” areas we had been warned about, and although the aircraft seemed tobe moving up/down/sideways, the telescope moved as well. It was mesmerizing tosee the FORCAST instrument and its counter weight moving about the cabin andyet the position of the star in the telescope guide camera was “rock solid.”Indeed, contents shifting during flight, but not this telescope! Two timesduring the light, the turbulence got bad enough that we had to return to ourseats and the telescope was “secured,” but both episodes lasted less than 10minutes.

From Jim Debuzier’s (the lead instrument scientist) log, hewrote: “09:45 [UTC] Turbulence like a roller coaster. Everyone’s sitting(whether they wanted to or not), and the telescope is in local. Riding it outuntil we can start observing again…)”

What was fascinating was that according to the missionmanager, we probably lost about an hour due to turbulence. We had to sit downabout 2x during the flight for a period of 10-15 minutes. I lost all track ofdurations of things, as I was focused on what data we lost by these unexpectedinterruptions. But each time we faced turbulence, we just took it in stride.Around 08:20 UTC (1:20am PDT) we also needed to do small flight diversion fromour Leg #9 to avoid some baby tornado clouds. This time the timing was good aswe were doing some calibration flats which did not need a target so we couldstill take data during the diversion.

You can see what the actual flight path was by visiting http://flightaware.com and searching onNASA747. 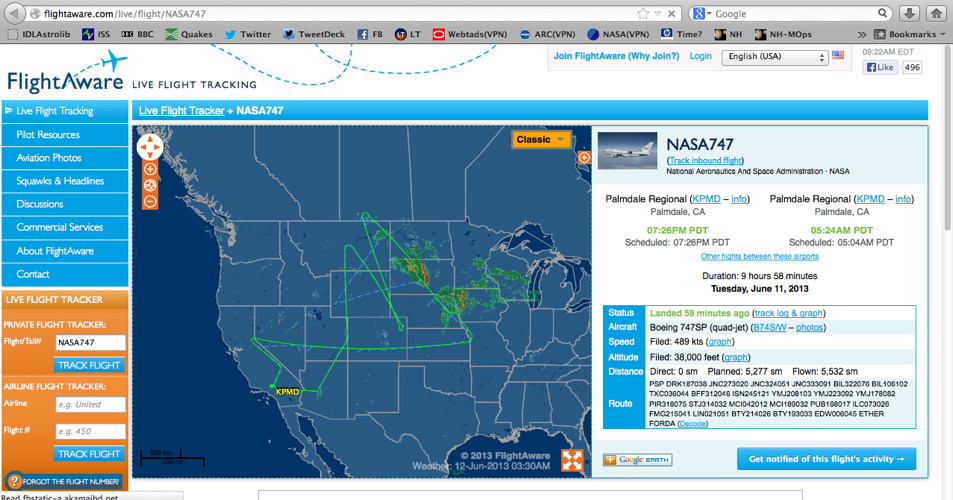 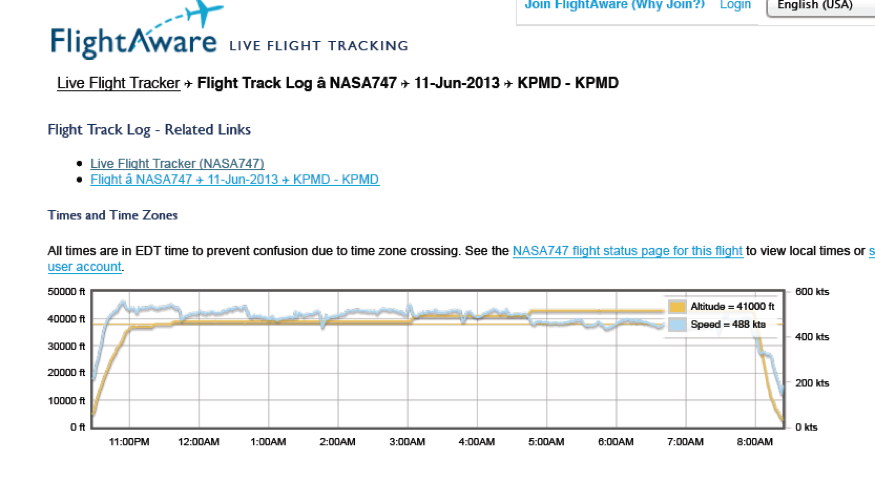 Screengrab of loggedSOFIA altitude and speed for Flight#105 Jun 11-12, 2013 from Flightaware.com

One of the passengers,a member of the DAOF staff, carrying his EPOS, the khaki-green pouch on ashoulder strap.