On Leg #7, between 9:45pm PDT (04:45 UTC) and 10:49pm PDT(05:49 UTC), the pilots flew SOFIA along a leg going southeast from middleMontana to northeast Colorado. Our target was NGC7027, a planetary nebula. Ithas a distinctive ring shape, and a frequent wavelength calibrator for infraredinstruments due to having very strong emission lines.

Jim Debuizer, the USRA FORCAST Instrument Scientist, andtest lead for these commissioning flights, affectionately called it the “thebig glazed donut in the sky.” Perhaps he was getting a big peckish?

NGC7027 is a young, and rather dense planetary nebula. It’s notparticularly large on the sky, with its brightest region measuring about ~8arcseconds across in the optical. It’s located about 3000 light years away inthe constellation Cygnus (coordinates 21h7m1.7s RA, +42d14m11sDec). Most planetary nebulae are more extended, covering several arcminutes onthe sky. (As a calibrator note, for those who don’t speak arcseconds: the fullmoon is 30 arcminutes or ½ degree on the sky; 1 arcsec is 1/60th ofan arminute.) SOFIA’s FORCAST mid-IR instrument has roughly a platescale of0.75 arcsec/pixel. Thus, NGC7027 would appear to be ~11 pixels in diameter onthe FORCAST detector. For our grism spectroscopy, we are testing 2.4 arcsec(3.2 pixel) and 4.7 arcsec (6.2 pixel) wide slits, so NGC7027 would essentially“fill our slit.” Thus it would not be a great flux calibrator object as we’dhave “slit losses” but it’s infrared spectrum has well-identified andwell-spaced emission features that would be useful for our wavelength calibrationtask. 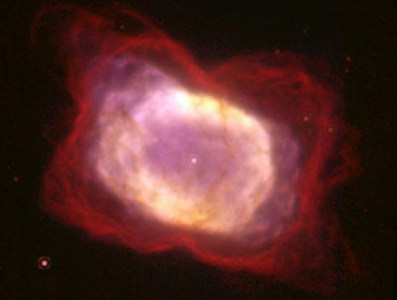 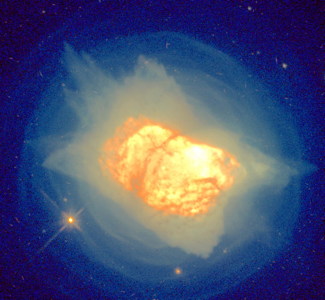 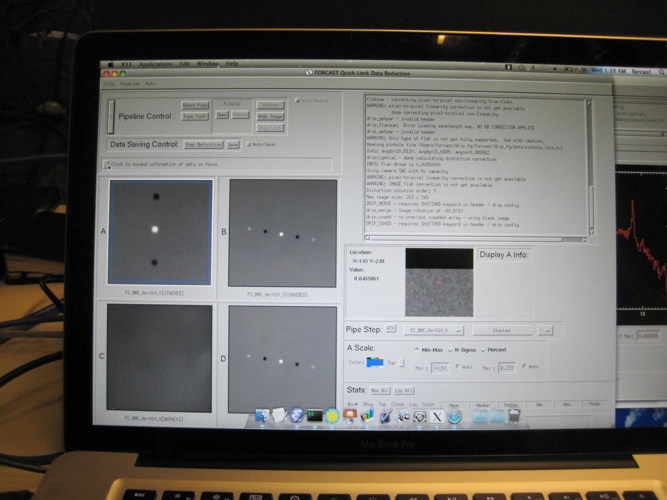 Above is an image of our quicklook pipeline as Iwas processing an acquisition narrowband image (at 11.1um) on SOFIA Flight#105. We used this image to confirm we placedthe target in the slit. The team was also testing out SLITSCAN, anobservational mode that would be used on SOFIA when observing an extendedobject using the grism suite. The positive and negative images are the resultof the chop-nod observing technique used to remove the background.

For moreinformation about chopping & nodding on SOFIA, see my earlier post at https://blogs.nasa.gov/cm/blog/mission-ames/posts/post_1369351626283.html

Above is an image of our quicklook pipeline as I wasprocessing our R~300 8-14um spectra (not fully-calibrated). We still need toremove the atmosphere. The strongest atmosphere issue are ozone absorptions at~9.5 microns. The emission features of the nebula are shown in our spectra. Ifyou look closely at the 2D spectra on the left, you can see we aligned the slitto capture two edges of the disk, showing as two bright lines on the edges ofthe slit.

We were observing this object with our grism spectra suite. Wetook data on this same object last week and started to use it as a sanity checkon our in-progress flux calibration in addition to a wavelength calibration. Belowis an overlay of two of our grisms (5-8um and 8-14um) with the spectra ofNGC7027 as observed by ISO years ago. We now have spectra to cover 17-28um and28-34um, and are working on their respective calibration steps. We are usinganother well-studied source, Arcturus (AlphaBoo) as our flux calibrator. Thereason why the 8-14um spectra in the image below is off is because the data setwe took was near-saturation so our various conversions were not optimal. Werepeated the observations at lower exposure to repeat the exercise. 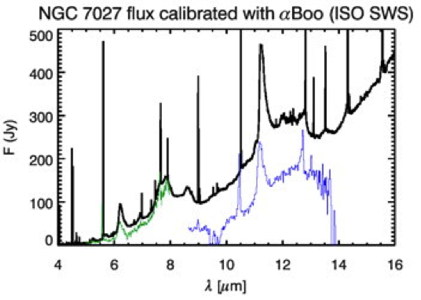 Our working comparisonof our short wavelength grism suite data of NGC7027 with previously publishedobservations by the Infrared Space Observatory.

It was unfortunate that during this leg (Leg #7) that we hitturbulence and had to stop observing for a few minutes. We got slitscan(observational technique for extended objects) observation in (the goal of theleg), but sadly did not a requested long wavelength grism spectra of thisobject. However, we obtained other spectra on other objects using themissed-grisms later in the evening. It’s all going to be able piecing togetherthe puzzle now.