So between takeoff at 7:25pm PDT and landing at 5:25am PDT,the flight planners had to keep us literally on track. There is an official flight plan that the pilots will follow and which has been worked out ahead of time with FAA air traffic control. It’s the result of a complex optimization strategy to calculate where one’s targets are in the sky and visible by the SOFIA telescope at given times and locations of this moving airborne platform,along with ensuring not entering no-fly areas, and of length and elevation appropriate for the amount of fuel on board to enable a 10 hour flight, with about 8 hrs at the desired 40,000 ft elevation. In addition, they need to look at seasonal weather patterns, and then on the final iteration of the flight plan, they take into account the most recent weather predictions. In ground-based astronomy,you can lose time on your objects by being “clouded out.” For airborne astronomy when you are above the clouds, your only threats to observation time are weather-related, but weather of another kind.

Thus, you want to be smart to make the use of this unique facility flying in the skies getting you incredible access to the infrared wavelengths. So when our test plan was created, for each leg, we had prioritized which observations we needed to get done, our “baseline” versus observations of “the nice to have” flavor.  In case we lost time, we aimed to achieve that “baseline.” In case we were more efficient with setting up each observation than originally predicted, we might have more time to tackle the “nice to haves.” In ground-based astronomy where you don’t have such a tight timeline, unless of course the sun is rising or your object has gone below the horizon, you could easily extend your observations by a few minutes or so. For SOFIA, they do keep the leg duration strictly flown as planned with little room for time extension.

For Flight#105, we had 13 legs, of which legs #6-12 were“science.” Legs 1-5 were the ascent legs to get up and out of the LA congested airspace and get us to altitude.  Leg 13was the final descent back to Palmdale, CA. As I mentioned in the previous blog, within a few minutes after takeoff, even while we were still ascending at an angle, we were allowed to get up and walk about the aircraft. We used this time to get our computers and laptops all set up. The telescope operators got the telescope (the door is closed) up and running ready to go when the conditions allowed for the door to open. Actually on flight #105, we had to delay the door opening until we got above some high-altitude cirrus clouds, but it did not impact significantly the post-door opening telescope checkout in time for when we got on our 1st target. 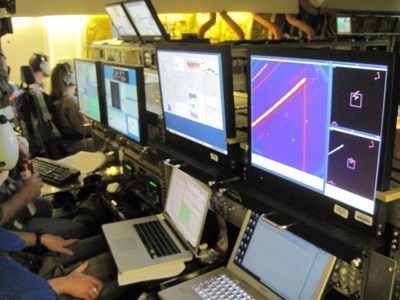 We stayed all configured even as SOFIA turned between legs.You can see the computer screen on the right is the telescope guide cameras and the streaks are just stars going through the FOV.

The Flight Planner’s voice was a welcome reminder of the essence of time management. She did not speak that often, but often enough to put in reminders “30 minutes left on leg, 10 minutes left on leg,” etc. So when we started to deviate slightly from the observing plan because the script did not work, or the telescope lost lock on the target, etc. and you found yourself easily losing track of time, she grounded us back to the timeline. Our lead instrument scientist, Jim De Buizer, had to make calls on the fly to get back on track to accomplish the tests per leg. It’s a tough job to stay flexible but creative with how to get things done. And when you lose 10 minutes or so to turbulence, you have to re-insert yourself into the observation timeline to keep ticking off the tasks.

The Flight Planner was also in constant communication with the pilots who were talking with air traffic control to look at flight conditions. So another task she did was ask us about some possible real-time deviations for the next leg to “fly around weather” but still stay in the same area of the sky so that the observations were not affected (significantly). The net result is that you might lose some observation time up front at the trade of not having interrupted observing downstream. That was an interesting trade to see happen. And yes, on SOFIA Flight #105, when we were over the Dakotas and Kansas we had to do two deviations due to weather, but we managed to still get most of the data for those legs as a result. Had we not deviated, we most likely may have lost the entire leg’s observation. 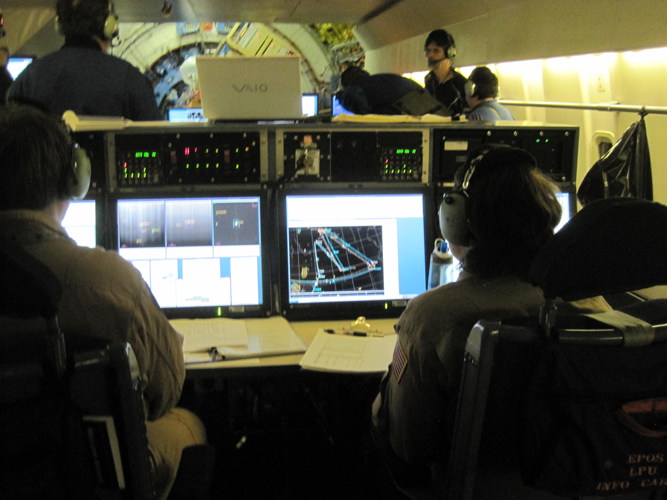 View from the Mission Director and Flight Planner’s console.

The central image shows a live view of where the aircraft at the specific time and also shows (by different colors) alternative flight trajectories in case the aircraft needs to divert for weather. Diverting due to weather happened two times on SOFIA Flight #105.

If you noticed in the pictures I posted, we are wearing headsets. There were not enough headsets for all passengers, so we traded off.The sound inside is like a typical 747 aircraft, maybe a bit on the noisier side (lots of computer racks and not much fabrics to absorb sound), but perfectly fine with ear buds. However, wearing the headsets and monitoring the channels helps immensely to know what is going on. There is no “Bleep. Please return to your seat” automated voice from above, but rather the Mission Director saying on the communication (comm) system “Guys, it’s time to sit down now.” And there is no “call-button” for assistance, you just talk where you are through the headset. 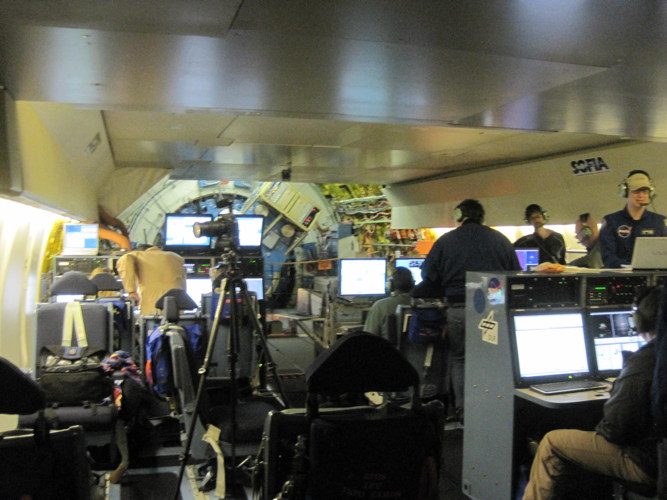 Typical view of operations during a SOFIA observation flight

Typical view of operations during a SOFIA observation flight. We’re wearing headsets to communicate between all the stations on the aircraft.

Getting back to headsets…it was quite fun, since part of the flight I was sitting at the “conference table” at mid-deck and we were just chatting with the science instrument folks who were near the telescope as if we were across the table. It was very efficient. We could stay at the “conference table” with our laptops hooked to the on-board internet doing the data analysis and report things we saw in the data to our colleagues who were more focused on trying to take the data and keep to the script schedule and interact with the telescope operators who had to do lots of telescope rewinds and target re-acquisitions.Plus, having this arrangement, kept people from crowded at the consoles. Of course, from time to time I wanted to be “at the action” and I would walk and re-plug in my headset up front if a port was open. 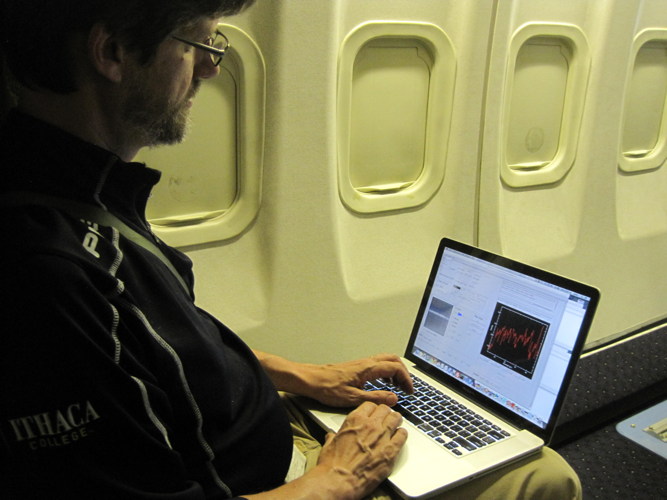 The photo above is Luke Keller from Ithaca College, sitting down with laptop, doing some grism 6 data reduction between legs. It was a good thing to share the flight with the imaging team as when they had an image intensive leg, we could escape and look at our data with our data reduction tools. 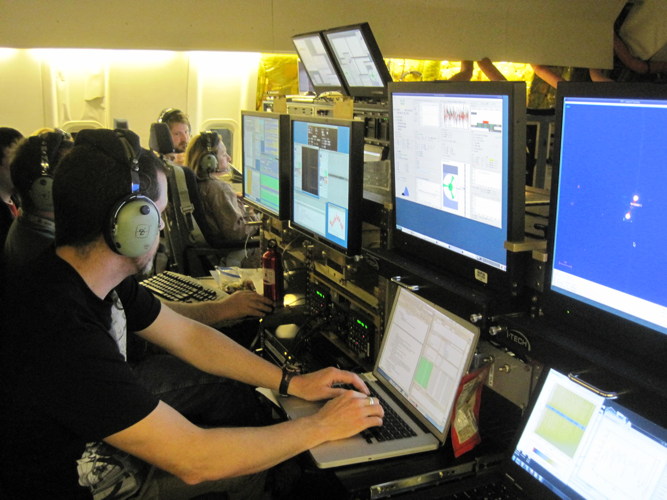 View from the science instrument consoles during an observation.

Screens from left to right are: FORCAST control,  FORCAST quick-look image display, Telescope Assembly Status Page, and the Guide cameras.In this image, we are executing a short chop of a point source.

So from our instrument scientist’s log, we had 16 tasks planned over the 6 science legs. We successfully completed 10/16, partially completed 5/16 (mainly due to lost of time from turbulence), and did not complete 1. Or about  88-90% completion rate, depending on how you count it. We’re learning as we go. We’ll use this information from this commissioning flight to improve our observing efficiency during science flights. But remember, these commissioning flights are designed to help us work out the basic modes and capabilities of the instruments and things are expected to not go as 100% as expected.

We have one more commissioning flight Thurs Jun 13th during which we will attempt to do cleanup from Tues’ flight plus address the tasks we had set for that flight (different flight plan is planned as we have different targets).