After the New Horizons’ instrument overviews on the first day at the Pluto Science Conference (Jul 22, 2013, we jumped right into Pluto in the Kuiper Belt Context.

Brett Gladman (University of British Columbia, Vancouver, Canada) started the conversation by addressing “How does Pluto fit in our understanding of the Kuiper Belt?”

But before we get into that, discussing the Kuiper belt today can be pretty complex. It was only discovered in 1992, but in the years since, over 130,000 bodies with sizes 100 km and larger have been identified (Petit et al 2011), with Pluto being the largest member.

So when we start looking at large numbers of objects, it’s time to classify. So a typical plot to describe these “populations” is shown below, where semi-major axis (distance of body from the Sun) is plotted (horizontal axis, labeled ‘a’ in units AU, where 1 AU is the distance of the Earth from the Sun, Jupiter is ~5 AU, Saturn ~10AU) versus eccentricity (value between 0 and 1 that describes how circular an orbit it, e=0 is circle, e=1 is parabola, 0<e<1 describes ovals).

And then you have your Classical, your Cold Classical, Hot Classical, Detached, Resonant, and SDO (aka Scattered Disk Objects), etc. Sometimes they group together, others are more uniform across the parameter space. 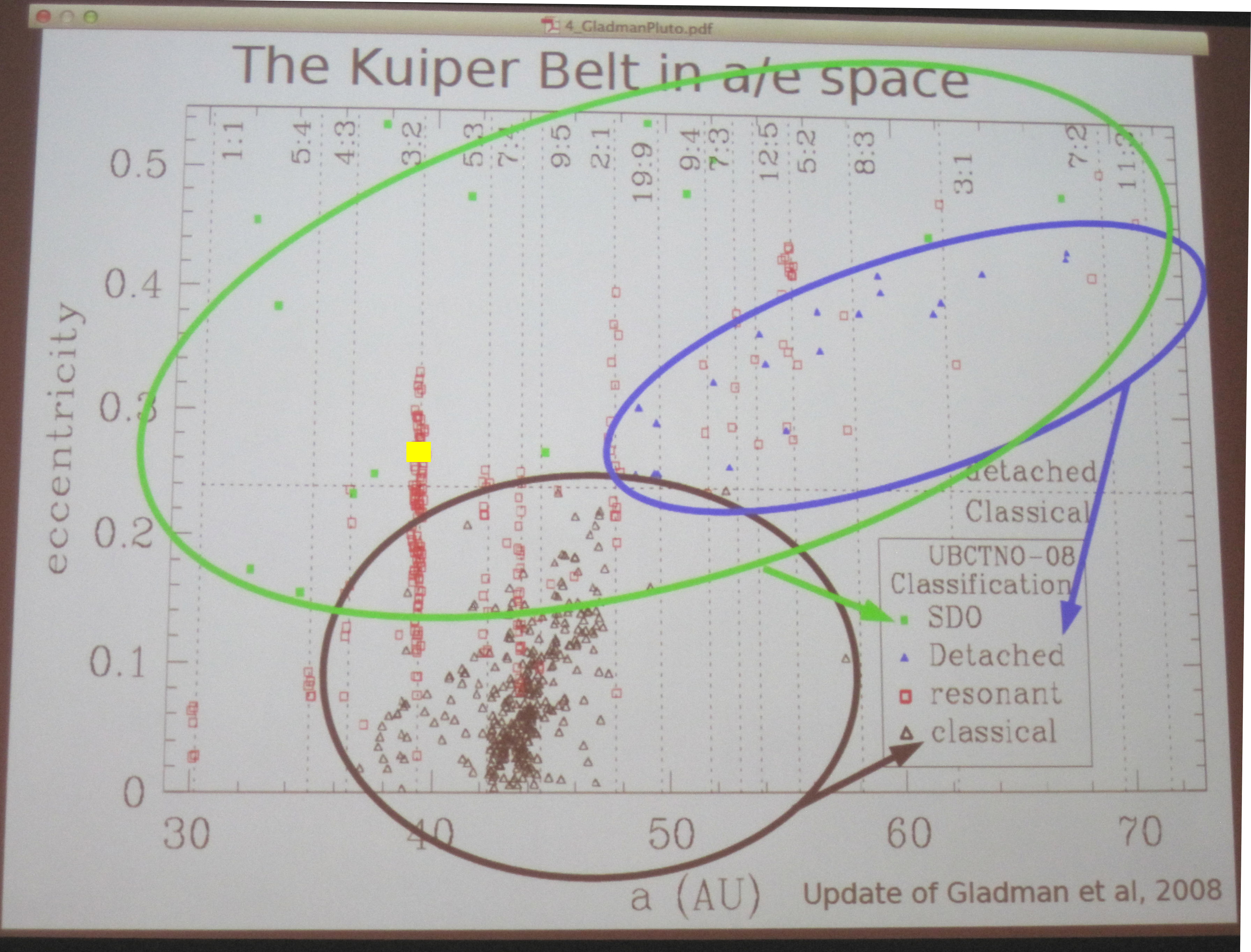 Kuiper Belt in a/e space.” Cold classical (black open triangles). Resonant Kuiper (open red square). Detached (blue triangles). Pluto is indicated with the yellow-box, it’s a Resonant, as it is in 3:2 Resonance with Neptune. This group of objects, all in 3:2 Resonance with Neptune are the “Plutinos.” (that clumping around 40 AU, red triangles, spanning over a range of e). Resonance numbers are shown at the top of the graph.

Plutinos are also a family of TNOs, Trans-Neptunian Objects, characterized by being in 3:2 mean-motion resonance with Neptune (i.e., every time Neptune makes 3 trips about the Sun, the Plutinos make 2 trips). Plutinos are the most dominant of the TNOs. Less numerous are the 1:1 objects, objects known as Trojans.

For more information about TNOs and their period relationships with Neptune https://en.wikipedia.org/wiki/Resonant_trans-Neptunian_object.

After getting down those nomenclature basics, Brett Gladman (who is also lead for a huge ground-based survey of KBOs called the Canada-France Ecliptic Plane Survey/CFEPS) discussed the strengths and pitfalls of the theories put forward to explain the formation and structure of this complex KBO menagerie.

How did Pluto get to where it is today? Two leading theories (1) Resonant sweeping of objects formed in TNO regions and (2) resonant trapping explain many things, but no published models explain those resonant structures of the Kuiper belt. And any of these models have issues with the classical and scattering disk populations as well. Theorists, better sharpen your pencils.

So he left us with questions to ponder. Is there a cold primordial Kuiper Belt with edge at 45 AU? Did Pluto likely form as one of hundreds to thousands of >1000km embryos? Did some of these become implanted into the nearby non-scattering belt? Are there others out beyond 100 AU (considered likely, but to discover them, you need to get down to 23-24th mag which is beyond the current survey capabilities until new telescopes and.or techniques come available)?

No doubt, searches for more TNOs will continue, the classification of the KB will undergo evolution, and theorists will refine their models. And New Horizons will provide a unique data set of an up-close-and-personal visit to Pluto and its companions to help constrain those models. 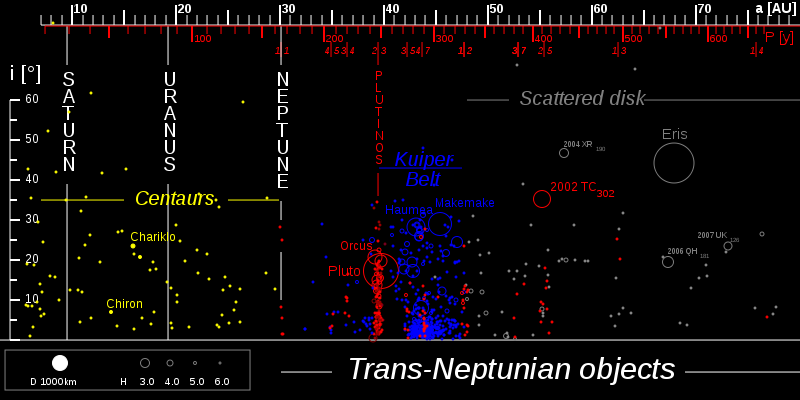 Putting Centaurs and TNOs in Context. This time plotting inclination (the degrees from the ecliptic plane) vs. semi-major axis in AU. Object sizes are reflected in the symbol sizes. Location of Saturn, Uranus and Neptune are shown. Just another way to look at that awesome & diverse Outer Solar System. From: https://en.wikipedia.org/wiki/Trans-Neptunian_object.

He stepped us through recent size distribution models from Schlichting, Fuentes & Trilling (2013) and Kenyon & Bromley (2013) where they even have some including the “collisional factor” influence on the size distribution over time periods. 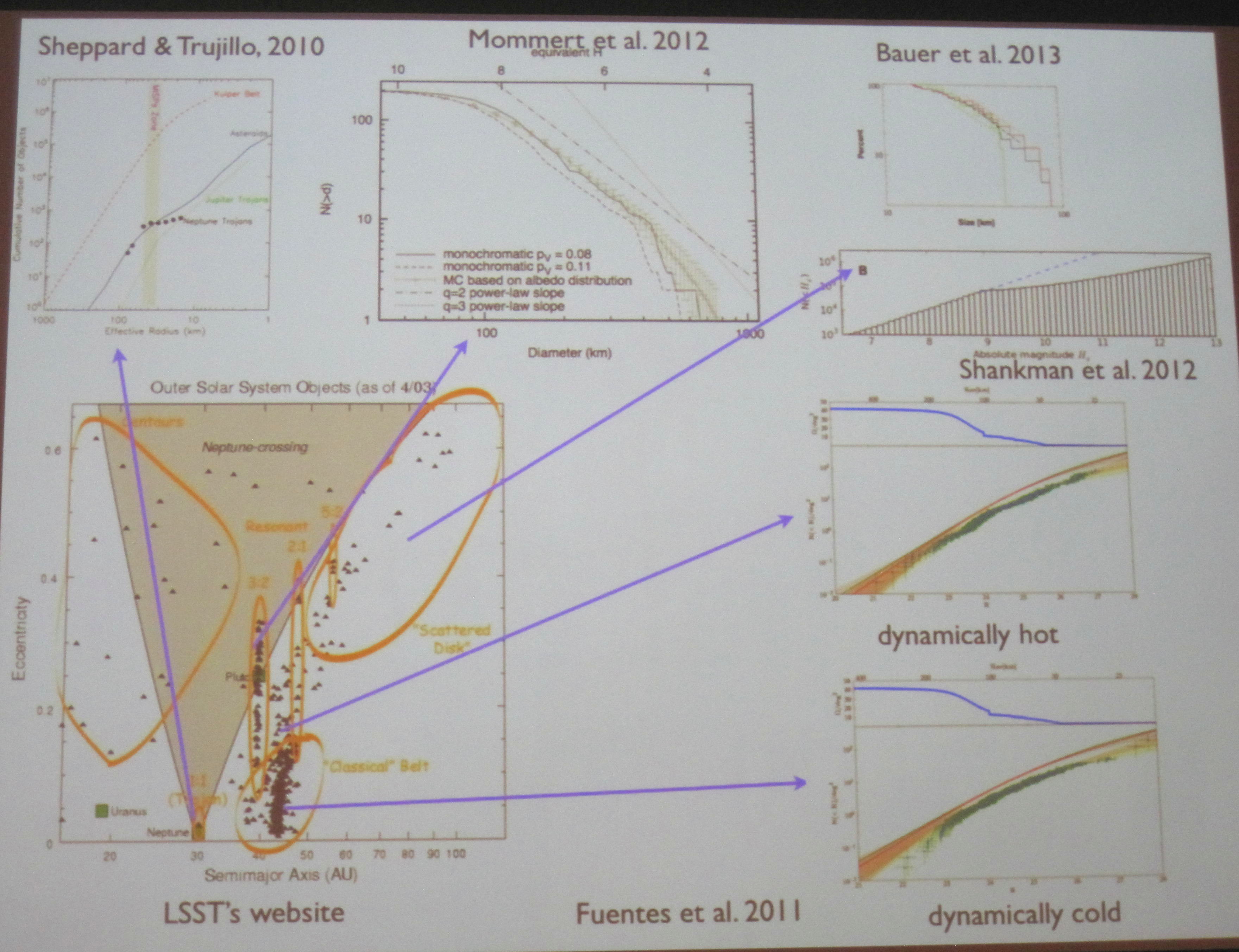 All the Size Distributions show a “rollover” around H~9, D=70km. Nesvorny et al. 2013 investigates this further. Is the break due to collisional and therefore separate the primordial from the evolved KBO populations?

Even more questions to ponder:  Can we use size distributions to evaluate primordial from the evolved KBO populations?

And then he left us with a tantalizing experiment with the New Horizons mission: If New Horizons can provide data sets enabling “crater counting,” we will be able to measure the impactors on Pluto. This can aid in understanding KBO populations, addressing specifically, formation time, timescales for surface activity, and origins of bodies like Nix & Hydra. What would a 0.1-100 km impactor size distribution look like?

Pluto, be it Prince of the Plutinos or King of the Kuiper Belt, will always remain a key part to these questions above. And data sets from New Horizons will provide many new angles to answering questions about “Where did Pluto form and why did it wind up where it is now.”