On the afternoon July 23, 2013 at the Pluto Science Conference continued, we switched gears from atmospheres to small satellites. This blog entry is about the formation theories for Pluto and Charon.

Hal Levison (SwRI) started the afternoon with a talk entitled “Unraveling the Early Dynamical Evolution of the Outer Solar system.” The “Nice Model” (Gomes, Levison, Morbidelli, Tsiganis) was devised to introduce possible models that could produce the Outer Solar System as we know it and preserve the Inner Solar System as we know it. The authors have been updating it with planets in resonances (Morbidelli et al 2007), put Pluto-objects in the disk (Levinson et al 2011), restricted the models to “save the Earth” by making sure Jupiter does not encounter an ice giant planet (Brasser et al 2009), and added a third ice giant (Nesvorny & Morbidelli 2011).

To learn more information about the Nice Model, check out a good entry at http://en.wikipedia.org/wiki/Nice_model.

So, what does this all mean for the Kuiper Belt? The Kuiper Belt is a rich structure. Observationally the sum of all the mass in the Kuiper Belt is <= 0.1 Mass_Earth.  In order to get objects the size of Pluto to grow in the timescales of our Solar System, you need a lot more mass. So we need find this missing mass. 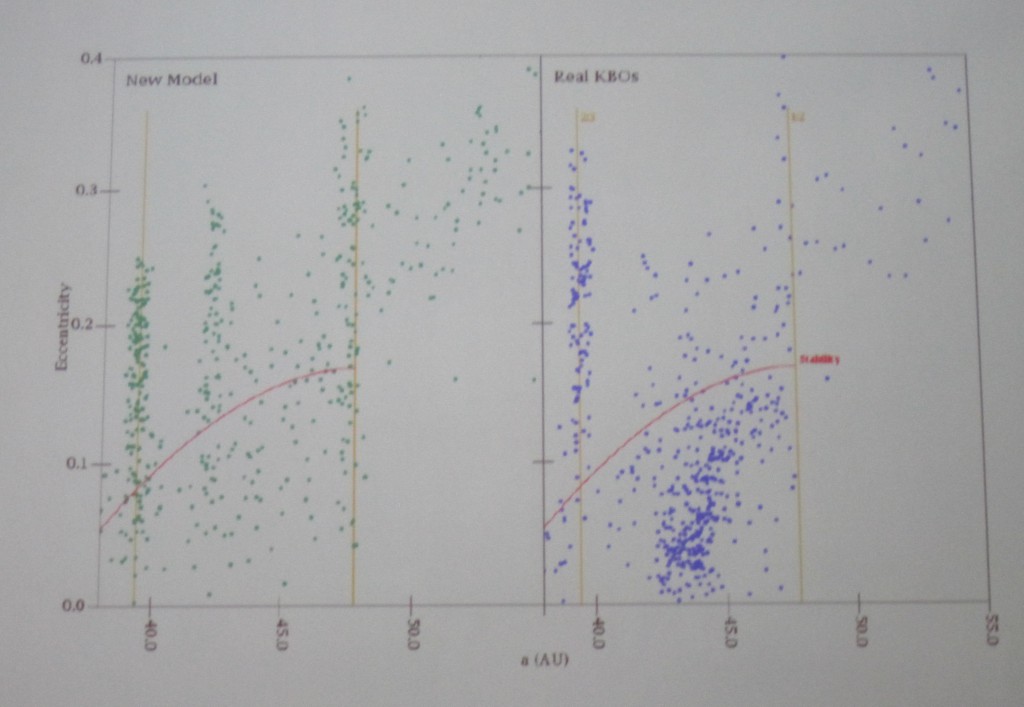 Above is a Comparison of updated 2008 Nice Model (green ) vs. Kuiper Belt Data (blue dots). It qualitatively shows similarities however it cannot reproduce the “kernel” (described in Brett Gladman’s talk from July 22nd) nor objects with high inclination (large i) nor objects in the “Cold Classical Population.”

Cold Classical Kuiper Belt Objects have orbits much like the planets; nearly circular, with an orbital eccentricity of less than 0.1, and with relatively low inclinations up to about 10° (they lie close to the plane of the Solar System rather than at an angle). They have characteristics similar to an undisturbed protoplanetary disk. Often the term ‘primordial’ is used when describing Cold Classicals. They tend to be in binaries and have “red” colors.

He then ended his talk by sharing an recent update with his work on Outer Solar System modeling, hoping to explain high inclination Kuiper Belt Object formation, by looking at the formation of Jupiter and Saturn with and without a gas disk present. Jupiter and Saturn, when they are forming, are scattering objects outward. Then if there is a gas disk present, these objects get into what is known as Kozai resonances, where bodies exchange eccentricity for inclination. As the gas disperses, a population at high inclinations in the Kuiper Belt region (30-50 AU) are caught. In the models, if you vary the outside extent of the disk, you spread out the populations. However, this is not in agreement with our solar system (we don’t see those types of objects). Their conclusion is that you needed to have the gas disk truncated and this modification of the Nice Model can explain high inclination KBOs. 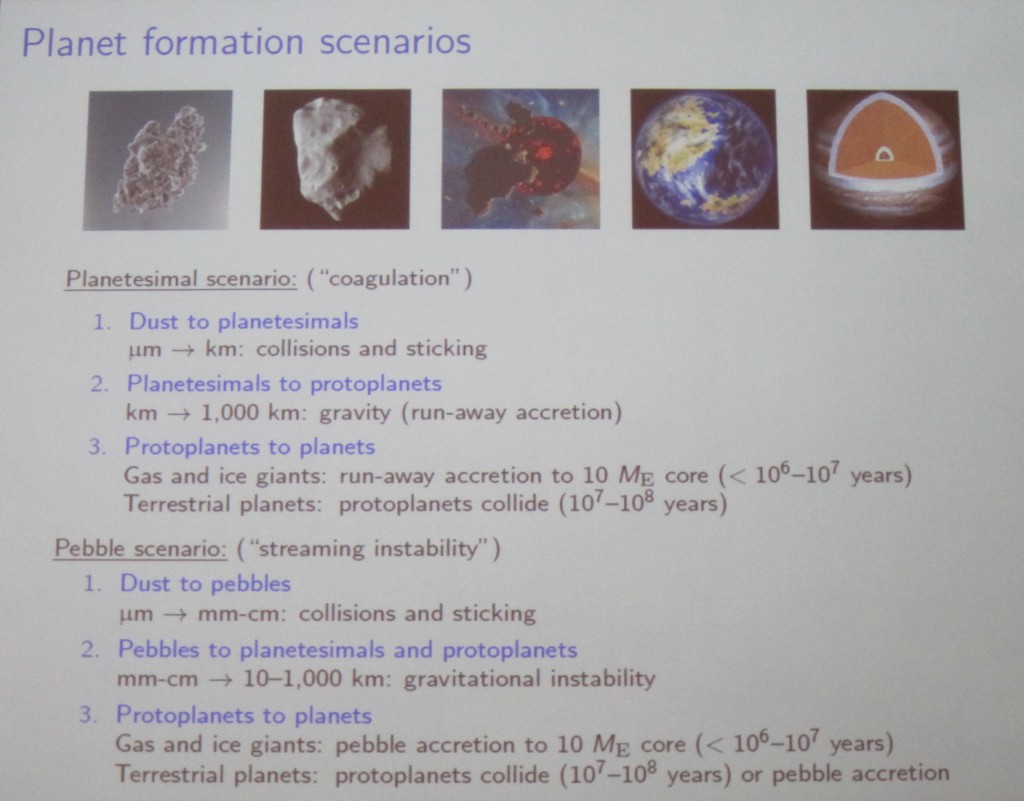 He asked, could Pluto be formed by planetesimal accretion? This will require a cold disk of km-size planetesimals (Kenyon & Bromley 2012) where a key prediction of the planetesimal accretion model gives a differential size distribution that is in agreement with observations (i.e. lots of smaller objects). But, there is a problem this this approach since to make kilometer size objects beyond 20 AU as it would taken 100 Myr which is much longer than the life-time of the gas disk (Lambrechts & Johnansen, in prep). Thus, to make a Pluto-size (few 1000s km size) object would taker longer than the age of the Solar System. (Pluto orbit is 29 AU at closest to Sun to 49 AU, furthest from Sun). However adding streaming instability can speed up the planetesimal growth timeframe.

Could Pluto have been formed by pebble accretion? Pebbles are accreted very efficiently by planetesimals (Lambrechts & Johnansen,  2012; Ormel & Jlahr 2010). This shapes the distribution (makes it steeper) and brings it more into agreement with asteroid and KBO populations.

What new data will New Horizons shed? If data from New Horizons reveals the presence of Aluminum 26, this will imply a formation age for Pluto. Formation time data can be fed back into planet-forming models, be they planetesimal or pebble accretion, and those models can be used to help explain other systems, such as observed proto-planetary disks or exoplanet systems around other stars.

Robin Canup (SwRI) talked about the “Origin of Pluto’s Satellites.” Massive Charon and four very tiny outer moons make up Pluto’s satellites. All of these satellites are co-planar (they are moving in the same plane) and prograde with respect to Pluto’s rotation (they revolve about Pluto in the same direction as Pluto’s rotation). However, Pluto’s rotation is retrograde (in the motion opposite) to its orbit.

It is thought that Charon was formed by a giant impact that could have preserved a lot of angular momentum in the system. Her models (Canup 2011) predict a grazing impact was needed to match the system angular momentum and produce a Charon-mass object. Achieving a Charon-mass object requires an extreme case, as most of them like to create a companion that is 6-8% of mass of the primary object.

She also modeled cases where there is an undifferentiated impactor, and those systems can form “intact-moons.” In many scenarios, Charon-mass objects are created. And “the Charon that was created” forms entirely from impactor material. She postulates that this is the more probable explanation for Charon’s formation.

What about the origin of the tiny moons? The models do create a disk, which has enough mass to form tiny moons. The challenge is that the disk that is made too compact compared to the current existence of Nix & Hydra. Could these moons have been transported out? But no model has been able to drive them out via “resonant transport.”

The alternative theory for the formation of the smaller moons is by capture, but it’s rather very low probability. Plus that could imply far more irregular satellites and Pluto’s smaller moons are more regular. So this opens up the path for other theories. Collisional spreading? Collisional dampening? Preferential re-accretion?

This is an active area of study.