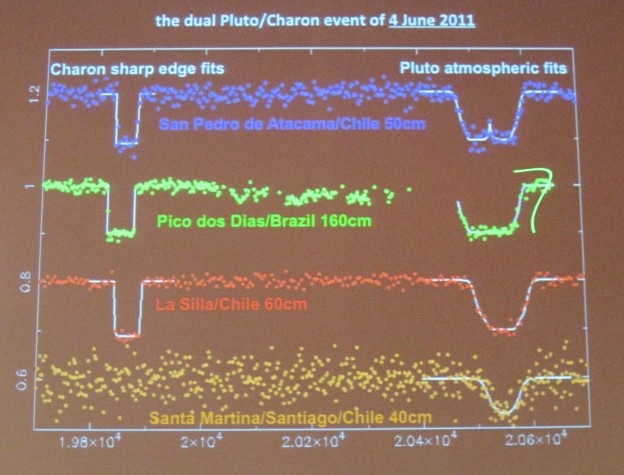 Blog series continues. These are summaries of talks presented on July 23, 2013 at the Pluto Science Conference. The New Horizons mission will fly by the Pluto System on July 14, 2015, a place that has never been explored before by any other spacecraft. Many questions about the Pluto System remain unanswered. For more information about NASA’s intrepid explorer to the Solar Systems’ Third Zone go to http://pluto.jhuapl.edu/ and https://www.nasa.gov/mission_pages/newhorizons/main/index.html.

Richard French (Wellesley College) presented a talk on “A Comparison of Models of Tides in Pluto’s Atmosphere and Stellar Occultation Observations.”

We have come to understand that Pluto’s atmosphere is cold & tenuous, has a long radiative time constant, shows weak diurnal variations, indicates seasonal transport of volatiles with long term variations of atmospheric mass, and seems to be convectively stable. Current Pluto general circulation models (GCMs) predict smooth T(P) profiles reveal mean circulation and thermal structure. But there are problems. GCMs predictions (with these smooth T(P) profiles) are inconsistent with stellar occultation data, which imply much more complex T(P) profile. The other challenge to this mystery is that stellar occultations are spatially constrained (i.e., map across a particular lat/long swath of Pluto surface at the time of event).

Are there waves in Pluto’s atmosphere? This is one proposition to explain the structures (spikes) seen in the Pluto occultation data. Tidal models they have built make predictions for large scale and small-scale structures. Also they can predict temperature profiles with altitude. Next steps are to apply this model to other occultation geometries. Richard French showed a comparison of a tidal model (Toigo et al 2010) against occultation data from an event on Aug 21, 2002 and they showed qualitative agreement.

Richard French’s predictions for New Horizons fly-by: When New Horizons provides a true frost pattern, they can input this into their models and generate large-scale and small-scale structures for comparison with actual New Horizons atmosphere measurements. Their tidal models do generate regionally variable, latitude dependent thermal changes. If this is what New Horizons observers, their model can help constrain parameters.

Bruno Sicardy (Observatoire de Paris, France) next took us on a rich tour of “Pluto’s Atmospheric Pressure From Stellar Occultations: 2002-2012.” 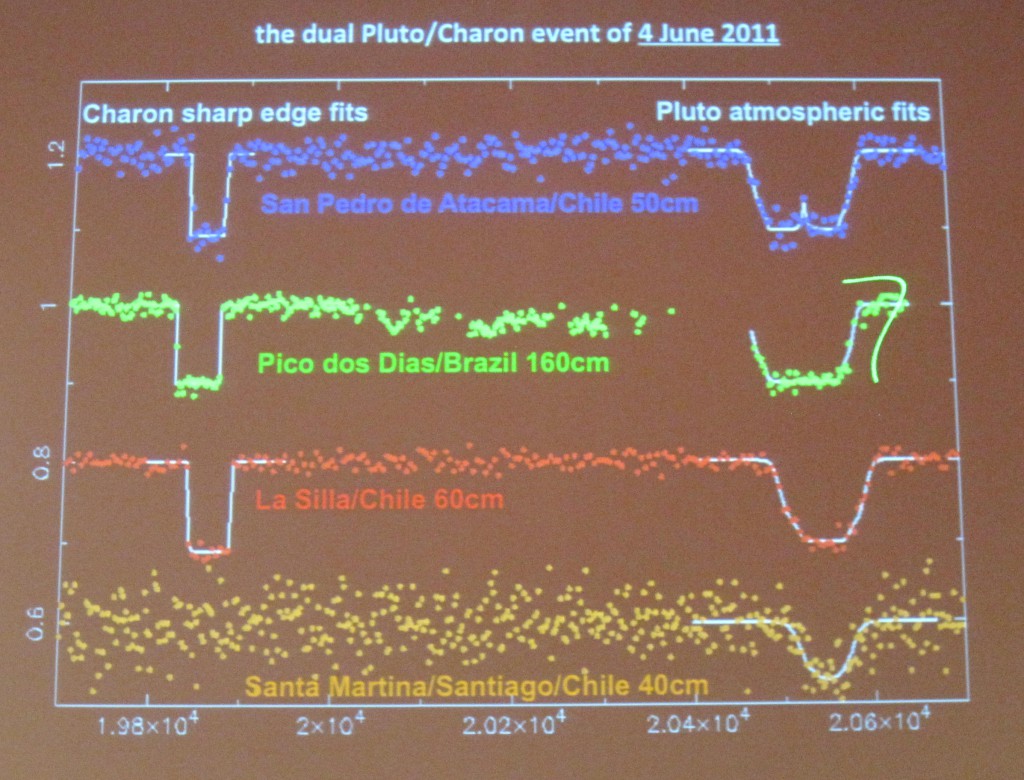 There was a dual Pluto & Charon occultation event on 4 June 2011. Pluto and Charon each pass in front of the star (at different times). Look at curve shapes. Charon’s curve sharply drops, indicative of no atmosphere, unlike Pluto’s curve, which has not-as-steep ingress/egress that indicates the presence of an atmosphere.

Using the light curve data, Sicardy and his team use a temperature vs. altitude model to fit the light curve depth, width and ingress/egress slope. Then with the temperature, they can derive a pressure. He presented results from the most recent Pluto occultation that was observed May 4, 2013. Good data and good fit. Next were shown the derived pressure (at 1215km) for occultation events observed from 1988 to 2013. 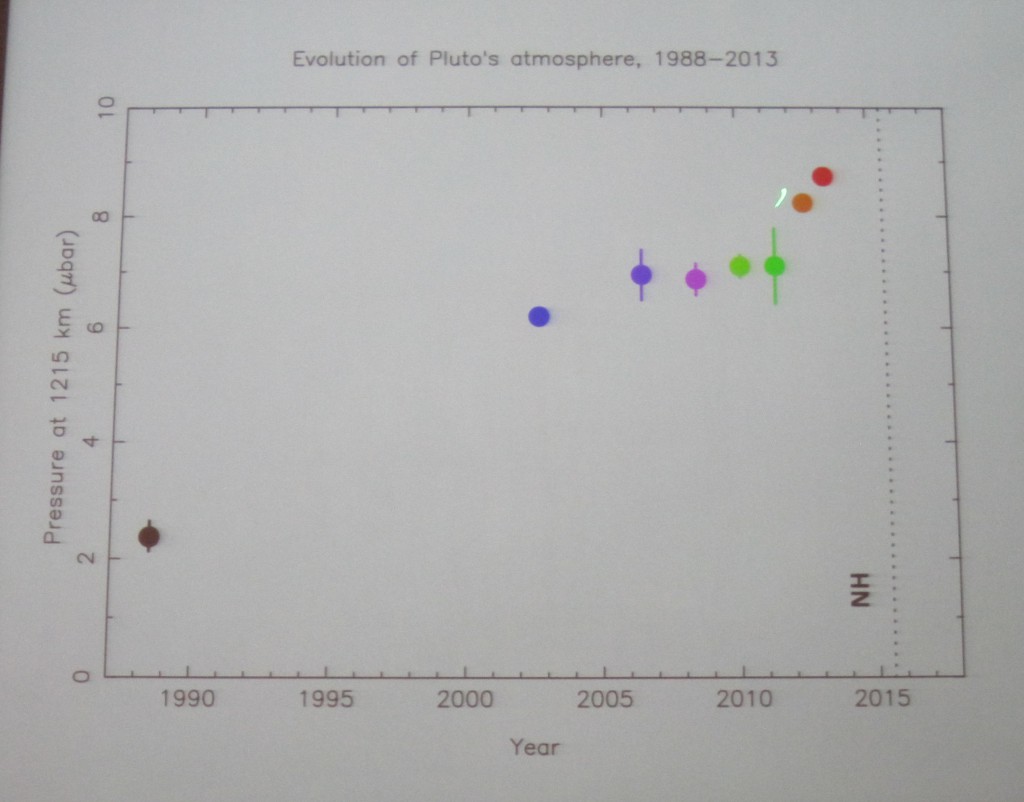 Occultation results show the Pluto atmosphere is increasing over the past few years. There is some notable evolution and implies a regular expansion. But a question from the audience stressed caution as we could be seeing just the northern pole facing the Sun with that contributing to the expansion but it could be a localized phenomena.

Bruno Sicardy’s predictions for New Horizons fly-by: Atmosphere will be present for the fly-by.

Michael Person (MIT) next described “Trends in Pluto’s Atmosphere From Stellar Occultations.” He started his talk with the advantages of occultation measurements:  you get spatial resolution (~1 km at Pluto) with direct measurements of atmospheres (temperature, pressure, number profiles). MIT has collected data sets from 1988 through 2013. Their group tends to separate the upper vs. lower atmosphere when they fit their data. He next showed a light curve comparison over. Are we seeing a gradually decrease lower atmosphere slope? Is there a gradual lowering of the separation boundary?

“Haze or No Haze? That is the question.” Best evidence of haze is from the occultation event of 2002, where there is a distinct change in brightness as a function of wavelength (Elliot et al 2003).  Attempt to look for haze in the 2011 occultation event with SOFIA in three bands was not successful. The main question is why does the haze come and go, and what is causing it?

Alex Dias de Oliveira (Observatoire de Paris, France).“Pluto’s Atmosphere from Jul 18, 2012 stellar occultation.” This is his PhD work and he provided an updated status of the steps taken from prediction of the event, the observation data collected, various calibration items, and first attempts to invert the light curve to get a temperature profile. He observed this Pluto occultation event with the ESO VLT (8m telescope in Chile) with the NACO instrument in the H band (1.65 microns). Comparison with the June 12, 2006 AAT event showed that spikes seen in the light curves were repeated in the July 18, 2012 event he observed wit the VLT in Chile.

Cathy Olkin (SwRI) presented results from “The May 4th, 2013 Stellar Occultation by Pluto and Implications for Pluto Atmosphere in 2015.” This was an event where Pluto passed in front of a R=14.4 mag star with a slow shadow velocity of 10.6 km/s. The event was observed from the southern hemisphere, from Cerro Tololo in Chile.

Erika Barth (SwRI). “Is Methane Supersaturation Consistent with the Presence of Haze Particles in Pluto’s Atmosphere?” She asked the question: If you put haze particles into Pluto’s atmosphere how do they interact with the methane in Pluto’s atmosphere?” She developed a model to ingest haze particles into a supersaturated environment and this predicts the growth of clouds and condensation of methane. Then when methane condenses out, that reduces the amount of observable methane. Her model requires the existence of a troposphere (which we learned earlier in Emmanuel Lellouch’s talk today that there is no evidence for this, but its existence could explain some phenomena, some observed to date, other predicted) and also predicts a thick troposphere as well. She created a Pluto version of CARMA, the Community Aerosol and Radiation Model for Atmospheres.

Jason Cook (SwRI) next spoke about his “Analysis of High Resolution Spectra of Pluto: A Search for Cold Gaseous Methane Layer, and Spatial Variation in Methane Column Abundance.” Occultations have told us that Pluto’s upper atmosphere (above 1195 km) is pretty warm (100 K). But 2.15 micron N2 ice measurements of Pluto’s surface tells us the surface is ~40 K. So this implies there needs to be a cold-layer in the atmosphere. To investigate a search for this “cold layer of air” they took NIR (near infrared) spectra with NIRSPEC on Keck with R=35,000 in 2011. They need to move to a two-temperature model to help constrain the observed data (i.e. measured methane line depths from the high-res NIR spectra), but the hot/cold ratio of the two temperatures is an unresolved topic (pun intended).

They also took spectra of Pluto over several nights to probe the different longitudes of Pluto (Pluto has a rotational period of 6.4 days) and they got a fairly consistent number except near 180 deg longitude where gaseous CH4 was not easily detected. They would like more data to probe this temporal measurement. 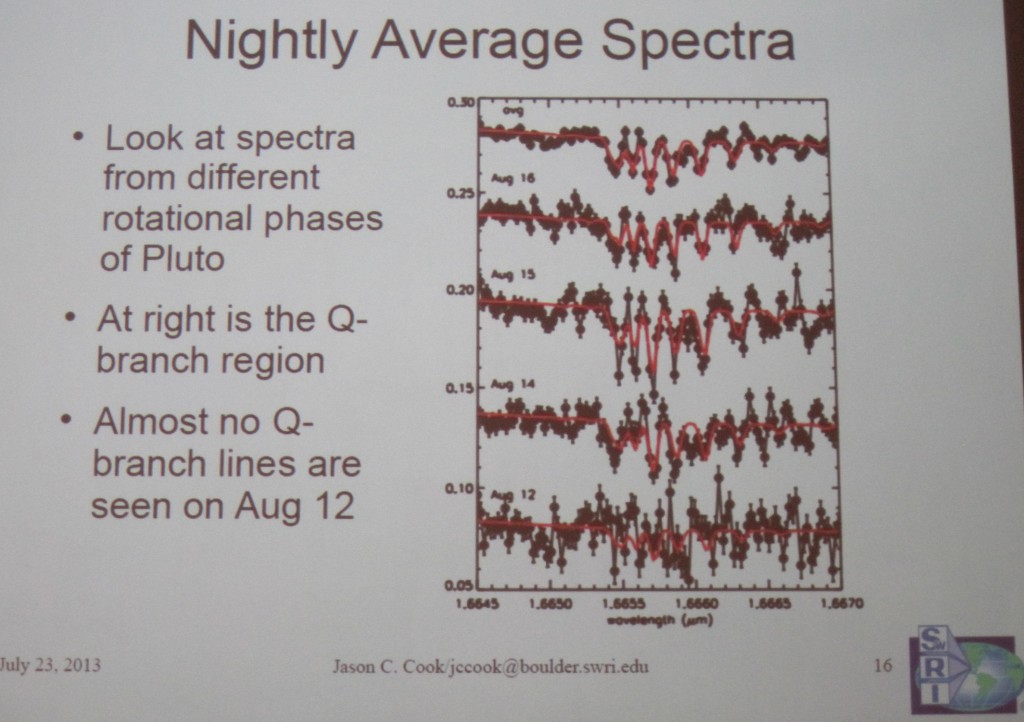 Selection of high-resolution NIR spectra of Pluto obtained over several days. This series probes a range of Pluto rotations and show how methane lines (Q-branch) vary.

Eliot Young (SwRI) spoke about “Evidence for Recent Change in Pluto’s Haze Abundance.” Hazes have been observed on Titan (photolysis products from higher up in the atmosphere) and Triton (condensates from surface). The August 21, 2002 occultation showed evidence for haze (change in brightness with color, Elliot et al 2003), but 2007 (0.51 & 0.76 micron) and June & July 2011 occultation events in different bands (I & K bands) showed no change in color.

Occultations can only probe down to a certain depth, so they are limited. We don’t really how close you got to the Pluto surface. If you have a special case where you can have a central flash or sets of flash spikes, you can derive more information. By applying a new technique on the 2007 Mt John light curves, he proposed they can determine amount of haze by evaluating the attenuation in those parts of the light curve.

Central Flash Description:  A central-flash occultation is visible when the observer is located near the center of the shadow path of the object. It is here where the atmosphere near the edges of the occulting body (for Pluto occultations, this is Pluto) refracts extra star light (from the background star) directly opposite from the star, forming a “brightening” in the middle of the deep light curve.

Mark Gurwell (Harvard CfA) provided a talk entitled “Atmosphere CO on Pluto: Limits from Millimeter-Wave Spectroscopy.” Carbon monoxide (CO) is expected based upon the presence as an ice on its surface. The first direct detection of CO was done in the NIR with the VLT (Lellouch et al 2011). Then JCMT (Greaves et al 2011) revealed a CO(2-1) line in the submillimeter, but this line had not been there a few years back, leaving a mystery. There is still mystery in fitting the CO abundance based on the measured submillimeter width and strength of this line. He did show that Pluto had been in the fore-ground of a galactic emission during the JCMT observations. He supposes that they had contamination. They did their own observations using the SMA sub-millimeter telescope multiple times and did not detect the CO(2-1) line in the spectra (they have upper limits). So he is excited about using the ALMA array that has 30-50x SMA sensitivity to really address the CO, nitriles and isotopes.

And the final talk of the morning Atmosphere session just could not leave Charon out of it.

Alan Stern (SwRI) “Cometary Impact Produce Transient Atmospheres on Charon.” Most scientists have come to accept that Charon does not have an atmosphere (see earlier posting in Bruno Sicardy’s talk showing the dual occultation event for Pluto and Charon in Jun 2011.) But he postulates what about impacts? Coming from the Kuiper Belt, impactors (assuming cometary-level amounts of volatiles) could provide volatiles to the surface to Charon and therefore creating a “nanobar” atmosphere on Charon. Similar events could lead to atmospheres on Kuiper Belt objects. Their modeling (Trafton & Stern 2008) predicts presence of N2, CO, Ar, CH4, with CO dominating after impacts, and N2 being the dominate species (in terms of amount).

Predictions for New Horizons. Duty cycle would be short lived so it will be rare if New Horizons catches this event. However, with smaller impactor sizes, there could be a possibility that those events could have occurred within the “photoionization time” (before the molecule breaks down or escapes) or resulting implanted molecules by the time New Horizons gets there. Alan Stern coyly stated, “could be as much as a 25% chance” to see an nano-bar atmosphere on Charon.

A good question regarding surface volatiles that are revealed by impacts got the crowd excited. After all, when you describe an atmosphere you can categorize things as sources and sinks. Sources bring material to the system and here they could be not only the KBO impactor but also the materials that are revealed from the impacted-body after the impact.

On July 14, 2015 New Horizons will be doing a very sensitive experiment via the observations of the Charon occultation (Charon passing in front of our Sun as viewed from New Horizons).

Charon may indeed hold a few surprises of her own!

4 thoughts on “More predictions about Pluto’s changing atmosphere. And Charon may have a few surprises of its own.”