This is a blog series about talks presented that Pluto Science Conference, held July 22-26, 2013 in Laurel, MD.

Darrell Strobel (JHU) next took us through a study about  “Pluto’s Atmosphere: Escape and the Relationship to Density and Thermal Structure.”

But first, what hydrodynamic escape discussion could be complete without a few equations…. 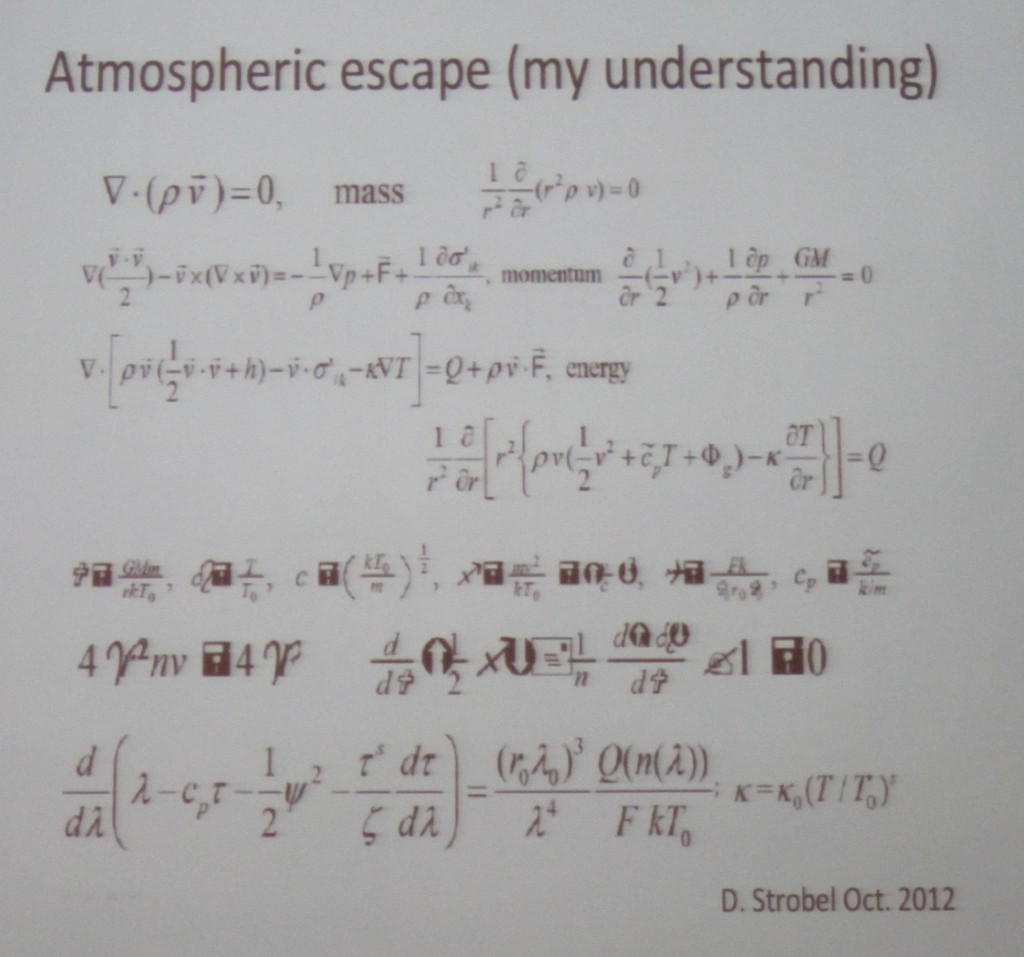 Yes, this is what an atmospheric modeler solves for. He/she solves numerous energy-balance, energy-transport, etc. equations to derive properties for making an atmosphere.

The Hydrodynamic escape rate is a key output from these numerical models for Pluto, with predictions in the range of 1.5-6.7 x 1027 particles/s. The basic problem with computing hydrodynamic escape is due to the presence of a gravity well that these molecules need to escape from. Essentially, you need an additional energy input (such as thermal) to drive the escape process.

Some other key terminology: “The exosphere is a thin, atmosphere-like volume surrounding a planetary body where molecules are gravitationally bound to that body, but where the density is too low for them to behave as a gas by colliding with each other.” (Wikipedia) It is the uppermost layer where the atmosphere thins out and merges with interplanetary space. The exobase is the lower boundary of the exosphere, defined as the altitude at which the atmosphere becomes collisionless.  Atmospheres can lose atoms from stratosphere, especially low-mass ones, because they exceed the escape velocity (Ve= (2GM/ R)½). This is known as (Jeans escape or Thermal Escape). The Jeans parameter (lambda) is a measure of how efficient the loss mechanism is. Larger lambda values implies less loss (smaller escape rates).

Models by different groups predict Pluto’s exobase between 5 and 10 Pluto radii. Assuming Pluto radius of 1200 km, Pluto’s exobase is in the 6000-12,000 km range. New Horizons’ nominal trajectory will bring the spacecraft to within ~10,000 km of Pluto’s surface and ignoring the slight fact that there are uncertainties in deriving Pluto’s size in the 20-100 km range and ignoring whether you determine a planet size by including or excluding the atmosphere, there is a possibility New Horizons could be flying through Pluto’s exosphere. Such an extended atmosphere could be affected by Charon and could affect Pluto’s interaction with the solar wind at the New Horizon encounter, as measured by New Horizons instruments PEPSSI and SWAP. (For more talk summaries about solar wind, see later blog entry).

A plot of temperature in Kelvin (x axis) vs. altitude in km (y axis) is a typical output of this type of model. Below is a particular plot shows the effect of adiabatic cooling, which Darrel Strobel stressed, is a key component that cannot be ignored. Another key output from these models is the computation of number density (N2 molecules/cm2/s) as a function of altitude. 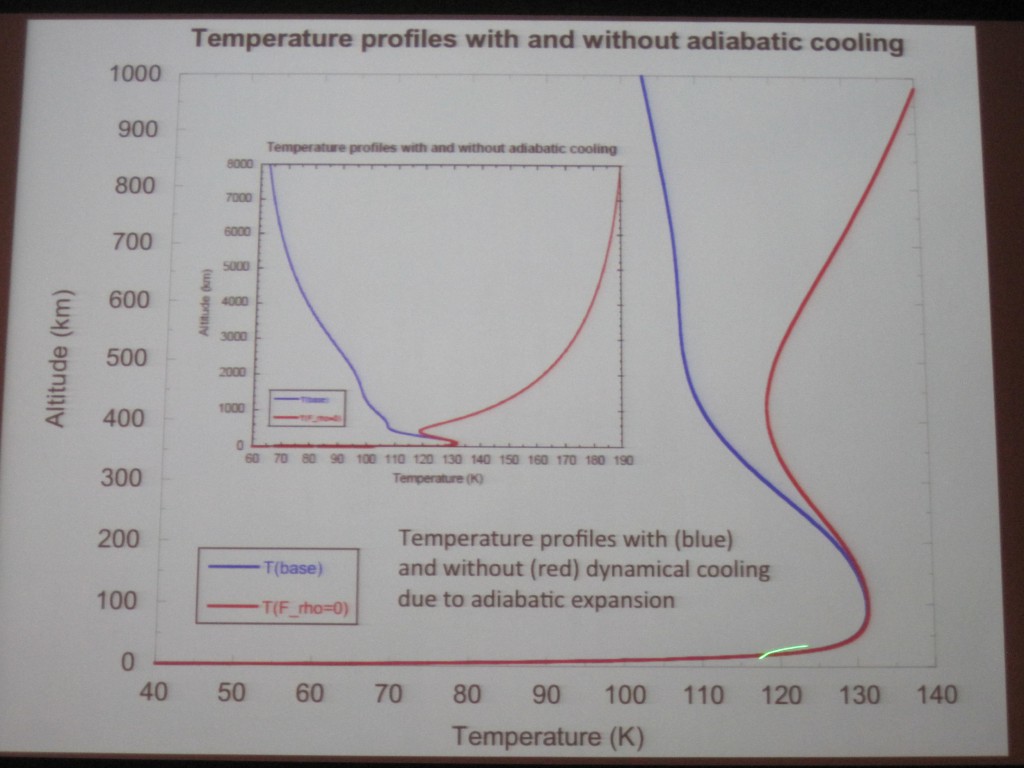 Temperature profile with altitude for models with (blue) and without (red) adiabatic cooling. The surface is at 40 K (which is from observation evidence) and upper atmosphere temperatures are in the 100s of Kelvin (supported by NIR spectral observations of methane). The two models predict wildly different temperatures at high altitudes depending on whether cooling is occurring.