The July 23, 2013 morning session of the Pluto Science Conference started with a collection of talks addressing what we know and what we don’t know about Pluto’s atmosphere.

What do we know about Pluto’s Atmosphere? We know that it is a nitrogen (N2) dominated atmosphere with methane (CH4) (tens of %) and probably carbon monoxide (CO). It’s about 10-microbar (pressure) class showing evidence for changes in pressure on year/decade timescales. There is also evidence for waves (dynamic changes), and the atmosphere does have a thermal structure, despite the details being hotly debated in the community (pun intended). People do agree that the surface is cold (40-50 K) and then the atmosphere is around 100K at micro-bar pressure levels. The details of the cold/warm layers in between are the stuff that thermal models are made of!

Pluto was discovered in 1930, but it was only in 1985 that the first observation detecting an atmosphere around Pluto was made. It was discovered through a measurement called a stellar occultation, when Pluto crossed between a star and an observer on Earth, on August 19, 1985 (Brosch, MNRAS, 1995). A higher signal-to-noise light curve was obtained on the June 9, 1988 (Elliot, et al 1989) occultation events whose light curves indicated existence of waves. 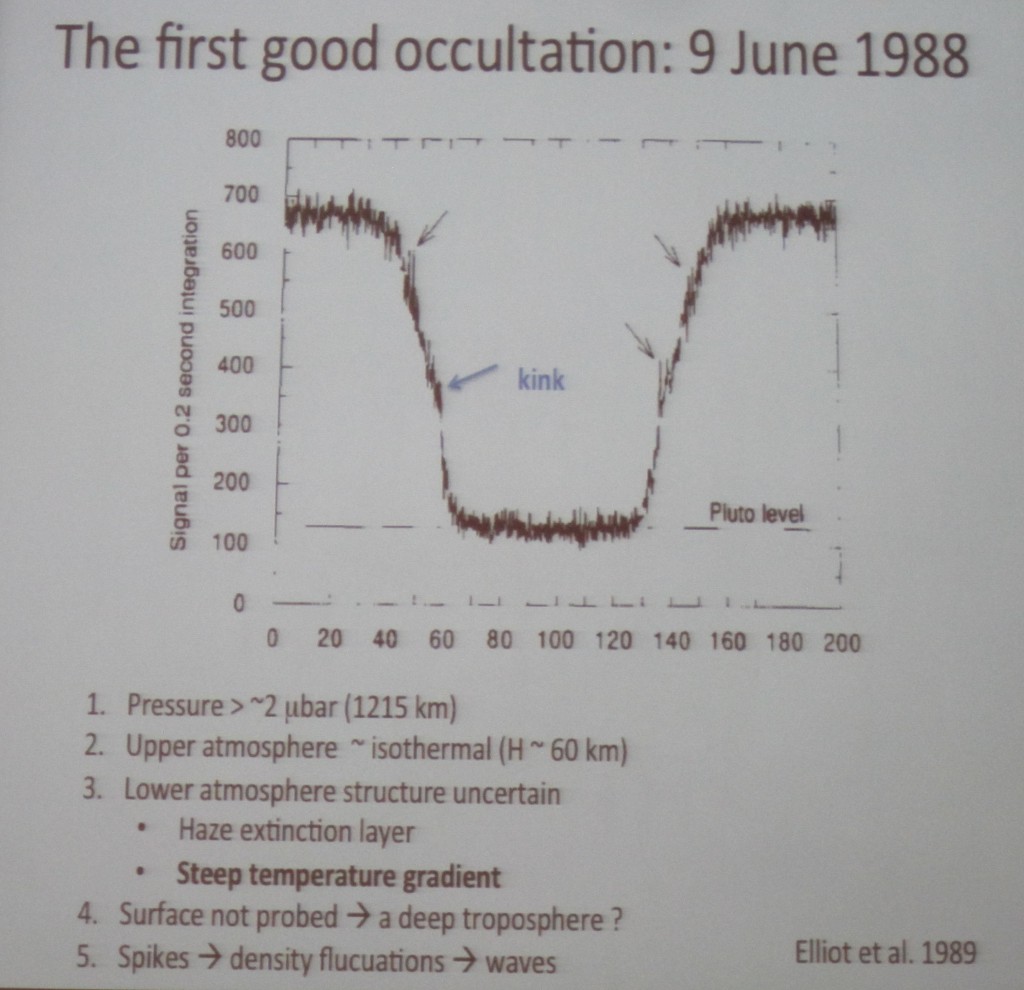 Occultation light curve for Pluto passing in front of a star on June 9, 1988 (signal vs. time) Features in this dataset indicate the upper atmosphere (above the ‘kink’) and lower atmosphere (below the ‘kink’). The ‘kink’ presence is theorized to be due to heating by methane (Hubbard et al 1990). Waves are indicated by the “spikes” in the light curve. When the scientists create this light curve from the occultation event, they then “invert” it to fit a temperature model and derive pressures for different scale heights.

The first molecular detection of anything in the Pluto’s atmosphere was methane (L. Young et al 1997) using the IRTF (3.5 m telescope) in May 1992. This was confirmed and re-measured in 2008 with higher resolutions and sensitivity (Lellouch et al 2009) using the VLT (8 meter telescope) with more recent observations in 2012. Emmanuel Lellouch showed that with those two latter datasets there was no evidence of change in the last four years. With this higher resolution data they can use it to provide a fit to the temperature using the line widths.

Carbon monoxide (CO) was detected in the submillimeter at 240 GHz with JCMT (Greaves et al 2011), but this detection and the inferred amount has lead to questions that the current models cannot produce this molecule with the temperature and amount inferred from the observations. This particular topic was addressed by Mark Gurwell’s talk later in the morning.

There is also evidence for diluted methane (CH4) and pure CH4 ice on Pluto’s surface. The atmosphere CH4 is much greater than what is expected from an ideal mixture, so this implies there must be a mechanism to enrich the CH4 component in Pluto’s atmosphere. Recent thermo-dynamic models and “GCMs” (general circulation models) predict a consistent mixture for CH4.

The combination of both the infrared spectral results and the visible (and in some case near-infrared) occultation light profiles helps resolve temperature profile (i.e., how temperature varies with altitude) inconsistences.

Speaking of temperature profiles, one of the hotly debated topics for Pluto atmosphere specialists is whether their models contain a tropopause. Per Emmanuel Lellouch’s overview talk, he stated, “There is no proof there is a troposphere. And deep troposphere are not predicted by the GCMs.” However, many Pluto atmosphere specialists often invoke a troposphere in their calculations to help predict other things that have been inferred to occur on Pluto.

Pluto’s atmosphere seems to be changing. There is observation of pressure evolution. Specifically, the pressure appears to have doubled from 1988 to 2002 (Sicardy et al 2003, Eliot et al 2003). Evidence that the pressure is continuing to increase is based on recent 2013 occultation data. This has led to the development of Volatile Transport Models. These are basically computations that track the dominant species, and for Pluto, it is nitrogen, through multiple temperature and pressure ranges, heat exchanges such as sublimation cooling in summer and condensation heating in winter. A schematic of a Volatile Transport Model from Leslie Young, New Horizons deputy Project Scientist, is shown below. 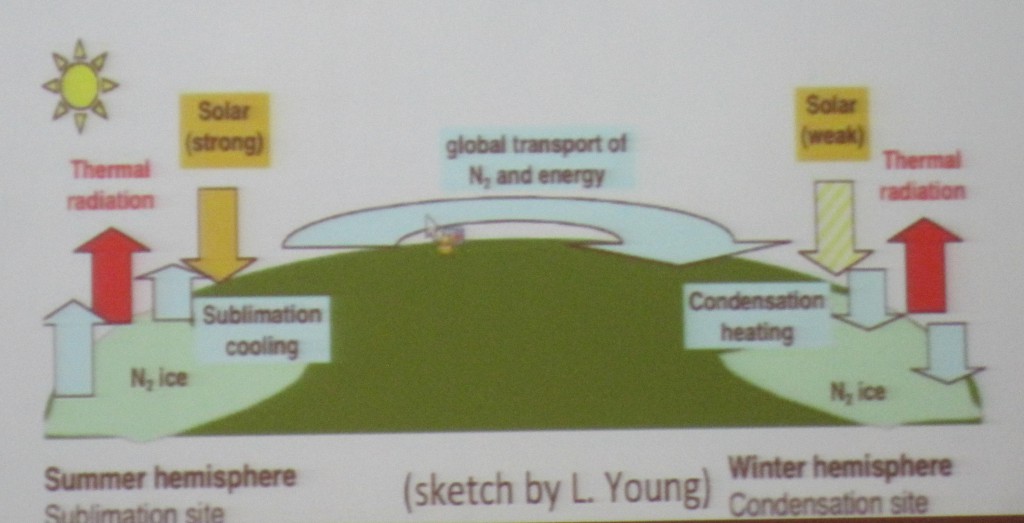 Other Oddities in Pluto’s Atmosphere. There appears to be evidence for photochemical haze from a 2002 occultation (Elliott et al 2003) but occultations in 2007 and 2011 did not show evidence of this. Hazes are large particles in the atmosphere (almost cloud-like) and the 2002 occultation had suggested hazes since there had been a distinct change in brightness as a function of wavelength. Why does the haze come and go, and what is causing it?

Pluto has also indicated “reddening” (color-change) that occurred between 2000 and 2002 (Marc Buie using color photometry with HST). That’s a mystery.

Waves (dynamic changes) in atmosphere are indicated by some of the occultation measurements. What could cause waves? There are multiple suggestions what could form these dynamic changes (even evoking the elusive gravity wave mechanism). Could it simply be Pluto’s atmosphere response due to the diurnal variation of sublimation of N2 particles?

What will Pluto’s Atmosphere be like when New Horizons comes to take a close look?