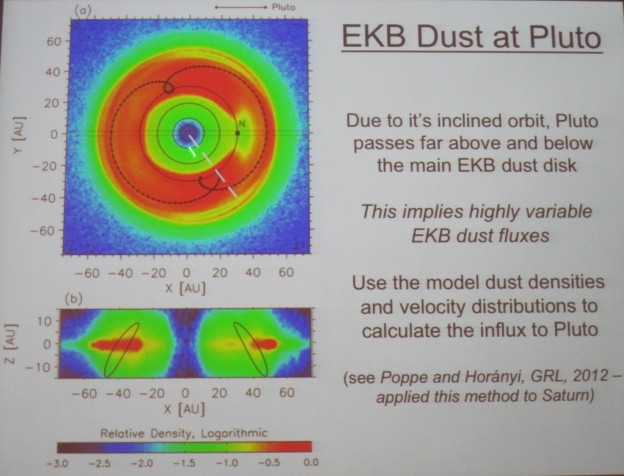 From the July 24, 2013 morning session at the Pluto Science Conference.

Simon Porter (Lowell Observatory) began this morning’s session with “Ejecta Transfer within the Pluto System.” He asked, “Where does the short lived dust go?” Having small satellites is not unusual in the solar system. Both Jupiter & Saturn have low number-density rings formed from short-lived dust particles ejected from small satellites.

Their Hypothesis: Dust ejected from the small satellites is swept up by Pluto and Charon.  Their Experiment: Simulate dust trajectories in a computer (N-body computation) starting randomly in the system (but constrained within the orbits of the small satellites) and map where they impact Pluto & Charon. Repeat this 10,000 times for a combination of parameters. Their Results: Dust particles do hit all the bodies in the Pluto System. For the Charon impacts, smaller particles survive longer, and those that hit Charon tend to have speeds around 50 m/s (like fastball pitcher). If a particle were to hit Pluto, it would be happen with speeds in the 50-200 m/s range and occur much quicker (due to the fact that Pluto has a larger gravity mass than Charon). They found that lower speed particles would hit the Pluto’s trailing side, whereas the higher speed particles hit the Pluto’s leading side. They also found a slight northern preference for smaller particles due to radiation pressure. And they made an intriguing observation that the impacts they computed correlate well to bright albedo areas (high reflectivity) on the Pluto surface. Coincidence?

David Kaufman (SwRI) next talked about “Dynamical Simulations of the Debris Disk Dust Environment of the Pluto System.” He was interested in modeling where debris dust would exist in the Pluto System. The motivation was to evaluate the probability of whether New Horizons would encounter a large enough dust particle that could be catastrophic for the spacecraft. He described the dynamics: the Pluto System can be approximated by a “circular restricted three-body (Pluto-Charon-particle) problem,” but it’s far from simply three bodies. There are features such as the Charon Instability Strip, where the moon Charon sweeps away material. The Lagrange points are unstable.  And the outer moon can significantly perturb (change) trajectories that cross their orbits. He mentioned that “unusual type orbits” can be sustained by the unique gravity and motion characteristics of the Pluto System. He’s done numerical simulations following the particles, governed by physics principles for the system, over a time period of 500 years, and derived that the debris disk is an expended three-dimensional and stable. The inner debris disk recreated the instability strip.

Silvia Giuliatti Winter (UNESP, Brazil) talked about  “The Dynamics of Dust Particles in the Pluto-Charon System.” She is interested in the orbital evolution of small particles ejected form the surface of Nix and Hydra and what happens to them when dust particles from interplanetary meteoroids impact these satellites.  The goal is to place constraints on predictions for a ring in the Pluto System. They model 1 micron and 5-10 micron “dust particles” and track where they travel.

Conclusions: Particles released from the surfaces of Nix and Hydra temporarily form a ring. Collisions with the massive bodies remove 30% of the 1micron size particles in 1 year. The ring that was formed is very faint (optical depth tau=4×10-11).

Implications for New Horizons: For such a faint disk, it will be a challenge for New Horizons to detect. However, if there is forward scattering it could be bright enough to be detected. (The models provided did not include a phase function, that is, a geometric indication of where the sun-light could illuminate the particles).

Othon Winter (UNESP Brazil) spoke about “On the Relevance of the Sailboat Island for the New Horizons Mission.” In investigating where particles would find stable orbits, their modeling predicted a region where there was a cluster of orbits characterized by high eccentricity (e= 0.2 to 0.8) and located around 0.6 Pluto-Charon semi-major axis (i.e. between Pluto and Charon). They nicknamed it “Sailboat Island’ because on a eccentricity vs. distance from Pluto plot it looked like a sailboat. This population of “stable orbits” had not been predicted from previous work.

The figure above is taken from Giuliatti Winter et al 2010 where they describe a family orbits called S-type that are stable. The plots are in d vs. e. where d, on the x axis is the Pluto-centric semi-major axis (how far from the Pluto barycenter) and e, on the y axis is the eccentricity. The “white” areas are orbit solution that were found to be stable. Area ‘1’ is the “Sailboat Island” described in the talk. Left are prograde (inclination=0) orbits, right are retrograde (inclination=180 degrees) orbits. 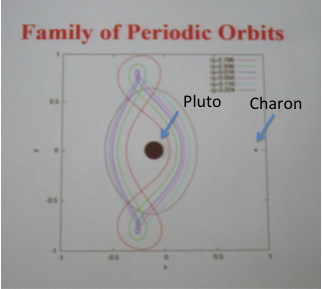 Example of a particular family of orbits from the “Sailboat Island” parameter space in the full-family of stable orbits.

Implications for New Horizons: Opportunity for discovery to look for these objects in the Pluto-Charon system.

Andrew Poppe (UC Berkeley) on “Interplanetary dust influx to the Pluto System: Implications for the Dusty Exosphere and Ring Production.” The three previous talks addressed what happened to particles in the Pluto system with time (i.e., their lifetime, where they impacted objects, what stable orbits they achieved). Here he asked, could the source of the dust come from interplanetary sources? For example, come from the Kuiper Belt being dragged into the Sun. 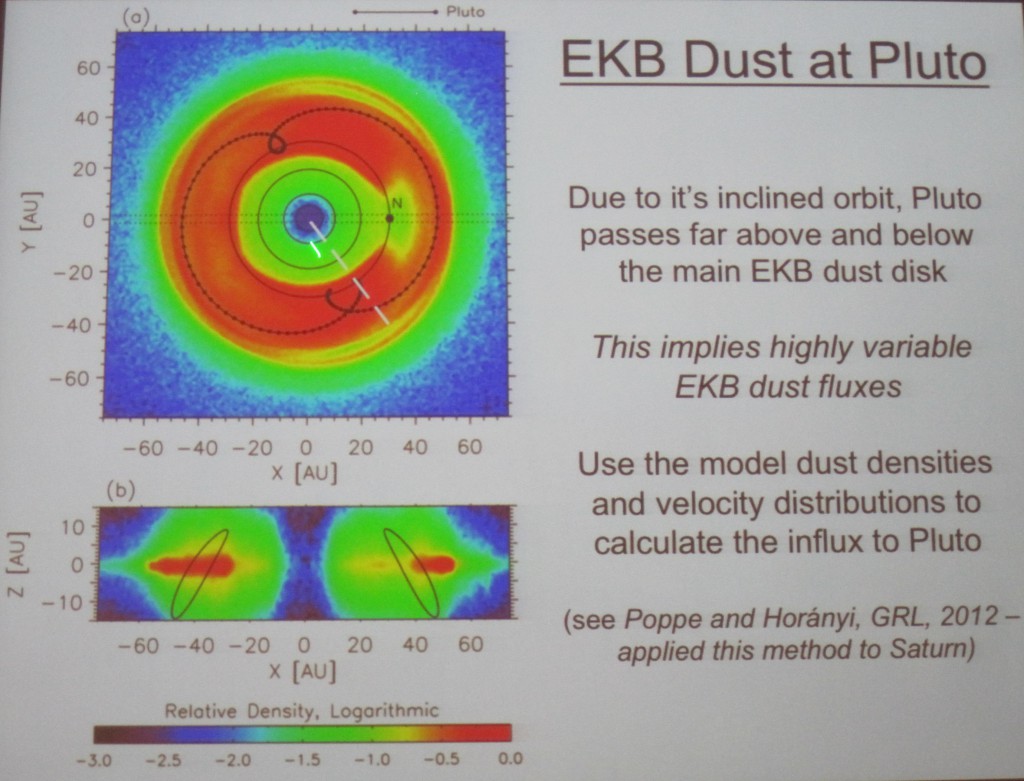 Because Pluto’s orbit is highly inclined but our Solar Systems Kuiper Belt dust disk is mainly in the ecliptic plane and Pluto periodically passes through the thickest part of the dust disk.  (EKB = Edgeworth–Kuiper belt) 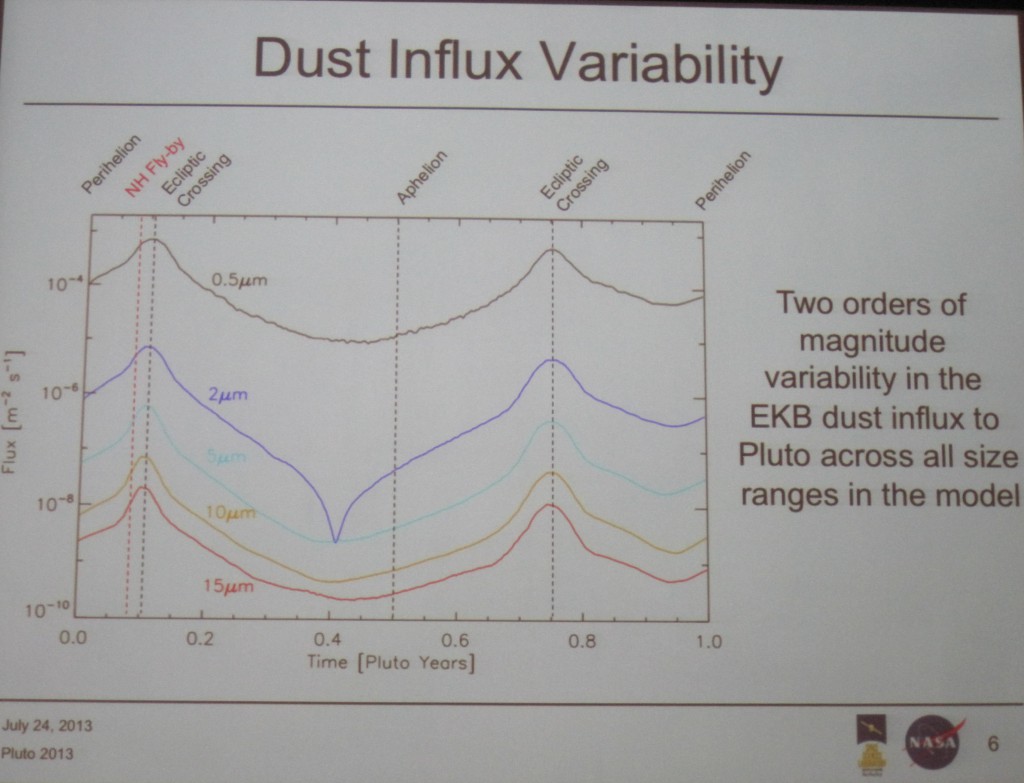 Computation of the dust flux (in particles/m2/s) for Pluto over one Pluto orbit. The peaks are when Pluto crosses the ecliptic (expected). New Horizon’s July 2015 Pluto fly-by (shown by the red dashed line) will be close to an ecliptic crossing.

Implications for Rings. They turn their “mass influx models” and do calculations on where rings could form. They predict optical depth tau < 10-7 (in backscatter). They are working to refine their models to include larger grains.

Open questions. We still do not really have a good handle on the amount of dust generated by “the Kuiper Belt residents”. This is an active area of study.

Henry Throop  (SwRI at large) talked about putting “Limits on Pluto’s Ring System from the June 12, 2006, Stellar Occultation.” You can search for rings by direct limited (e.g., using HST) or using stellar occultations.  Direct imaging is 2D but at coarse scales whereas stellar occultation give 1 D cuts at higher spatial resolution. He saw that although the June 12, 2006 occultation event was 61 seconds in duration, about 3 hours of data was taken over the entire event, so he started to look outside the main events in search for rings that would appear as shallower drops in the light curve.

Three hours of data taken around the June 12, 2006 Pluto occultation even. They did not see any rings or debris with this data set. Looking back at the timing they realized that Nix was just missed by 1000 km or so. So had their been a cosmic coincidence that this occultation caught Nix, Nix would have been discovered 10 years earlier.

Implications for New Horizons. This null results combined with other searchers for rings (e.g. recent HST observations) it put limits on ring detection, but this dataset is the only data set looking for rings at scales < 1500 km, the spatial resolution on HST.

The New Horizons spacecraft on its fly-by through the Pluto system in July 2015 should detect a ring with its Student Dust Counter instrument, if such a ring exists.