Summary talk entries for the Pluto Science Conference continues. This is from the morning of July 24, 2013th on the topic of “Composition.”

Dale Cruikshank (NASA Ames) set the stage with a spectra-rich presentation and gave an overview talk about the “Surface Compositions of Pluto and Charon.” Putting it in context, even 45 years after Pluto was discovered, we did not know much about Pluto only where it was in the sky and its rotation period. That rapidly changed when Dale and colleagues saw strong evidence for solid methane on Pluto in 1976 (Cruikshank, Pilcher, Morrison, 1976 Science 194, 835), Jim Christy discovered the companion moon Charon in 1978, and repeated observations were made of Pluto and Charon in the 1980s.

Spectroscopy, the technique which spreads light into different wavelengths, has been a powerful diagnostic tool for the identification of molecular species, and therefore tells us the composition of the object. Low-resolution (R~100-500) spectra is sufficient to identify ice-solid features which are characterized by wide features, but higher resolution (R~1,000-10,000s) helps constrain models that determine temperature and also . New Horizons’ LEISA spectrometer covers the 1.25-2.5micron spectral band, with resolution R~240, and a mode of R~550 between 2.10-2.25 microns, making it ideal for identifying solid features. It’s proximity to Pluto during the July 2015 fly-by provides unprecedented spatial resolution. Compared to ground-based & Hubble spectral measurements which can only provide full-disk (~1500km/pix) measurements (because Pluto appears only in a few pixels), New Horizons’ LEISA will provide the true “first look” at the composition of Pluto at 6.0km/pix (global) with some patches at 2.7 km/pixel.

Images in this blog entry show flux (measure of amount of light) or albedo (measure of reflectance) versus wavelength. 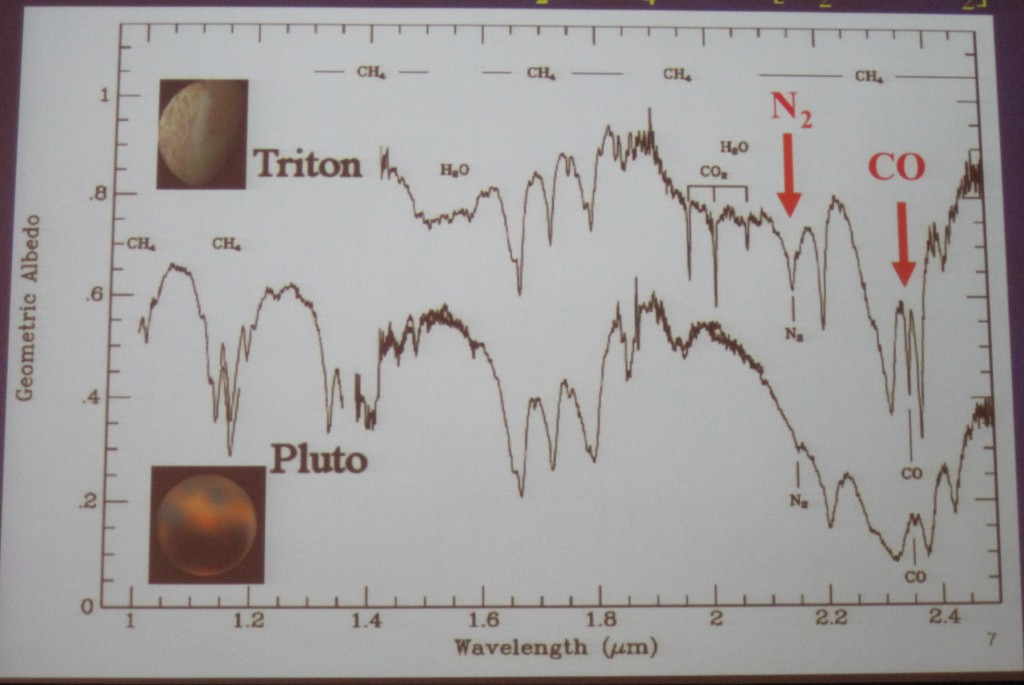 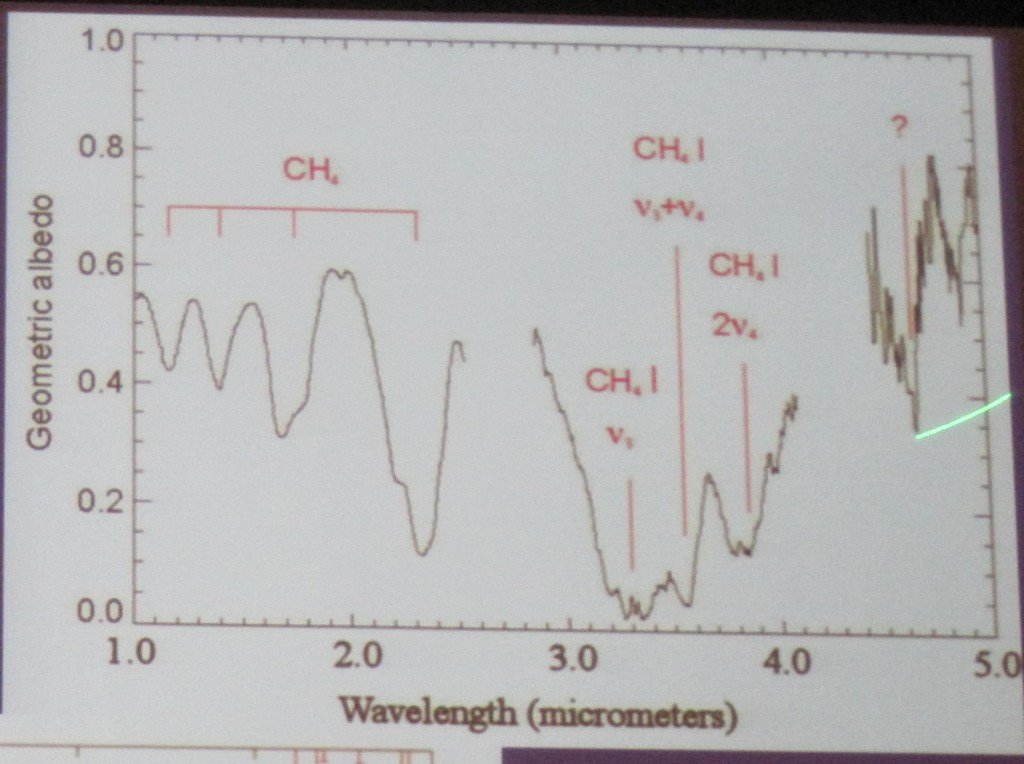 Pluto’s mid-infrared (Protopapa et al 2008) show a series of methane bands. The gap at 4.2 microns is due to CO2 absorption from the Earth’s atmosphere. 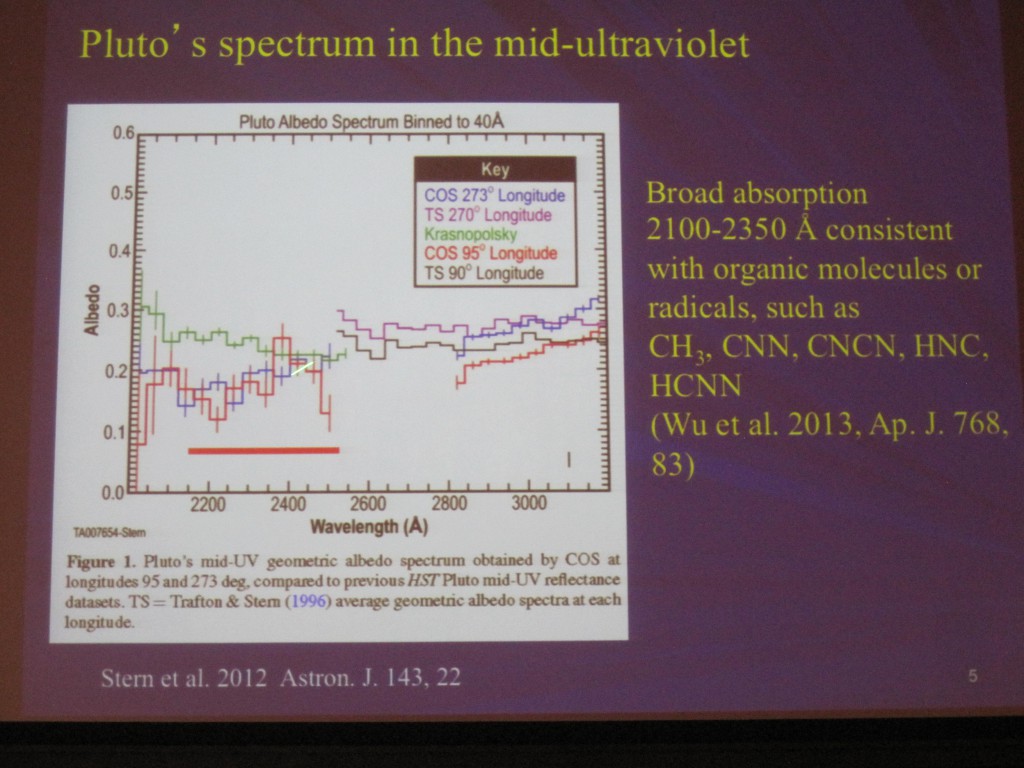 What do we know about the surface of Pluto? The major surface ice components are methane (CH4), nitrogen (N2) and carbon monoxide (CO). Some of the CH4 is pure, and some may be dissolved in N2. N2has been seen in two crystalline phases and the thickness should be at least a few centimeters. CO, may or may not be dissolved in N2. Ethene (C2H6) has also been detected (De Meo et al 2010). Suspected species, not yet detected, are Hydrogen Cyanide (HCN) and Carbon Dioxide (CO2). Predicted species include those from atmospheric chemistry, surface chemistry and other radicals.

There are tantalizing hints that HCN and other nitriles (where you have a carbon  with three bonds to a nitrogen molecule with the 4th bond to another atom or group) are potentially present (Protopapa et al 2008). If confirmed, the presence of HCN opens up a series of chemistry pathways that enable Pluto to be a pretty complex place. 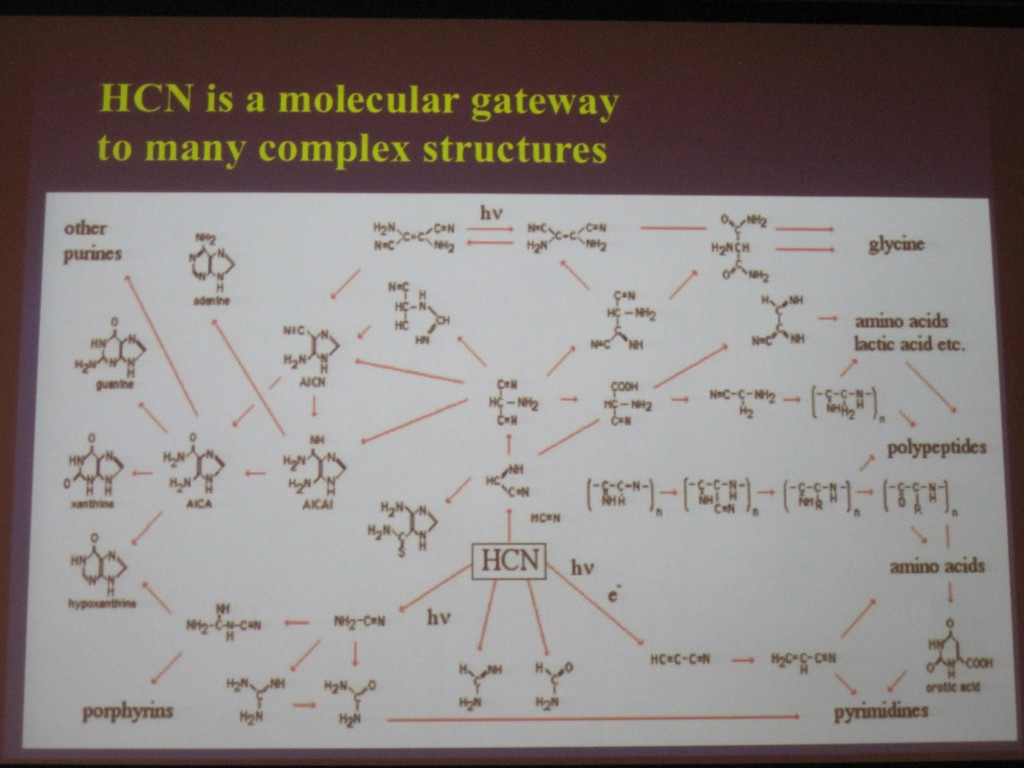 HCN Chemistry pathways. HCN has not been confirmed to exist on Pluto, but suggested. If present, a whole set of possible chemistry becomes possible.

These ices are white but Pluto has a colored surface. It’s actually quite red. The coloring on Pluto is hypothesized to be due to the presence of tholins, a complex organic molecule formed by ultraviolet irradiation of simple organic compounds. 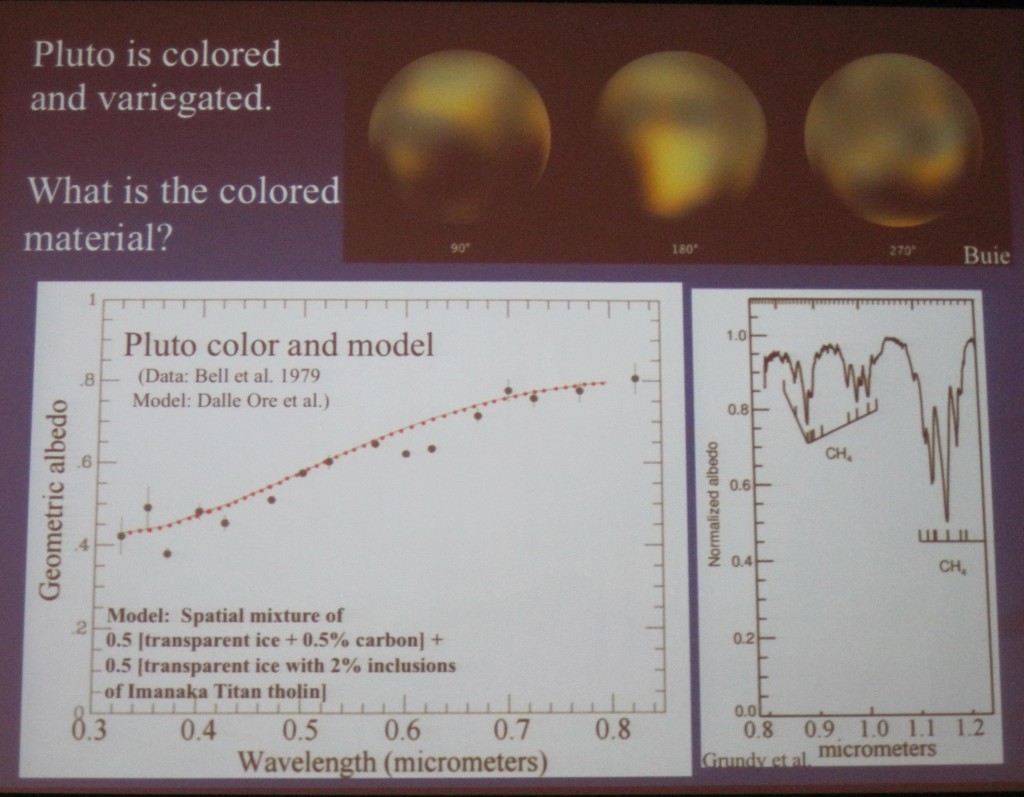 Geometric albedo (measure of reflectivity) of Pluto as a function of wavelength. See how red it looks?

The Surface of Charon. Charon has an intriguing different kind of surface than Pluto. There is water (H2O) ice, perhaps crystalline ice, and ammonia (NH3) hydrate. But there are no CO, CO2, N2 or CH4, all which are present (or predicted) for Pluto. The nature and source of the ammonia is under debate. Could it come from below the surface and diffuse up or come from cryo-volcanism? 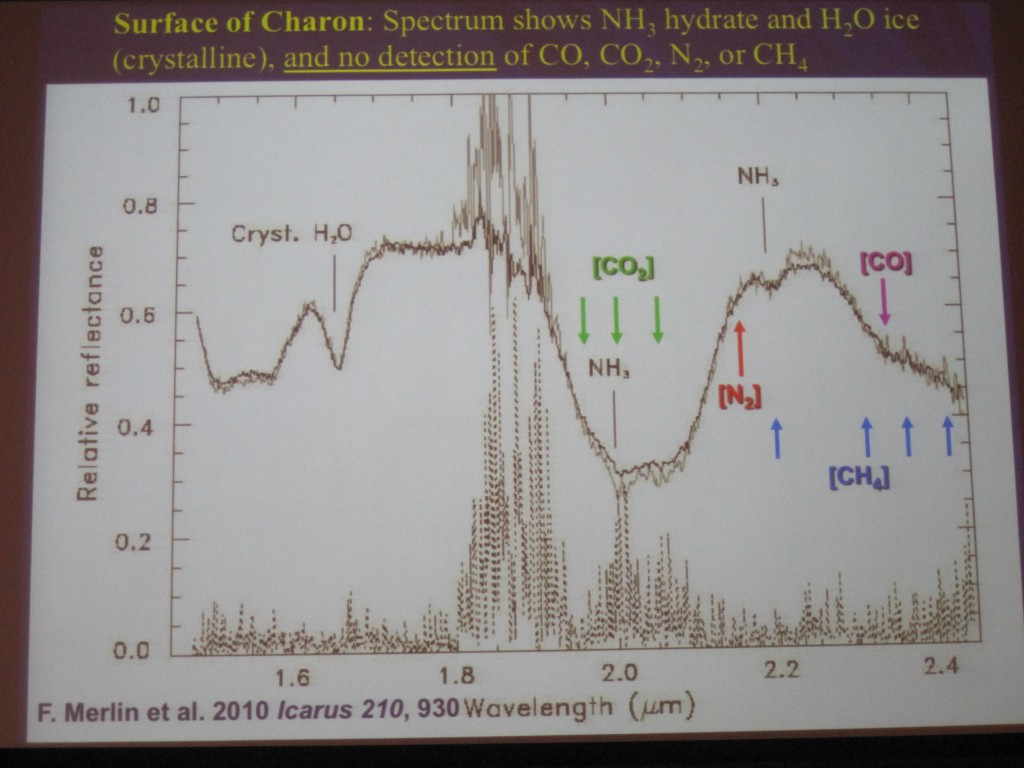 Predictions for New Horizons. It will be hard to find HCN with LEISA due to its spectral resolution as there is a strong methane band nearby. Dale Cruikshank thinks it will be challenging as well to find alkenes.

The mystery of the missing CO2 on Pluto remains. Carbon dioxide is seen on Triton (see above), whose spectra is very similar to Pluto. Dale Cruikshank looks to NASA’s JWST (James Webb Space Telescope, a 6.5 m diameter visible infrared space telescope) as the proper tool to make this detection. New Horizons LEISA instrument has probably to low a resolution to detect CO2 features around 2 microns.

They would obtain disk integrated hemisphere spectra because Pluto fills the SpeX slit, but during the course of this long monitoring they probed a variety of longitudes. Below are the longitudes on the Pluto that they probed. Each green point is the center of a particular pointing. This is overlaid on the best albedo (reflectance) vs. longitude surface map of Pluto from Marc Buie. In the coordinate system shown in this image, 0 deg longitude is facing Charon, with 180 deg longitude anti-Charon. 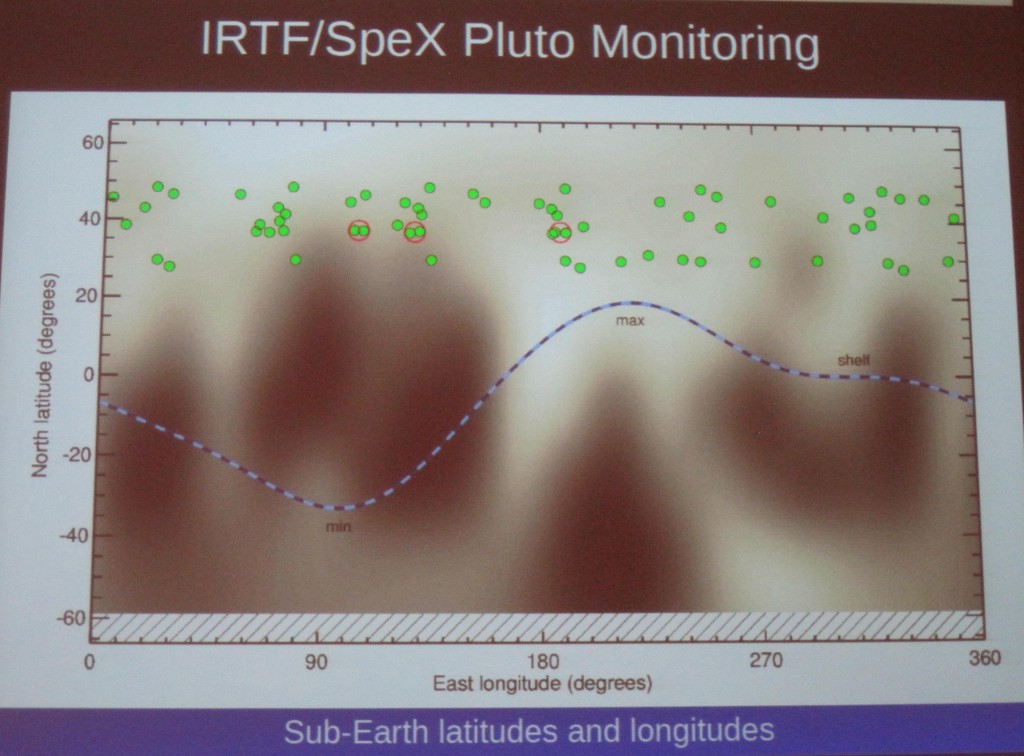 Species abundance (measured as equivalent width) as a function of Pluto longitude. They have found that max CO amount is correlated with the 180 E region (anti-Charon), whereas largest amounts of CH4 is in the 270 E region. Equivalent width is a calculation of the depth of an absorption feature with respect to the absence of the feature at nearby wavelengths (continuum). When plotted against time, or in the case above, against spatial location (longitude location on Pluto), it can tell you something about the abundance variations of that molecular species.

In summary, they have found that ice distributions seem heterogeneous (mottled, not smooth). The NIR spectra show intriguing parallels between Pluto and Triton. From this 10 year period of observations they find that CH4 is increasing but CO and N2 is decreasing. They have also observed non-uniformities in both time and longitude.

With a 10 year Earth program they have only observed ~5% of a Pluto year, so perhaps they will start seeing seasonal changes? For a more lengthy discussion on suggested Pluto seasons, see this later blog post entry.

Predictions for New Horizons. Will Grundy is eagerly awaiting New Horizons LEISA’s infrared spectral data. The instrument will have much higher spatial resolution than these “global hemisphere” maps with the SpeX instrument. The spacecraft’s closest approach geometry will be the anti-Charon hemisphere (180 deg E). This will be ideal for probing the strongest CO signatures.

Noemi Pinilla-Alonso (University of Tennessee) provided a talk on “IRAC/Spitzer Photometry of the Pluto/Charon System.” With warm Spitzer/IRAC they took images in four bands probing the 3-5 micron range. Their intent was to look for the mid-infrared spectral signatures of N2, CO, CH4 ices and tholins, all which had discovered in the near-infrared (1-2.5 microns). They covered 8 longitudes with their observation set.

Results. Their data confirms the surface heterogeneity that was measured by HST (Marc Buie). They also found their “slopes in color with wavelength” do have a longitude dependence and fall into two groups 160-288 deg Longitude and 234-110 deg Longitude. Both N2 and CO are also found to be strong at 180 deg Longitude at mid-IR wavelengths. This agrees with Will Grundy’s measurements at shorter wavelengths from the IRTF (see above, this blog entry).

Jason Cook (SwRI) presented a talk on “Observations of Pluto’s Surface and Atmosphere at Low Resolution.” Intrigued by the ethane (C2H6) detection (De Meo et al 2010), he got the new idea to look for it this in old data he took in 2004 using the Gemini-N NIRI instrument, with R~700 (low resolution) spectroscopy. In his analysis, he had to include the C2H6 ice contribution to make a fit of ice abundances to the data. He was able to fit multiple methane bands and derive comparable amounts that agrees with other published methane detections at higher resolution.

Implications for New Horizons. The big take-away is that low resolution spectra with high signal precision are capable of detecting Pluto’s atmosphere. New Horizons LEISA spectra has R~500 so this data example is an excellent comparative data set. He is eager to talk with others who have low-resolution spectra of Pluto or Charon to apply the new analysis techniques.

Next, Emmanuel Lellouch (Observatoire de Paris, France) gave a talk on “Pluto’s Thermal LightCurves as seen by Herschel.” He ended his talk sharing tantalizing science on TNO temperatures from thermal measurements with Herschel and optical measurements used together to measure the diameter, albedo, and thermal inertia. They derive that TNOs have low thermal inertia (2.5 +/- 0.5 MKS), lower than Saturn’s satellites (5-20MKS), Pluto (20-30MKS), and Charon (10-20 MKS). More details can be found at http://meetingorganizer.copernicus.org/EPSC2012/EPSC2012-590-3.pdf.

Moving further out beyond the Spitzer/Herschel far infrared, into the sub-millimeter range, Bryan Butler (NRAO) talked about  “Observations of Pluto, Charon and other TNOs at long wavelengths.” As you go to longer wavelengths, you are less affected by solar reflection. You become dominated by the thermal emission from the body itself.  But the emission at these wavelengths will be weak such that building highly sensitivity instruments is key, such as ALMA (in Chile) or updated VLA, called the EVLA (in New Mexico). They have been using ALMA and EVLA to observe Pluto and Charon in 2010-2012 and they had to remove the background contribution as Pluto had been moving through the galactic plane in this period. 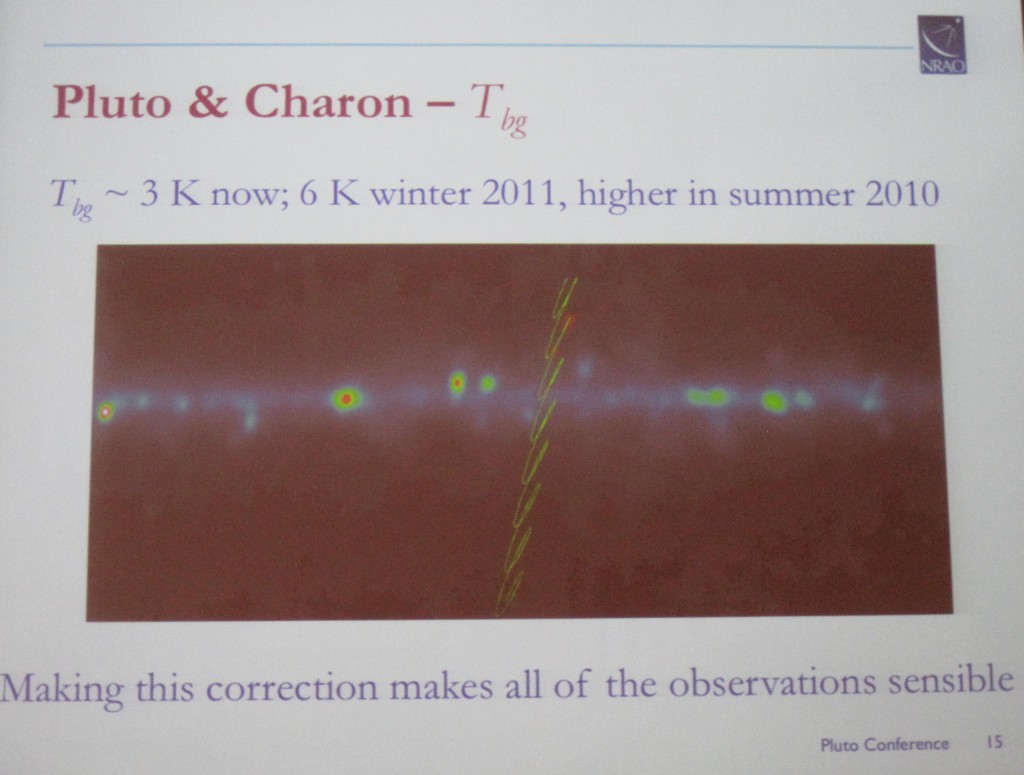 The path of Pluto is shown with the green line that appears to make loops. This is the path of Pluto projected against the sub-millimeter. The enhanced horizontal signal is strong submillimeter thermal emission from the plane of the Milky Way. This caused an undesired extra background signal that needed to be removed from data taken in the 2010-2012 time frame.

What’s Next? They wish to use ALMA to study Pluto & Charon and also attempt to detect Nix & Hydra, if they fall on the larger size. ALMA will be used to observe TNOs  and will have the capability to  resolve the largest TNOs like Eris (size ~2400 km diameter). They predict they can make high-SNR images of Pluto, but barely resolve Charon within a short observation time. To get high-SNR images of Charon would take more observatory time than they think would be awarded for a single object. 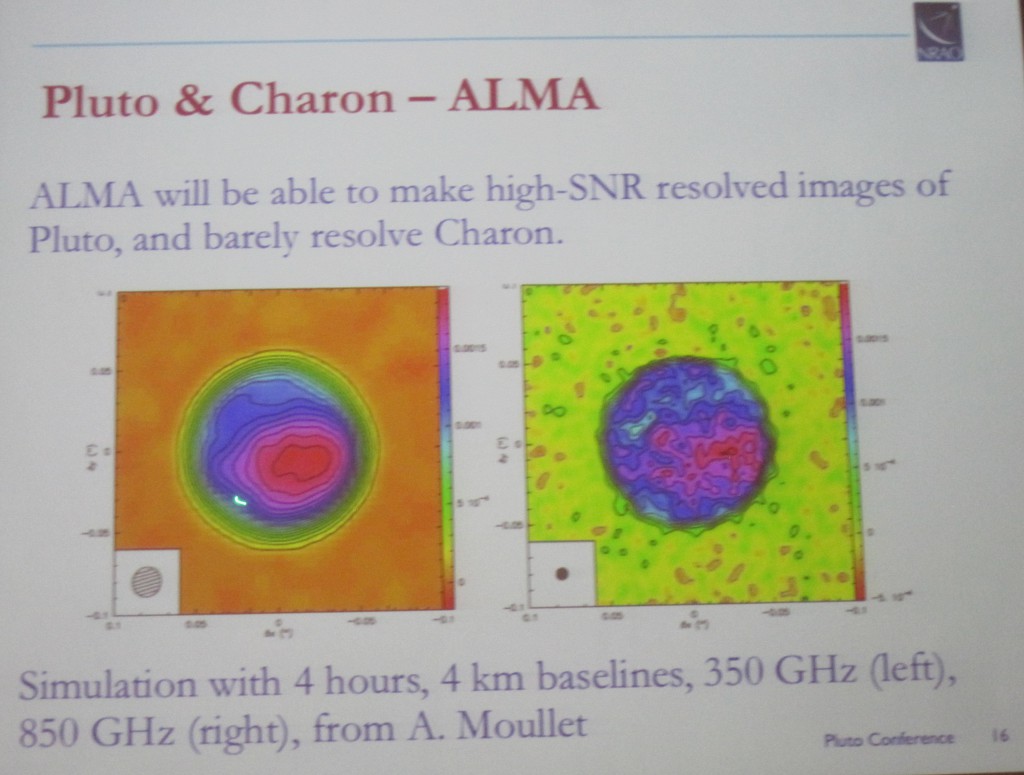 Switching away from the infrared and sub-millimeter and moving back to the ultraviolet Eric Schindhelm (SwRI) gave the final talk in this session entitled  “FUV Studies of Pluto and its Satellites: From IUE to New Horizons.” IUE took the first UV spectra of Pluto in 1987-1988. This was confirmed with HST using the FOS (Faint Object Spectrograph) instrument in 1992. After 17 years, the HST COS (Cosmic Origins Spectrograph) instrument was used to observe two different longitudes, and they found some differences between the two data sets. The COS data indicated an absorption feature at 2000-2500 Angstroms (see Dale Cruikshank talk summary above), and it was suggested this is a hydrocarbon creating this feature. 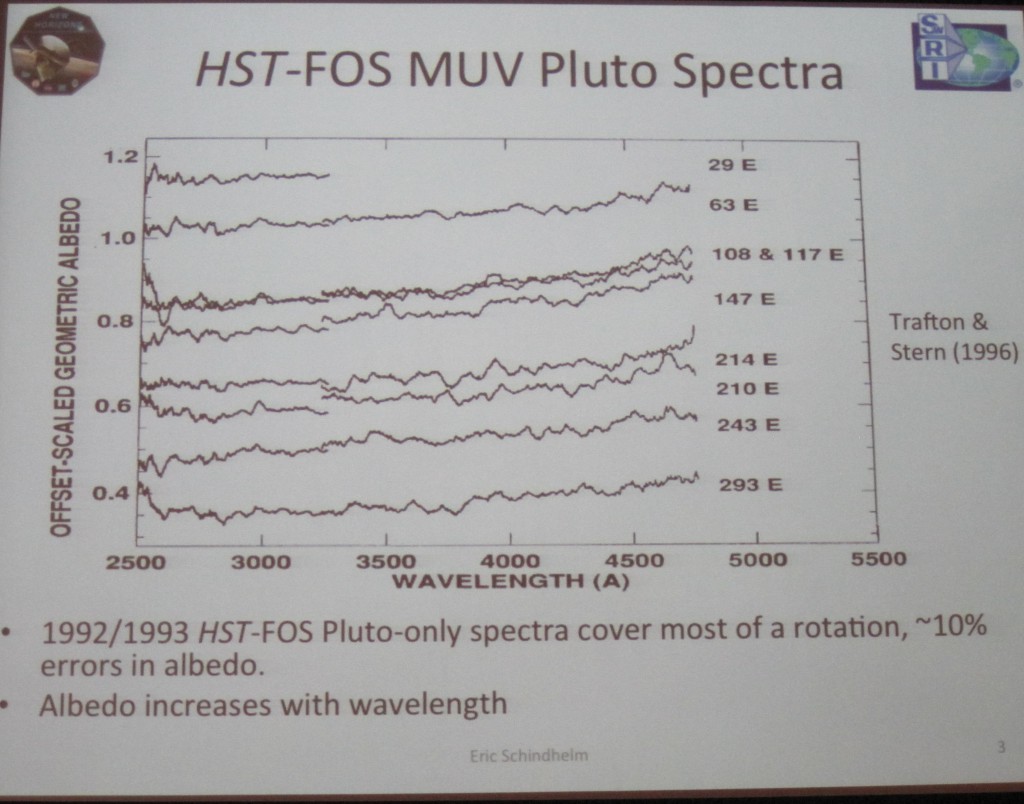 Eric Schindhelm next described New Horizon’s Alice instrument measurements and predictions  for the Pluto and satellites during the New Horizons fly-by. He also summarized that more lab H2O, NH3 and CO2 ice FUV reflectance spectra is needed for interpretation of these data sets.

Predictions for New Horizons. Pluto’s UV reflectance spectra will be limited due to faint signal and atmosphere absorption. Nix and Hydra will be barely detectable in FUV. Charon’s albedo for wavelength longer than 1200 angstroms should be detectable and they expect to get albedo, color and composition. They also expect to distinguish between different mixing ratios of the ices (ratios of H2O to NH3, H2O to CO2, etc.) with the UV spectra obtained by New Horizons.

Although the predictions for detecting Pluto’s surface composition in the UV with New Horizons’ Alice instrument are expected to be limited, the Alice instrument will also be measuring Pluto Atmosphere (and searching for an atmosphere around Charon), which is its main purpose and directly addresses a prime Group 1 science goal.

Bring on the spectra!