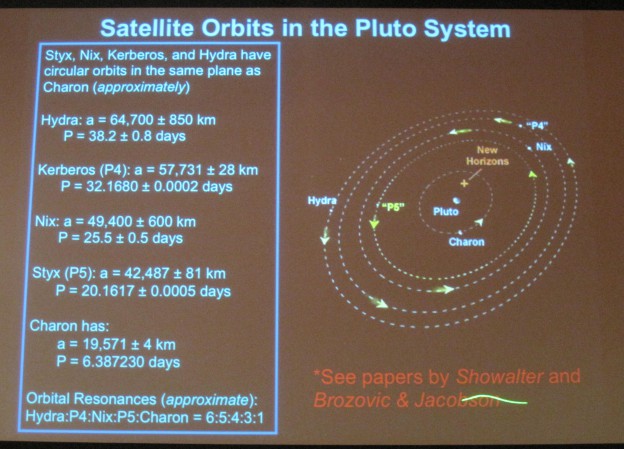 Continuing this series of talks from the Pluto Science Conference being held July 22-26, 2013 at the Johns Hopkins University Applied Physics Lab (APL) in Laurel, MD. This blog entry highlights a selection of talks on Small Satellites the afternoon of July 23rd. 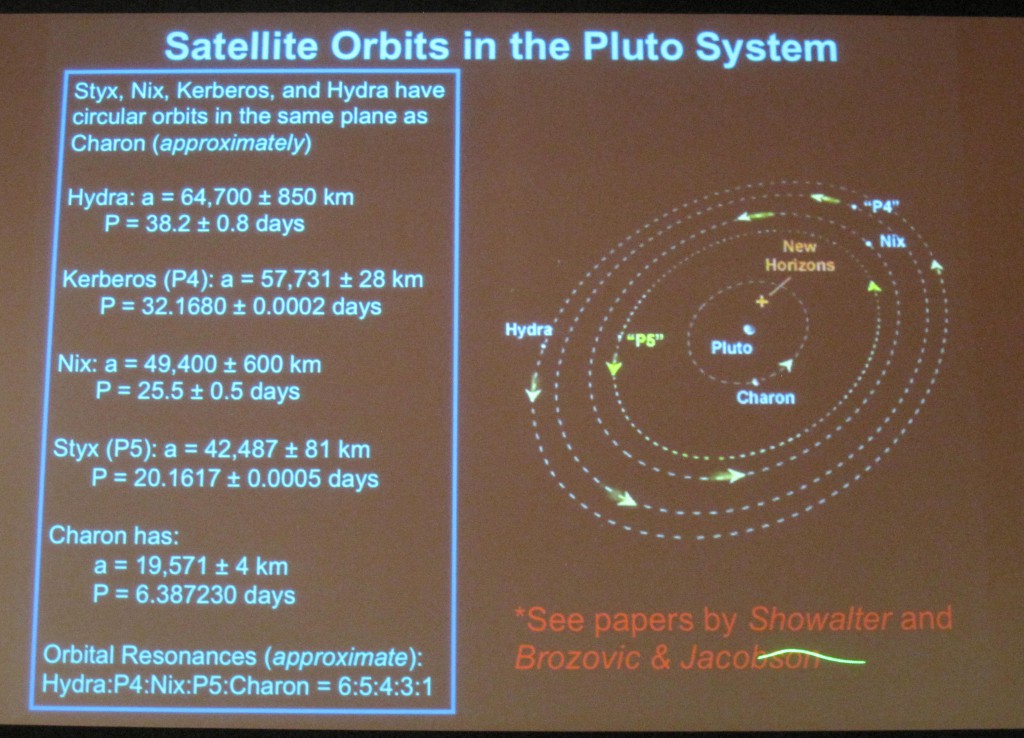 The Pluto system at a glance. Key top-level parameters of the satellites a=semimajor axis (from the Pluto-Charon barycenter/center of mass) in kilometers, P=orbital period in days. The moons appear to be in orbital resonances Hydra:Kerberos:Nix:Styx:Charon = 6:5:4:3:1.

What about their albedo? Albedo is a measurement of a body’s reflectance, a reflection coefficient, where an albedo equal to 1 is “white” and an albedo equal to 0 is essentially “black” (e.g., dirty snowballs like comet nuclei have albedos ~0.04). It should be noted that albedo values can be functions of color (wavelength of light). We know that Pluto has an albedo ~0.5 and Charon has albedo ~0.35. Regolith exchange and dynamics agreements favor albedo ~0.35 for these small satellites, and assuming that density=1 (icy body).

What are implications of these small satellite discoveries? These questions were posed: (1) Pluto system is highly compact and rich, so are there more satellites not yet discovered? (2) Was there a giant impact origin of Pluto System? (3) Could rings also form? (4) Could other large KBOs have multiple satellites? (We know Haumea has 2 companions. Could there be others?).

What role will New Horizons bring? New Horizons will play a key role for small satellites, measuring their size and their shapes. Note: Additional occultation observations from Earth could reveal additional satellites and also provide measurements of their sizes, but not shapes.

At the time of Kerberos & Styx’ discovery, the New Horizons Mission Ops team had already designed the Pluto science sequence of observations to run aboard the spacecraft.  In the spirit of exploration,  the team had wisely reserved a few TBD (to be determined) observations that they now have placed observations of Kerberos and Styx that fit within the constraints. Firm flexibility at its finest.

For more details about their paper on the formation of Pluto’s low mass satellites is found here http://arxiv.org/abs/1303.0280.

What role will New Horizons bring? New Horizons can test these predictions if they discover more satellites when they look at the Pluto system on approach and departure.

Peter Thomas (Cornell University) and Keith Noll (NASA GSFC) provided a talk about “Pluto’s Small Satellites: What to Expect, What They Might Tell Us.”

Small satellites of planets: variety and dynamics role. We have a small selection of satellites of 20-100 km range (e.g. Metis, Amalthea, Thebe, Atlas, Prometheus, Pandora, Epimetheus, Janus, Hyperion, Phoebe and asteroids Mathilde, Eros, Ida). Best “comparatives” come from the Saturn family from amazing Cassini images, but these divided into two groups whether they are located within the ring arcs or not. Small satellites are irregular in shape, have high porosity (40-70% void space), weak (tidally fractured), crater morphology varies, regolith depths & distribution over surface, icy & rocky, and some have albedo markings. 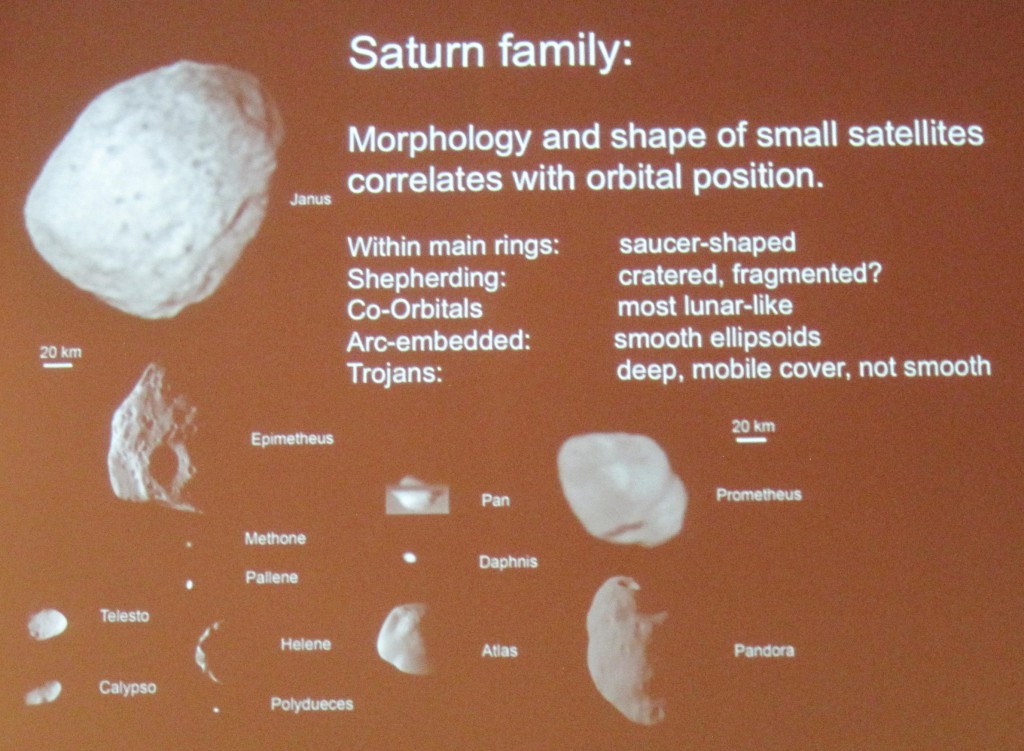 Predictions for New Horizons. Peter Thomas is excited to see New Horizons’ images of the small satellites. He predicts they will not look like egg-shaped. Thomas’ Best Guess: A Deimos/Hyperion hybrid morphology.

KBOs and their satellites: variety and collision role. There are three multiple systems known in the Kuiper Belt: Pluto (6 components), Haumea (3 components) and 47171 1999 Tc36 (3 components). There are also 74 binary systems to date. The Pluto system is collisional. Unfortunately most of the KBO binaries have too low angular momentum to imply a collisional origin, but there is a subset of TNO binaries that could be a comparative set. Multiple collision systems in the Kuiper Belt could serve as possible analogs of the Pluto system. 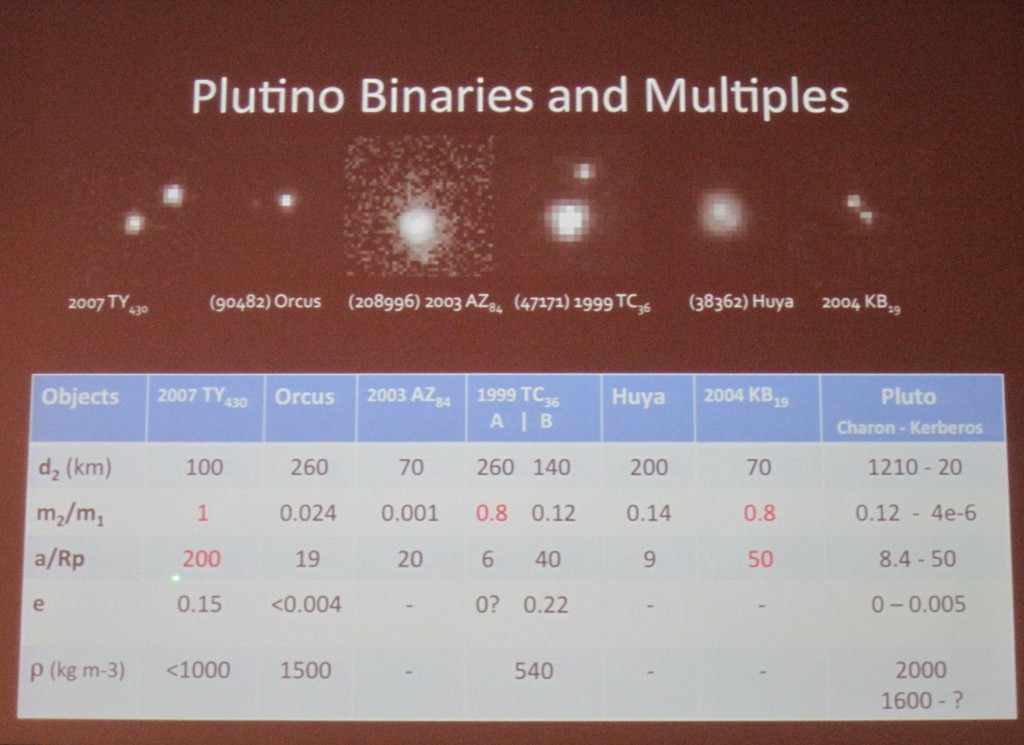 Plutino binaries (above) are also “comparatives” images for describing Pluto’s small satellites. Other comparative bodies, which may have collisional origin could be Quaoar, 1998 SM165, Salacia, and Eris.

Predictions for New Horizons. New Horizons will tell us a lot about KBOs and test open theories about their formation and collisional history.

Mark Showalter (SETI) on “Orbits and Physical Properties of Pluto’s Small Moons Kerberos (P4) and Styx (P5)” began with “Well, they are not your typical orbits.” The orbits of all the small satellites do wobble with a periodicity defined by Charon. Essentially the system acts like a “time-variable center gravity field.” There are nine orbital elements to fit (semi major axis, a; mean longitude at epoch, theta; eccentricity, e; longitude of pericenter at epoch, w; inclination I; longitude of ascending node at epoch, Omega; mean motion, n; pericenter precession rate dw/dt; nodal regression rate dOmega/dt.). He provided updated parameters for the moons based on this work.

Mark Showalter (SETI) next talked about his preliminary work on “Chaotic Rotation of Nix & Hydra.” He started the presentation with a light curves for Hydra & Nix made the 2010-2012 HST data sets. They do not follow the expected “double sinusoidal.” When plotting phase angle vs. time, Hydra and Nix do get brighter with lower phase angle and he used this information to normalize their light curves. He found that Nix & Hydra’s brightnesses do not correlate with their projected longitude on the sky. They are probably not in synchronous rotation. Also, he is not finding any single rotation period compatible with the data series he has.

His premise is that Nix and Hydra are not following your typical rotation, and are very heavily influenced by the Charon-wobble. Best Guess: Hydra and Nix are in a state of “tumbling.” Bodies that not synchronous have no way to get to synchronous lock.

Until now, Hyperion (one of Saturn’s moons) had been the only chaotic rotator. Not any more! It’s got company!

Marina Brozovic (JPL) spoke about “The Orbits and Masses of Pluto’s Satellites.” She used Pluto & Charon data from photographic plates (1980s), ground-based VLT AO data (1990-2006) and HST data (1990-2012); Nix and Hydra data from HST and VLT AO (2002-2012); and Kerberos and Styx data from HST (2010-2012) to derive orbital parameters for these bodies. They have created plu041 and plu042 ephemeris solutions (i.e. where all the satellites are in the system with time), the latter where they provide orbit predictions for the four smaller satellites. And, they have found interesting puzzles as they are working to find solutions for the new satellite masses. She presented orbital uncertainties at the time of the New Horizons encounter (July 14, 2015).

Andrew Youdin (JILA, CU Boulder) “Using (the stability of)  Kerberos to Weigh Nix & Hydra.” He looked at what was done on the HR8799 (Skemer et al 2012) exoplanet system, where orbital stability technique was used, and applied it to the Pluto System. Kerberos/P4 does appear more unstable, but Styx/P5 may be more stable. To derive the necessary masses for orbit stability, when compared with measured brightnesses, means comet-like albedos are ruled out for small Pluto satellites. Instead, they would have high albedo, clean-icy surfaces. No dirty snowballs here.

Andrew Youdin’s paper on using the P4 data to help constrain the masses of Nix and Hydra can be found here: http://arxiv.org/abs/1205.5273. 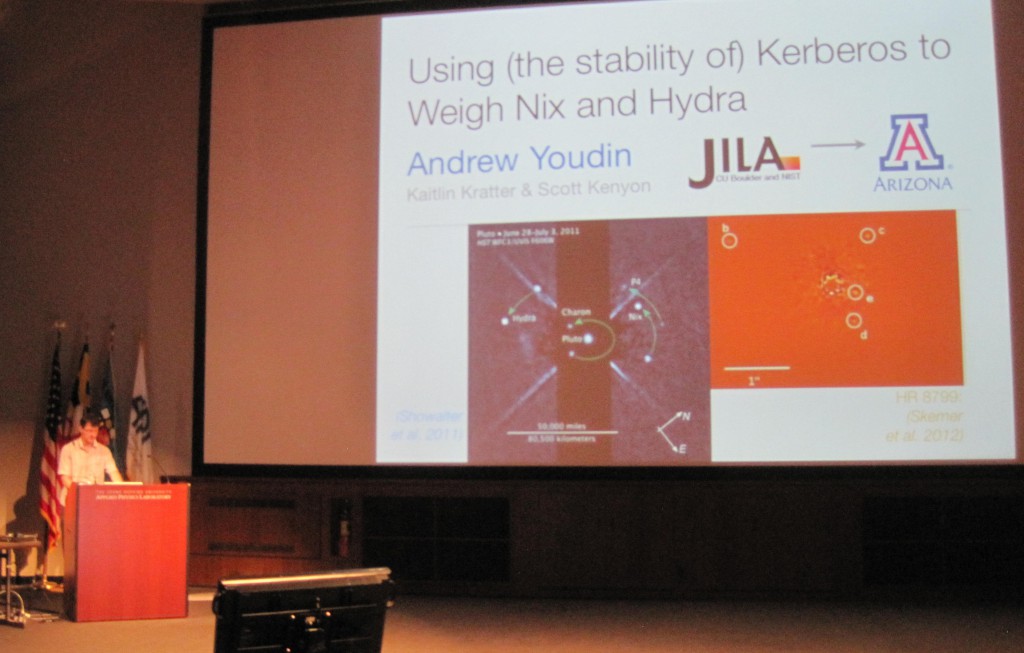 Andrew Youdin at the beginning of his talk called out a visual comparison between the Pluto System (left) and the exoplanet system HR8799 (right) 129 light years away characterized by a debris disk and four massive planets confirmed by direct imaging. It served for his inspiration to apply fitting. techniques to the Pluto System small moons. “Pluto’s not a planet. It’s better. In miniature, it’s the richest circumbinary multiplanet system.”

Alan Stern (SwRI) on “Constraints on Satellites of Pluto Interior to Charon’s Orbit and Prospects for Detection by New Horizons.” Alan Stern asks, “Could there be moons inside Charon’s Orbit?” Charon is a big vacuum cleaner, and clears out a big swatch called the CIS, the Charon Instability Strip, clear down to 0.45-0.47 Pluto-Charon separation. Atmospheric drag by Pluto’s atmosphere could also add in the clearing-out the region. Charon’s eccentricity also constrains the problem. And when you combine the recent HST data detection limits, you only have a region from 0.2 to 0.45-0.47 Pluto-Charon separation (the outer edge of the CIS) where you could possibly have moons.

What role will New Horizons bring? New Horizons will do a deep satellite search with the LORRI instrument at seven days prior to Pluto closest approach. This search will reach 6x fainter than current limits set by HST for Pluto companions, to detect objects down to ~1.2 km. If New Horizons does find satellites within Charon’s orbit this will provide new insights into satellite system origins. 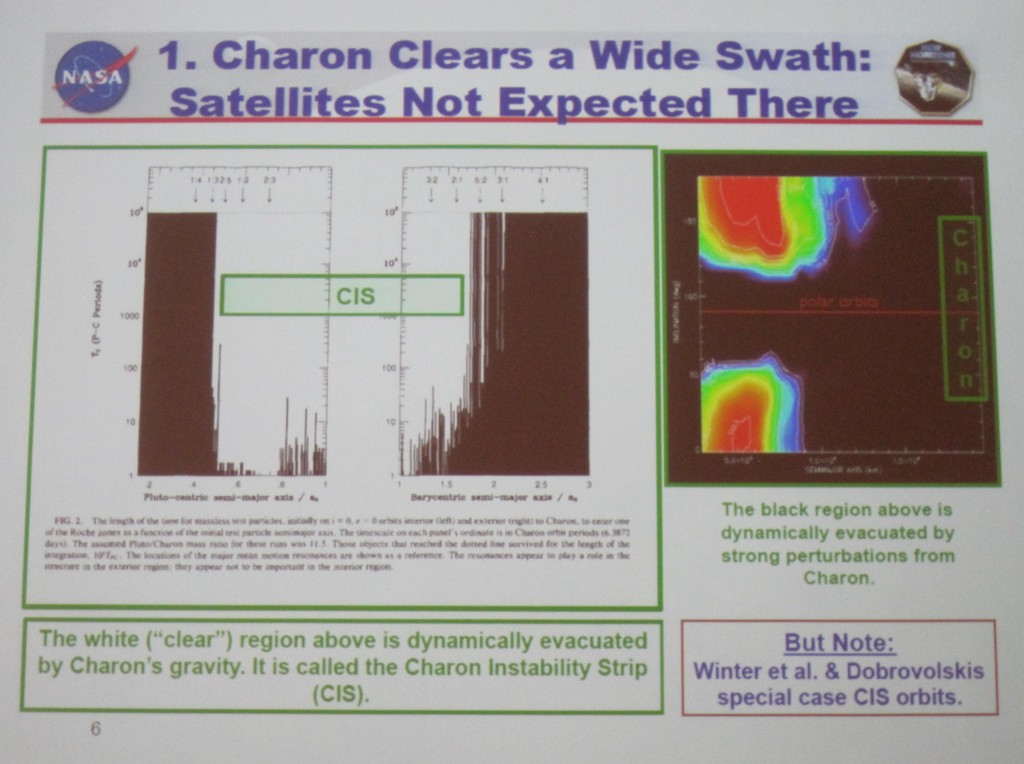 Charon has been a major player in the determining where debris in the Pluto system could remain stable. The Charon Instability Strip is a region between Pluto and Charon that is kept relatively free because of Charon’s gravity.