This is a blog series covering the talks presented at the Pluto Science Conference, held July 22-26, 2013 in Laurel, MD.

In an engaging talk by Amanda Zangari (SwRI) entitled “Plutography: A Meta-Analysis of Coordinates on Pluto From Charon’s Discovery to the Present Day,” she compared and contrasted two coordinate systems used by Pluto researchers. Her motivation is that data sets, past, present and future will be compared to the New Horizons dataset, and so it will be very important that all use the same coordinate system. 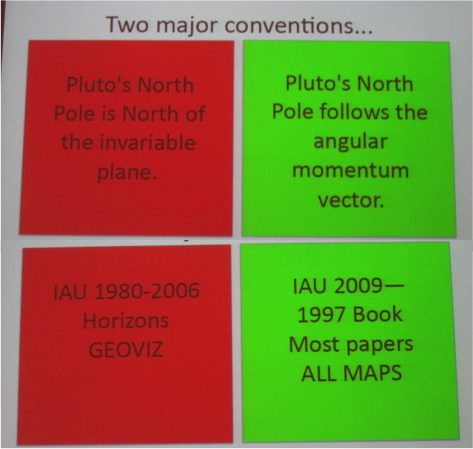 It comes down to two coordinate systems, although she mentioned that some researchers sometimes use a hybrid-definition.  In her visual summary, the Red (left) is the Ecliptic North configuration where Pluto’s North Pole is “North of the invariable plane.” The Green (right) is the where “Pluto’s North Follows the Angular Momentum Vector” aka Right Hand Rule (RHR).  When the planet’s north pole is aligned closely with the Ecliptic North, the former is normally okay (like for Earth). However, for Pluto, Uranus and Venus the two are definitely very different. She suggests that the Right Hand Rule is the more appropriate definition for Pluto. Note that JPL Horizons (their official ephemeris generating software), GEOVIZ (New Horizons Planning software) and SPICE uses the other convention (Ecliptic North Pole).

How they differ are summarized below (i.e. both axes are flipped). The pole that is visible from Earth is what is seen in the lower-right quadrant of each schematic. Since the 1980s we have been is observing Pluto’s Northern Pole per the Right-Hand-Rule (RHR) convention. 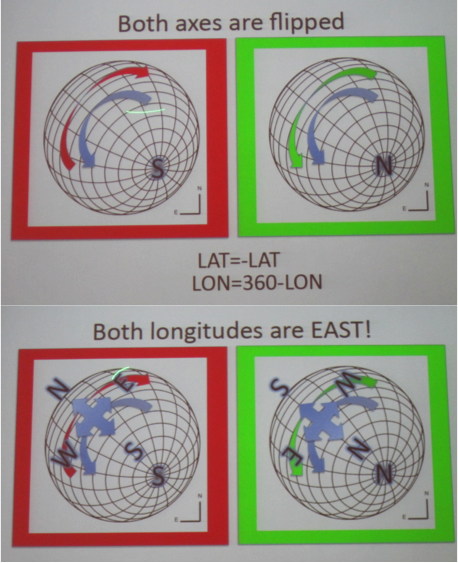 Alan Stern, New Horizon’s Principal Investigator (lead scientist) mentioned that the New Horizons Spacecraft will not change its system prior to the Jul 2015 encounter. After the encounter, the plan will be to adopt the new SPICE files, etc. He stressed that Pluto Data that gets released in the Planetary Data System will be in the Right-Hand-Rule convention (RHR). Leslie Young, New Horizons’ deputy Project Scientist, said that there are new SPICE files available using a Pluto coordinate system using the RHR Convention, although the JPL/SPICE official release  is still Ecliptic North.

So, huh, which way is up? I’m sure this topic is far from over. In fact, during discussions at the meeting, agreeing on a coordinate system for planetary bodies is no stranger to this community.